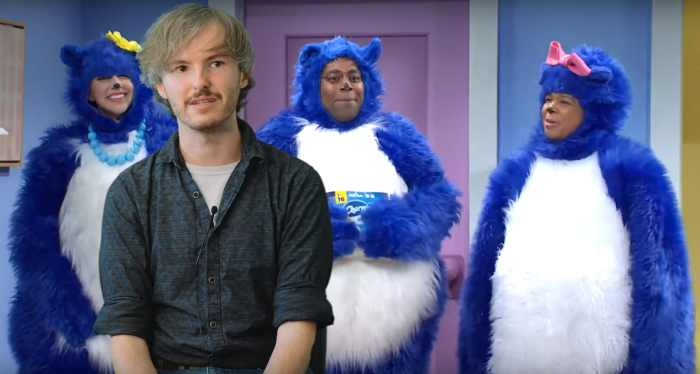 I don’t watch much Saturday Night Live. The show’s not really a thing over here in the UK. Obviously as someone who writes for an American pop culture website, I’m more aware of it than the typical person here—I have a rough idea of who’s on it (by face, not by name lol—that’s always something like ‘Mickey Doi’ or ‘Seb Nooney’), and I see the odd sketch here and there—but still I’d say that my exposure to the show is what I’d class as ‘minimal’. Based on what I do see, I’m pretty happy with that level. It’s not exactly a searingly original insight to say that SNL is, for the most part, painfully unfunny and politically atrocious. I mean, Kenan’s a reliable presence (and deserves some sort of award for sticking it out on something so awful for so long), but what was the last good thing the show did? ‘Papyrus’? Giving us Bill Hader? I’ve no idea. Once in a while something decent will work its way through, but in general I can’t shake the impression of SNL as the epitome of cringe establishment humour.

Which apparently also maybe steals sketch ideas? Possibly? It certainly seems that way once you consider a video that YouTuber Joel Haver just put out, in which he responds to a flood of comments that he’s been receiving aimed at drawing his attention to a recent SNL sketch. The sketch bears more than a passing resemblance to a video that Haver himself made not long ago. To his credit, Haver deals with things just about as graciously as possible. Check it out, and form your own opinion:


← Adam Driver And Greta Gerwig Face Down The Apocalypse In Noah Baumbach's Incomparable 'White Noise' | Remember When Elton John Made a Flop Broadway Musical of The Vampire Chronicles? →