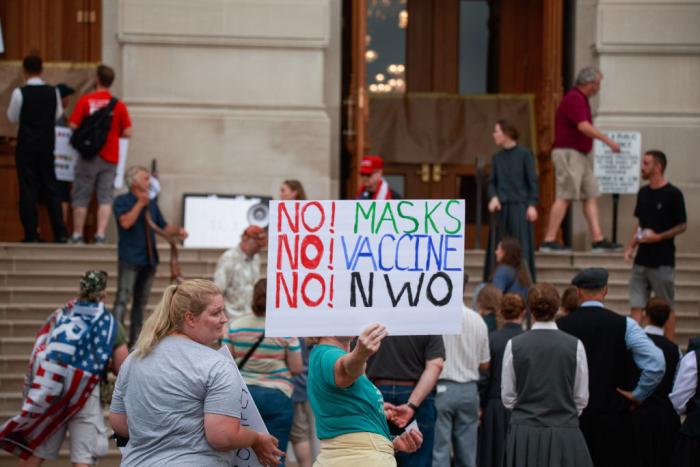 Watch: 'Masks in South Korea Vs. Masks in USA'

A little while back I wrote about how Americans love to rebel against the wrong things. With the usual provisos about applying blanket generalisations to a few hundred million people of incredible diversity, there is something in the American national character that seems to instinctively and violently kick back against perceived slights to individual liberty. The trouble is that this perception of what does and does not represent a threat to liberty has been so grotesquely warped by hundreds of years of capitalist indoctrination that the concept of ‘freedom’ itself has lost all meaning. To the powers that be, it is very convenient indeed that ‘freedom’ has come to mean the ability to choose from countless minute variations of toothbrush, rather than the peace of mind that comes with knowing that should you fall ill, a healthcare system will take care of you should you need it, regardless of your ability to pay. The capitalist establishment structure absolutely loves the fact that ‘freedom’ now means the power to stare forlornly through a shop window at a display of unaffordable, overpriced shoes manufactured by racist sweatshop labour halfway around the world, instead of, say, the ability get around your city or country affordably without the need for a fossil fuel burning car. And it’s really great for some when ‘freedom’ is the low, low bar of being able to insult your leaders without being dragged off to a secret prison somewhere. To be able to replace them with an actual alternative, though? That would, naturally, be too much freedom.

Right now, in the bullsh*t capitalist and reactionary-stoked ‘culture war’ landscape designed to separate the populace at a time when they might otherwise dangerously unite in a broad class-focused coalition against the powers that be, ‘freedom’ has come to mean a new thing: Not wearing a mask during a global pandemic. This is how they intend to cleave us in two. And it seems to be working. As an interesting contrast, one can look at South Korea. South Korea is a country that in many ways suffers the malady of neoliberalism just like much the rest of the world: Hyper-liberalised markets, the power of collective labour weakened by anti-union legislation, privatisation of public enterprise. All the great neolib hits! Naturally, it is nowhere as far along that road as that neoliberal paradise, the US, but there are some similarities within the guiding principles of the two countries’ politics. Nevertheless, as it is still not as much of a dystopia as the US, South Korea can, when necessary, still marshal state power to do some good. Case in point: Covid-19. Despite its proximity to China, South Korea has had one of the smallest death tolls due to the pandemic to date, with the figure something under 300. The US has the worst death toll in the world. (Who has the best? Vietnam. A country of nearly a hundred million people, which shares a 1,300 km land border with China, and which is still suffering the effects of the brutal war crimes inflicted on it by the US. Socialist Vietnam has had zero deaths due to Covid-19.) Naturally, some thought must be given to the fact that mask wearing as a form of disease transmission prevention is far more common in some East Asian countries than in much of the world, but still: How does the picture compare when it comes to wearing masks in South Korea VS. the US?

← Baseball Is Back, But Even That Is Political | Disney+, Peacock, and Other Streaming Platforms Are Screwing Us →