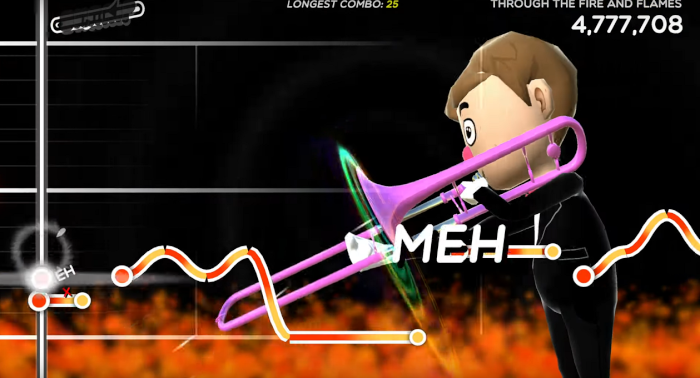 I’m sure by now everyone has heard the words ‘trombone champ’ bouncing around on the internet, together, in that order. I’m sure also that there is a probably fair split between those who fully understand the ramification of those words and those who have not yet been blessed with the light of hallowed knowledge. It’s not possible to keep up with everything on the internet or in pop culture overall of course—I would know, as on some things I’m ignorant to a blessedly high degree—so it’s okay if the words ‘trombone champ’ don’t mean much at all to you just yet.

So let me let some light into your world.

Trombone Champ is a PC game, modeled after similar, earlier, rhythm games like Guitar Hero. The core gameplay loop is the player matching their inputs to what appears on the screen, in time to some music. It’s a basic key ingredient, but rhythm games have harvested some truly great gains from it. Perhaps none have harvested something quite so divine, however, as Trombone Champ—which, as you may have guessed, centres on the trombone. One of nature’s funniest instruments. Because there are no distinct inputs like in something like Guitar Hero, in which a certain button corresponds to a certain note, the hilarity is amped up to a whole other level. In Trombone Champ you are free to slide your mouse along the whole spectrum of tones in order to try achieve the desired note.

And thank god for that creative decision.

The glowing reviews on the game’s Steam page agree:

‘I don’t have a problem. I can quit anytime.

and of course
‘toot’.

If you’re having a day that needs brightening, I implore you to seek out any number of Trombone Champ videos. What I will leave you with here is a taste of the gonzo genius that awaits you. It’s a powerful taste, mind you, as it’s the natural state that all rhythm games must settle into sooner or later: a version of DragonForce’s ‘Through the Fire and Flames’:


← What the Hell Happened to 'The Goldbergs': David Hasselhoff Edition | 'The Rings of Power' and the Connecting Thread of Fire →