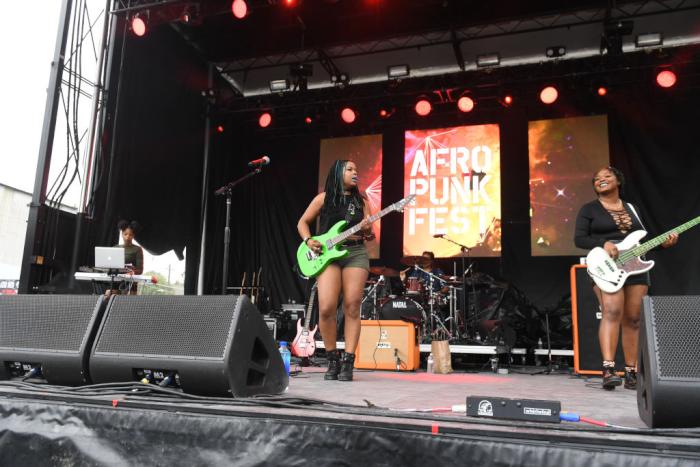 The TxLips Cover 'Smells Like Teen Spirit' and It Is Perfect

Gabriella ‘Guitar Gabby’ Logan is a musician from Atlanta (with a background in environmental and music law, which is just an extremely badass thing to be able to put as some parenthesis). Around 2016 she formed the The TxLips, a band and touring collective made up of a rotating cast of female and non-binary Black musicians. As band leader and manager, Guitar Gabby has a very defined and focused view of her mission. As per an interview in Performer:

The reason I started [The TxLips] […] was because I realized that there’s a very large gap in the music industry that needs to be filled by Black women’s voices and our images being involved in marketing, being on panels, being on the business side, the legal side.

We’re not as present as I believe we should be, so I wanted to create a platform for Black women to be able to participate in music, whenever they wanted, however they wanted.

Guitar Gabby and The TxLips’ music can be quite eclectic, though its all shot through with tasty vocal melodies and strong, often slightly fuzzed, guitar work, evocative of the greats of ’90s alternative rock. It’s good stuff. You can stream it here and support them on BandCamp here. I bring up the group here though because of a dynamite cover they recorded last year. Lord knows I’m a sucker for a good cover version. Before today I’d never really heard a satisfying cover of Nirvana’s towering ‘Smells Like Teen Spirit’, but now, thanks to Guitar Gabby and her crew, that’s all changed. I really love this version. As far as cover re-arrangements go, it plays things relatively straight. It doesn’t take it to dramatically different places, compositionally speaking—the biggest divergences are in the intro and in the middle eight, as well as the tasty arrpegios added to the verses—but it channels the ineffable attitude of Nirvana’s original in ways that eludes most bands attempting to cover it. Check it out, and enjoy:

← In 'You're Old' News: Millie Bobbie Brown Is Dating Jon Bon Jovi's Kid | FX's Comedy 'Dave' Provides Us with the Most Unsettling Scene of 2021 →