How Far Can You Make It Through This Video?

Rooftopping, or roofing—the practice of (often illegal) extreme height urban climbing—has been around for a good number of years. It’s with the ascension of social media and the easy exposure afforded by YouTube and similar platforms, however, that the death-skirting movement has really—ahem—reached new heights. As with any similar phenomenon, it is hard to pinpoint an exact beginning, or to highlight any one person who may have been the progenitor, though many people often cite Tom Ryaboi, a Canadian photographer, as being a good candidate.

Tom is a pretty great photographer. His Instagram page shows clearly his eye for a fetching composition. Being an avid urban explorer and climber, he knows how to combine the two passions to well utilise the perverse and alien perspectives afforded by his insane vantage points in order to create striking and provocative imagery. It was in 2011 that Tom posted the aptly named photo, ‘I’ll Make You Famous’, which went viral and is now often seen as the inspiration for the modern, spectacle-oriented roofing movement. 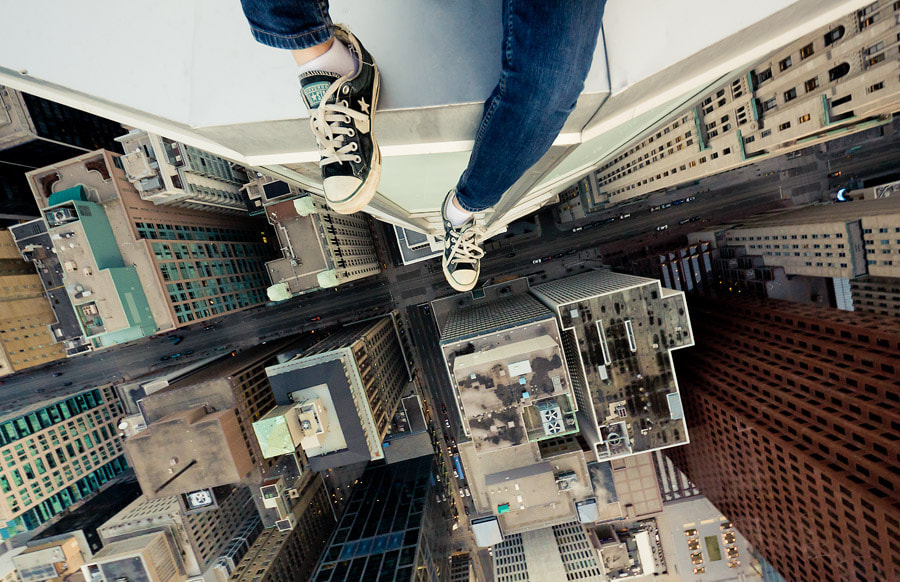 From those relatively tame beginnings, borderline insane things would be born, with roofers from around the world seemingly one-upping each other in their quest to achieve and document the most mind-boggling, stomach-turning climbs.

I have a peculiar fascination with rooftopping. I have a pretty bad fear of heights that is ameliorated greatly if I can grip onto something, even with just one hand. I love being high up, but I hate it. I love climbing, but I’m afraid of falling. So watching the videos of these people stirs a wealth of feeling in me. The transgressive, adrenaline-pumping thrill of ascending to such delirious heights, purely by the power of one’s own hands and feet. The paralysing fear of staring into such an unfathomable void, knowing that the smallest mistake could exact the biggest price. The videos have me transfixed, really feeling the climber’s journey. It’s a lot to take in. And I almost know I shouldn’t be watching. That to watch is to give validation to behaviour that will almost certainly at some point lead (and actually already has led) to a tragic end.

But I can’t help it. When I watch this stuff, my emotions are in almost perfect balance. Look away; but keep watching. Most of the time ‘keep watching’ wins, but some of the videos really push that. Case in point:

Don’t mind me, I’ll just be over here, drying the sweat on my palms for the rest of the day.

← Review: Peter Berg and Mark Wahlberg's 'Mile 22' is Tedious and Bad | 'Eighth Grade' and the Flaws of the MPAA Rating System →