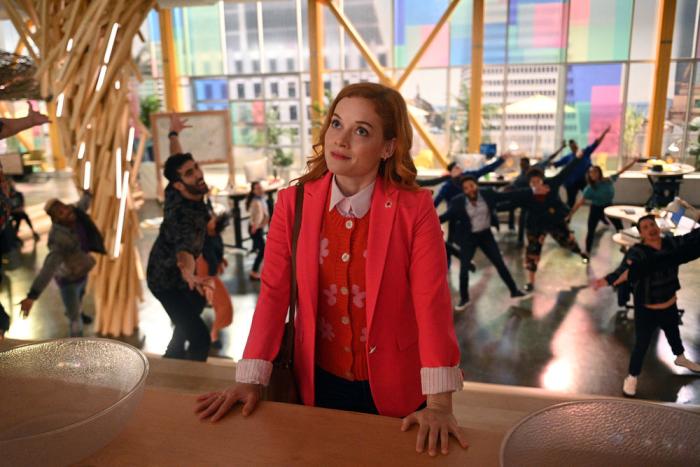 If, for some reason, you aren’t caught up with the show and are reading ahead, then beware of spoilers for the Season 2 premiere of Zoey’s Extraordinary Playlist.

Zoey’s Extraordinary Playlist is back for Season 2 and I’m just so thrilled because it also means the return of normal TV (and by that I mean a series that ignores 2020 completely and lets me live in fantasy). The musical dramedy picks up six weeks after the death of Mitch (Peter Gallagher), Zoey Clarke’s father, and is replete with humor, a seamless (if surprising) exit for Lauren Graham’s Joan, and the confusing, emotional rollercoaster that comes along with grief. The final scene also seems to resolve the love triangle set up in Season 1, which is rather refreshing.

After weeks of being in her room, comfortably numb inside her bubble of grief, Zoey (Jane Levy) finally goes back to work. (Perhaps the most unrealistic thing about the Season 2 premiere is that Zoey took six weeks off of work to begin with. Corporate America is not so kind.) She, along with her brother David (Andrew Leeds) and sister-in-law Emily (Alice Lee) have been living with her mom Maggie (Mary Steenburgen) in the immediate aftermath of Mitch’s death. Each of the family members are handling it differently. Zoey has hidden away while Maggie is attempting to manage Mitch’s financials to distract herself. It also serves as a reminder that there’s much to take care of besides planning for someone’s funeral. David and Emily obviously have a baby to deal with so they’ve been occupied.

Zoey is surprised and overwhelmed by how much has actually changed while she hasn’t been focused on the daily grind. SPRQ Point has hired a new guy named George (Harvey Guillén) to replace Max (a now-bearded Skylar Astin); Joan wants to promote Zoey to executive director; Mo (Alex Newell), Max, and Simon (John Clarence Stewart) have been hanging out a lot and are now really good friends; Max is finally making progress on his app, working with Mo to bring it to life. Zoey feels out of the loop, like a fish out of water struggling to comprehend what the hell was going on around her.

What she quickly realizes is that, despite the fact that her world has been turned upside down, the world has gone on whether she likes it or not. Zoey can’t quite grasp the concept and it’s not hard to understand why. Zoey’s Extraordinary Playlist carries on in its handling of grief and the strange feelings it dredges up, gently exploring the lonely space it occupies, the emptiness that hits like a punch to the gut, and the deep-seated pain it begets. Zoey has a hard time picking herself up and going back to normalcy because her whole world has shifted and yet only she is distressingly aware of it.

But, the fact is that she has changed and not the world, and the series understands how isolating and disconcerting that can be. It’s as if the rug has been pulled out from under her and she’s just trying to get her bearings without falling into a black hole of despair. A big part of the reason why I love this show so much is because it’s able to capture the nuances of emotion and loss so poignantly. It’s deeply affecting and, in the case of this episode, hits close to home.

I lost my grandfather in July. There are times when his absence is so intensely felt that it leaves me breathless. Other times, the memory of his voice or stories shared among family, if fleeting, are warm and comforting. To watch Zoey work through all of these feelings onscreen is so refreshing, as it isn’t often that shows dig into the myriad of emotions that are brought on by loss so thoroughly and realistically as Zoey’s Extraordinary Playlist does. And this is all while maintaining the lighthearted tone and spirit of the show, which is no easy feat.

I’ve mentioned before how the dramedy handles the love triangle between Simon, Max, and Zoey. As is usually the case with love triangles, most shows like to draw them out for as long as possible. It’s either that or they capitalize on the will-they/won’t-they style of storytelling that is overdone and overrated. Showrunner Austin Winsberg hinted last year that Zoey’s Extraordinary Playlist wasn’t done with the triangle, but the Season 2 premiere took a leap by pretty much having Zoey choose Max in its final minutes.

Did I want it to last just a teeny bit longer? Sure, but it’s also nice that the writers decided not to string along the audience for too long. It was a lovely surprise. And besides, some of the most interesting drama actually happens when characters are actually in the relationships dramas dangle in front of us for so long. That’s where the series has the potential to shine and I’m glad it was brave enough to do it. What Zoey and Max’s relationship will be like moving forward is unclear. But, so long as the story doesn’t sideline Simon in the process, there’s hope.