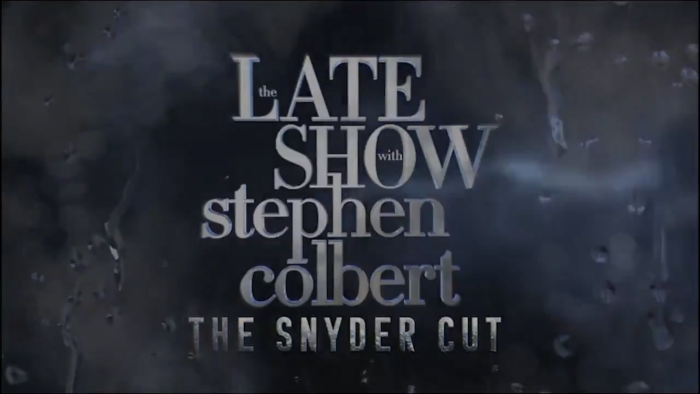 Honestly, though, as divisive as Snyder and his movies may be, his appearance on A Late Show With Stephen Colbert was fantastic. To promote his latest film, Army of the Dead, Snyder appeared in a taped segment to reboot Colbert’s show all dark and gritty. Right off the bat, it’s clear that Snyder is cool with poking fun at himself, which only helps with any sketch. They joke about his love of greenscreen, his penchant for getting his actors all shredded, and his love of slooooooo-moooooo.

An added bonus to all this? Snyder himself is damn good in the sketch! His delivery is solid and self-aware. It feels like a sketch where the people involved are having a good time. No one is having as good a time as Jon Batiste, but that’s always true. His turn as a zombie here is nothing short of hilarious.

Netflix has spared no effort promoting Army of the Dead and they put Snyder at the forefront of it all. He’s done every interview imaginable except for maybe “Hot Ones” (I think). It’s clear to see why. As an interviewee, he’s been candid and interesting. As a sketch actor, he’s seen here being ready to play and also ready to continue to take shots at Warner Brothers.

I love the DCEU. I love Snyder’s work. I loved this sketch. If you don’t, do not and did not, that’s OK too. It’s 2021, friends, watch what you like and stay away from what you don’t!

Thank you to @ZackSnyder for making time to direct an episode! We present to you The Late Show: The Snyder Cut. #LSSC pic.twitter.com/8WDezblnwn

← Trailer: M Night Shyamalan is Up to His 'Old' Tricks Again | Honest Trailers Takes on the DC Extended Universe →