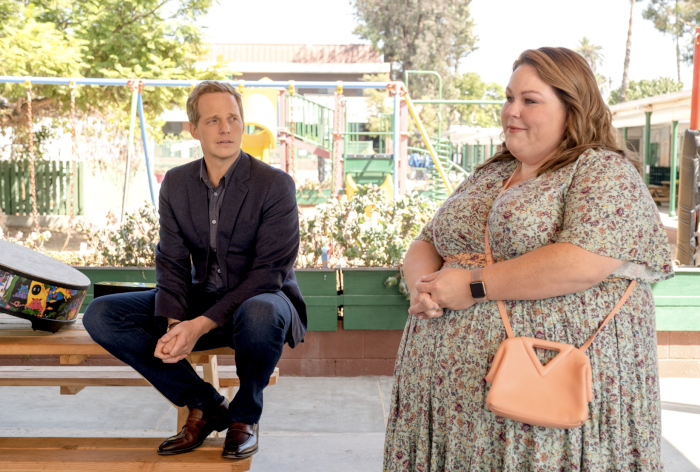 Woo Boy: The 'Blue Valentine' Episode of 'This Is Us' Pours It On Thick

There’s a reason why in all those romcoms, where the woman dumps the boring nice guy for the man of her dreams, the break-ups are usually quick and/or off-screen. Break-ups are not only hard to endure, but they’re also hard to watch and for the better part of the final season of This Is Us, we’ve had a front-row seat to the interminable, excruciating break-up of Kate and Toby. Or, Katoby, as terrible people are wont to say.

It’s been an agonizing viewing experience this season watching Kate and Toby snipe at each other, having a variation of the same fight over and over. Is it real-to-life? Sure! Is it awkward and uncomfortable? Yes! There’s a reason why it’s only possible to watch Blue Valentine once. Divorce is bleak and it chips away at your soul bit by bit by bit until you finally pull the plug, which, like the death of a loved one after a long health battle, is often met with a mixture of overwhelming sadness and relief.

Blue Valentinve, for those who haven’t seen the Ryan Gosling/Michelle Williams film, shifts back and forth between a married couple’s courtship and divorce. This week’s This Is Us had an interesting spin on that: It jumps around in time, shifting back and forth between Toby and Kate’s divorce and Kate and Philip’s courtship. Kate and Toby continue to argue, and no matter how hard they try to make their marriage work, they can’t help but make snide, passive-aggressive swipes at one another over dinner, during marriage counseling, and during awkward family get-togethers. Finally, during one last dinner together, Toby blows a gasket and says what he’s been thinking this entire time: That Kate resents that he’s not as good as her father, Jack Pearson, the mythic husband and father who has been hanging over everyone in the Pearson family since his death (not living up to Jack has been a recurring theme this season). Kate finally says, “It’s over,” and the divorce proceedings are put into motion.

The episode begins with Toby calling Kate on her wedding day to tell her that he finally understood what Kate told him outside the lawyer’s office after they signed their divorce papers. The episode ends, then, with that line: “Our marriage may be over, but our story is not.” We are thus greeted with a flash-forward montage of future happy moments between Kate and Toby, their kid Jack, and their respective loved ones (Toby gets remarried to a woman he meets in a coffee shop).

As for the courtship of Kate and Philip? It’s very This Is Us? We get a few glimpses of their courtship — a family dinner, an engagement party, a night of karaoke, the time Philip met Toby in a bar to awkwardly discuss their co-parenting arrangements. But the moment that defines their courtship comes on their first date when Kate — fresh from her divorce — asks Philip why a womanizing Brit who exclusively dates toothpick-sized women would want to date her, and she gives him guff for not having as much baggage as her.

I am going to transcribe his answer because it is just so much. This romantic monologue is delivered by a tearful Philip (played by the guy from You’re the Worst) outside of a Mexican restaurant:

It is extremely presumptuous of you to assume that I have avoided messiness and complication just because I don’t go around talking about my feelings all the time like the Americans do. More specifically, as you do. As you know, I was married once, too. She was beautiful in an imperfect way. Bit of a crooked nose, but it worked for her. And she was blind. We were happy for a really long time, but we had trouble conceiving. I thought it was just a sign that we weren’t meant to have children, but she was determined. We had three rounds of IVF. It consumed our time, drained our bank balance, and sucked all the lightness and laughter out of our home.

She said she wanted to try a fourth time, and I refused. She said I was giving up on our life together, and I said … I said, I no longer recognize our life together, so what was there to give up on? She, of course, then packed her bag to go to her mother’s and didn’t even say goodbye when the cab came to pick her up. She only made it five minutes down the road before she was hit by a drunk driver, killed instantly.

So, to answer your question: I am trying to be happy again. And you make me happy. So, that is what I am doing.

Wow! His blind, infertile wife left him and was killed by a drunk driver on her way to her mother’s house! Gilding the lily there, aren’t you, This Is Us? Just stuffed that monologue to the gills!

Next week is their wedding. In the meantime, this episode did feature a small shot of Kevin’s ex-wife, Sophie, who was at Kate’s engagement party. Alexandra Breckenridge is back in the fold, which almost certainly means that Kevin’s first wife will almost become his end goals. I expect they will reconnect at Kate’s wedding. That will hopefully be a less agonizing story to watch unfold than the season of divorce.