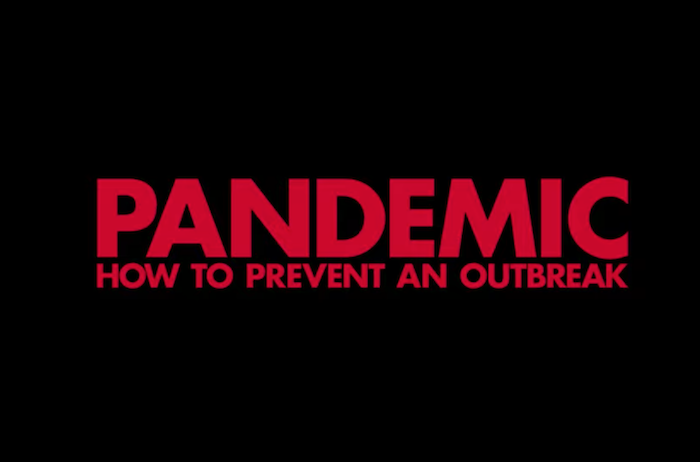 My mother is an epidemiologist, which is probably why the plague played a large role in my bedtime stories as a kid (at least I hope.) Global pandemics are something I grew up with and since my mom at one point worked for the CDC, I tend not to get freaked out by the newest virus strain that is making the fear-mongering media rounds. I mean, I wash my hands regularly, get my flu shot every year, and keep my licking of public doorknobs to a minimum—- so I’m doing everything that’s in my control to stay as healthy as possible. As to the things that are out of my control? Well, I grew up with someone whose job it was to fight the infectious spread of disease, so the mystery as to how you fight, or better yet, stop a global pandemic before it starts is not shrouded in mystery. It’s downright mundane.

Which brings me to Netflix’s new docuseries, Pandemic.

Now, sure, on the surface if you’re freaked out about the newest virus the media is telling you is going to kill you it seems like a terrible idea to watch a show entirely about global pandemics—but you know what this show does that is excellent? It shows the helpers—the researchers, doctors, veterinarians, and public health officials who work full-time and, in some cases, put their own health on the line, to study infectious disease, how they spread, and predict where the next ones will come from, primarily focusing on influenza, but some ebola is thrown in for good measure, too. God bless ‘em.

What the show demonstrates, but does not get spoken about in the media enough is that there are people working around the clock, tirelessly, fighting this stuff, and not just when things get bad. Some of them are going out to ponds and caves regularly to catch, test, and release animals that commonly spread the deadliest viruses to see if the population has the virus, and if so, if it’s mutated significantly. There are even people out there working on a global flu vaccination that would make you immune to all flu strains (yes, including the coronavirus) possibly for the rest of your life, which isn’t as farfetched (or far away) as one would think.

Of course, with the good, there is the bad, and they show the dumbest, selfish f*cks that humanity has to offer. I am talking about anti-vaxxers. These f*cking assholes. So, fun fact: back in the day, I was patient zero in a measles outbreak in Alaska. I was too young to get vaccinated, my parents took me with them on a trip (even in the ’80s people frowned on leaving your infant home, alone, for weeks on end,) I got infected with the measles and spread it once I was back in Alaska. Luckily, I had no complications and no one died in the outbreak, but that shit is dangerous for a baby—if it had killed me, who would tell you about mole people?? My measles used to be a fun talking point I’d bring up to make myself seem uNiQuE because measles were eradicated in the US. Not anymore, thanks to these f*cks who think they know more than their doctors, which they proudly announce on camera. Pandemic isn’t here to listen to stupid, selfish assholes who think their gut feeling is equally if not more valid than numerous scientific studies. Their scenes are interspersed with public health officials planning for the inevitable outbreaks due to their selfish stupidity, people dying of the flu, and nurses who assist migrants detained by ICE, fighting tooth and nail to get everyone vaccinated amongst supply shortages. It’s cathartic to see their stupidity treat as much but also infuriating. Especially when these dummies lament that their kids aren’t allowed to be around their friends, or participate in activities due to discrimination. Yes, these Darwin award nominees actually think their choice to put all of us at risk for preventable diseases, and us saying “stay the f*ck home” is discriminatory. F*cking idiots.

The larger point is, Pandemic clearly explains how viruses jump from animals to humans, how they’re spread amongst us, how we fight them, how we treat them, and the numerous protocols that go into place once we reach a pandemic-level threat. As the show likes to remind us—it’s a matter of when for the next global-threat pandemic, but that’s not to say that there aren’t a lot of people actively working to mitigate it’s effects, now.

So if you’re a bit freaked out about the coronavirus, I fully recommend watching Pandemic. As Mr. Rogers says, “look for the helpers” and Pandemic will show you, there’s helpers out there, actively working to make sure you’ll be OK, now.

…but also? Wash your hands regularly and get a flu shot if you’re able to. It’s not just about your health, it’s about keeping everyone else who comes into contact with you healthy, too. Especially the immunocompromised and babies among us who are unable to get vaccinated.

← Why Are Pamela Anderson and Jon Peters Getting Un-Married? | Box Office Report: 'Bad Boys For Life' Holds on Strong as 'Gretel and Hansel' and 'The Rhythm Section' Flop →