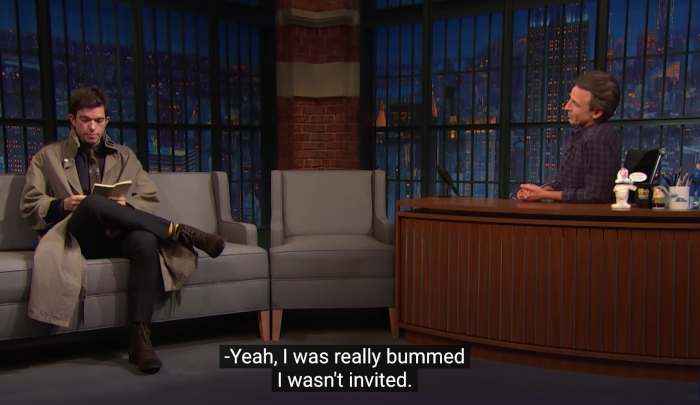 Hey y’all! It’s still election day. And there’s still not much happening, which is to say: You could spend the next 15 minutes idly strolling through your social media feeds and learning absolutely nothing of value while probably increasing your blood pressure, or you could watch this segment from last night’s Late Night with Seth Meyers where John Mulaney asks Seth Meyers a bunch of questions.

The segment didn’t make it onto the show for reasons that are fairly obvious, but it is nevertheless wildly delightful. It’s a great way to kill 15 minutes because I know you’re not actually going to try and watch that movie you’ve been meaning to watch forever today. We both know you won’t be giving it the attention it deserves.

Anyway, watch it, and let’s discuss it afterward.

As soon as we ended this interview @shoemakermike walked on stage and said "We can't air this." I am so happy the bulk of it lives online. And thank you @sethmeyers for planning my eulogy. https://t.co/4oyJ7Kor8A

Great, right? I particularly like the part where Meyers muses about Colin Jost just asking out a host of SNL — Scarlett Johansson — and eventually marrying her. In that segment, Mulaney also asks Meyers if he enjoyed the wedding, which was last week, and Meyers said he did, and then Mulaney says he was bummed he wasn’t invited, and then they moved on to the next topic.

I mean, it’s no big deal or anything. There’s a pandemic going on, and they only invited their closest friends and family, which included Seth Meyers … but not John Mulaney? And before you check, yes: All four of Mulaney’s years as a writer on SNL crossed over with Colin Jost’s time as a writer on the show (he’s been there since 2005). In fact, Jost became head writer on SNL the year that Mulaney left in 2012. Also, Mulaney and Jost write all those musical sketches together, like “Diner Lobster.”

Obviously, that doesn’t necessarily make them “close friends,” and I’m sure that Jost had the limit the number of SNL friends he had at his “intimate” wedding, but they got married in New York, Mulaney was in New York hosting SNL, so I would have just assumed that’d he’d have been invited, because they are at the very least close enough that Mulaney could express being “bummed” about not being invited, as though maybe he expected an invitation? Weird, huh?

Anyway, this has been “Random Musings on Election Day” by Pajiba writer, Dustin Rowles.