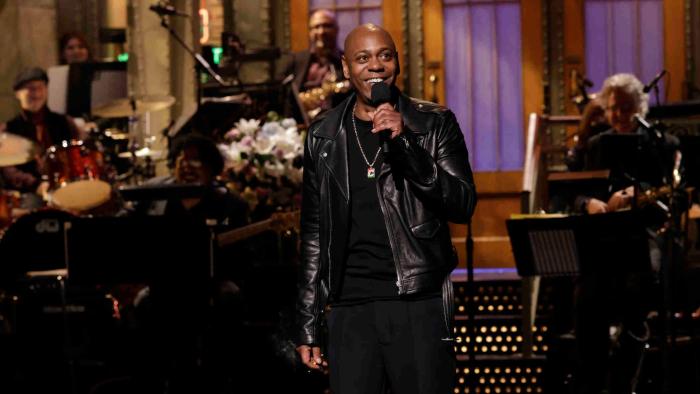 'Why Is Everyone Fine with Making Fun of Jews?'

A couple of years ago while my son was in the hospital being treated for cancer, I asked him if he’d like to help me score the SNL sketches in an effort to make him feel better. I stopped watching the show live and started watching it in the morning with my older kid. A couple years later, my ten-year-olds — who are probably (definitely) too young to be watching SNL — insisted on tuning in when Lizzo hosted. Now they usually watch a few sketches before they get bored and wander away, except H who usually comes back to complain that Che and Jost are “too mean.”

All three kids were in the room for Chappelle’s monologue this weekend, and they were already wary when Chappelle took the stage because the only thing they knew about him is that he is transphobic. What they didn’t expect to watch during a deeply uncomfortable 15-minute monologue was a stand-up act so clearly antisemitic that even my ten-year-olds not only understood what was going on but felt attacked.

I’m not going to rehash the entire monologue, but the short version is this: Chappelle opened the monologue with a fake apology that he thought Kanye West should read to basically “get the Jews off his back,” and then proceeded to make fun of Kanye, not for his beliefs but for saying them out loud. He did not denounce Kanye’s antisemitism. He did not denounce Kyrie Irving’s bigotry. He basically said that Black people weren’t responsible for the Holocaust, white people are, so it’s OK for Black people to be antisemitic because Jewish people have more power — they run Hollywood — than Black people, who don’t even run Ferguson, Missouri.

Chappelle also suggested that Jews — who run Hollywood — should stop canceling Black people for antisemitism, and that if anything happens to Chappelle’s career, we know who to blame (Jews). Also, Black people should be careful about expressing their antisemitic beliefs in public because Jews are always watching — again, they control Hollywood — but also that it’s OK to stereotype about Jews because there are stereotypes about other minority groups and why shouldn’t Jews be stereotyped, too?

I’m not going to get into everything that is wrong with Chappelle’s monologue — people who read this site don’t need a lesson in Jewish history, stereotypes, or conspiracy theories — but I was dismayed that the monologue did not elicit immediate pushback. Entertainment Weekly made no mention of it in their recap, and only just addressed it half an hour ago in a separate article. Twitter’s response was effusive enough early yesterday morning that I initially thought I was blowing it out of proportion (I do want to thank amurderofcrows, the commenter who came in and highlighted the antisemitism so I didn’t feel like I was taking crazy pills).

But that’s the thing, isn’t it? In the last 24 hours, a number of folks have criticized Chappelle for contributing to the mainstreaming of antisemitism, and by not taking issue with the monologue, that’s exactly what the media has done: Allow Chappelle to suggest jokes based in bigotry and conspiracy about Jews are OK. “Oh, that’s just Dave being Dave! He’s friends with Jon Stewart! What’s the harm in a few Jewish jokes?”

It reminds me of a sketch on Inside Amy Schumer a few weeks ago set during an HR meeting with employees. The HR manager in the situation instructed employees on sexual harassment, offensive language, inappropriate touching, etc., but when it came to jokes at the expense of Jewish people? It doesn’t even register.


This is what it felt like the morning after Chappelle gave his monologue. To quote Schumer, “Why is everyone fine with making fun of Jews?”