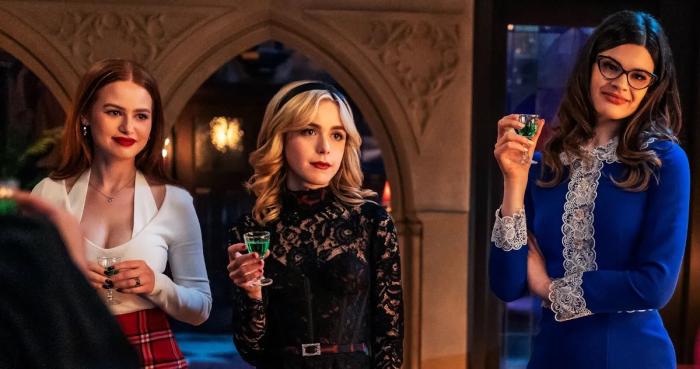 Where Things Stand on 'Riverdale' with Two Episodes Remaining This Season

Even for Riverdale, things are nuts as the series heads toward the final two episodes of the season. Let me just back up a bit, first: A couple of episodes ago, the season’s big bad, Percival Perkins, cast a spell on the town of Riverdale that killed off all the firstborns, which included Jughead, Archie, Toni, and Fangs. In last week’s episode, the surviving members put the dead firstborns on ice — literally — and brought in Sabrina, Kiernan Shipka’s character from the Chilling Adventures of Sabrina, to resurrect them.

Sabrina surmised that all the firstborns were in the Sweet Hereafter — heaven — and she sent Cheryl, Veronica, and Tabitha into the Sweet Hereafter to retrieve them (Sabrina’s dead ex from Chilling Adventures, Nick Scratch, also returned briefly from the Sweet Hereafter in Jughead’s body and went on a date with Sabrina). They managed to pull them out of the Sweet Hereafter, but Cheryl also brought along others: Her dead brother, Jason, and his wife, Polly, who is Betty’s sister. Polly and Jason are married and have kids in heaven, and they were all brought back and live in Cheryl’s house.

That brings us to this week’s episode, which dumped a lot of revelations on us. Let’s try and break them down into easy-to-digest bullet points:

— Jughead realizes that his mind-reading powers also allow him to open up portals into other dimensions, so he and Tabitha jump into the Rivervale dimension (the pocket universe explored in the first six episodes). In Rivervale, there are two Juggheads, one who sits in a basement and keeps his universe alive by writing about it and another who struck a deal with the literal devil — a guy who goes by the name Mr. Cypher — to become a hugely successful comic-book writer. The catch? All of his comics have to be dark and devastating.

— It turns out that the explosion at the beginning of the season allowed Rivervale to bleed into Riverdale. Now, the stories that Jughead in Rivervale writes become true stories in Riverdale. He’s basically dictating the events in Riverdale. He gave his comic-book character versions of his friends’ superpowers, and those superpowers became real for the Riverdale versions of his friends. The problem is: In the comic books that Rivervale Jughead writes, Percival Perkins wins the all-out war with Riverdale.

— Ethel Muggs, who is played by Shannon Purser, who also starred as Barb in Stranger Things, is alive and a hardass in the Rivervale dimension, which is nonsensical and confusing.

— We also learned Percival’s origin story. He arrived in 1580, got involved in witchcraft, and was set to be executed. However, Percival also struck a deal with the devil, who spared his life and gave him immortality in exchange for his soul. Percival was in Rivervale, and after the explosion in Archie’s house, he seeped into Riverdale, where he decided to amass his power and take over the town. His powers grow stronger as Bailey’s Comet gets closer, and there is also some ghost train that has something to do with his nefarious plans to take over the town and control all of its citizens.

— While in Rivervale, Jughead and Tabitha met with the devil in the bathroom after he played a game of chess with an angel to decide whether good or bad wins (the devil won). This is when the devil first learns that Percival has relocated into another dimension, and he’s annoyed because the devil believes Percival is trying to outrun him so he won’t have to give up his soul. The devil also told them that the location of Pop’s was where Percival was set to be executed in 1580, and it is therefore now the site of a “hell mouth,” whatever that means.

— As part of Percival’s plans to take over Riverdale, he decides to execute Reggie and Kevin, who are locked in a safe. However, Jughead jumps through some interdimensional portals and saves Kevin and Reggie, while Archie blows up the ghost train’s railroad track (I am not making any of this up).

— However, Percival gets his revenge by executing Betty’s mom, Kevin’s Dad, and Archie’s Uncle, which is weird because all three were allies of Percival.

The war has started!

← Look: Quinta Brunson Gets In On the Weird Al Yancovik Biopic Fun As Oprah Winfrey | What We Talk About When We Talk About Birth Control And Population Collapse →