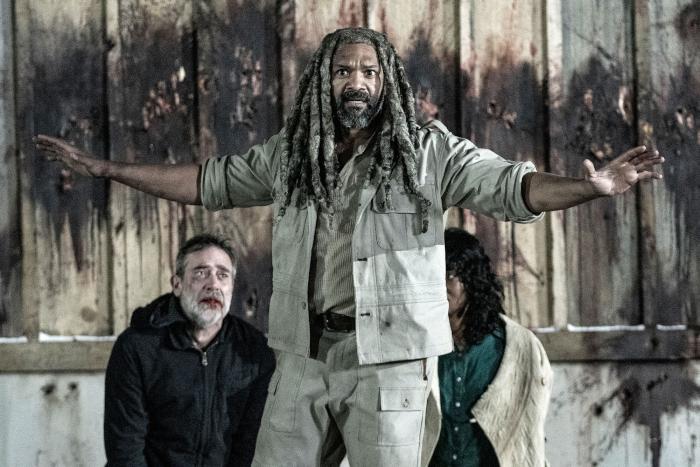 Where 'The Walking Dead' Stands with Two Episodes Remaining

There was a sequence in last night’s episode of The Walking Dead where Negan took the blame for an attempted insurrection and was about to be executed by Commonwealth soldiers. It might have been a decent ending for a character who once murdered scores of people. Old-school The Walking Dead might have even pulled the trigger.

Alas, Negan — like so many characters during this final season — is saved by Ezekiel, as well as three layers of plot armor. We knew he wouldn’t die because his spin-off has been announced, which completely robbed the sequence of its tension. No one is more baffled by that than Jeffrey Dean Morgan.

There are two episodes remaining in the endless 24-episode final season. No one important died this week. It’s been a long time since a character that viewers care about was killed off, and maybe that’s because viewers don’t care about many of the characters anymore. It looked like they might kill off Eugene this week. He was tried for the murder of Governor Milton’s son, Sebastian. Yumiko acted as his lawyer. It was a sham trial, and Eugene gave a big speech to try and save himself. The judge found Eugene guilty anyway. If they’d executed him, Eugene might have been remembered fondly. The death of his character would have provoked an uprising. It isn’t his death, however, that convinces Mercer — the leader of the Commonwealth army — to flip sides and save Eugene. It’s Eugene’s warmed-over speech.

“In my own little way, I changed the world. And I learned that one person can do that. And sometimes, all it takes is one person to do that,” Eugene says in what’s meant to be a rousing speech that lands like wet cheese smacking a concrete floor.

“Let’s f**k shit up,” Mercer says to Eugene afterward, as Eugene is being led to his death. (The line was ad-libbed by Michael James Shaw, and I think we’re supposed to be impressed that he came up with the line, “Let’s fuck sh*t up.” The point is that Mercer is ready to go to war against Governor Milton and the Commonwealth, which has been the entire point of this season. It took 22 episodes to get here, but everyone is finally coming together to go after the most anti-climactic Final Boss in television history. Pamela Milton: A mostly bad person who only recently stumbled into pure evil! I’m not sure what the proper analogy is for this, but I think it’s like getting one of those presents wrapped in a box within a box within a box, and after you open 22 boxes to get the actual gift at the bottom, it’s a $25 gift card to Applebees.

For those keeping score: Daryl, Carol, Maggie, and Rosita have now joined forces with Ezekiel, Negan, and Princess, among others. Aaron and Jerry reunited with Luke (there’s Dan Fogler!) and his girlfriend, who are all that remain of Oceanside. Eugene, Stephanie, and Yumiko are with Mercer back in The Commonwealth. Presumably, all of these characters will converge to take on The Commonwealth military, and then The Walking Dead can finally end (except for the three new spin-offs that have been announced, so far, plus the two existing spin-offs).

At this point, I don’t know how many people watch The Walking Dead on AMC+ and how many watch it on cable, but next week, AMC+ subscribers will be able to watch the season finale. The people who write about The Walking Dead will have to pretend that isn’t happening, just like we have to pretend that there’s still an episode left of the first season of Interview with a Vampire. I understand why AMC+ originally offered episodes in advance, but the model no longer works. It’s confusing and makes it difficult to write about AMC series, many of which — like Interview, Dark Winds, and the forthcoming second season of Gangs of London are very good.