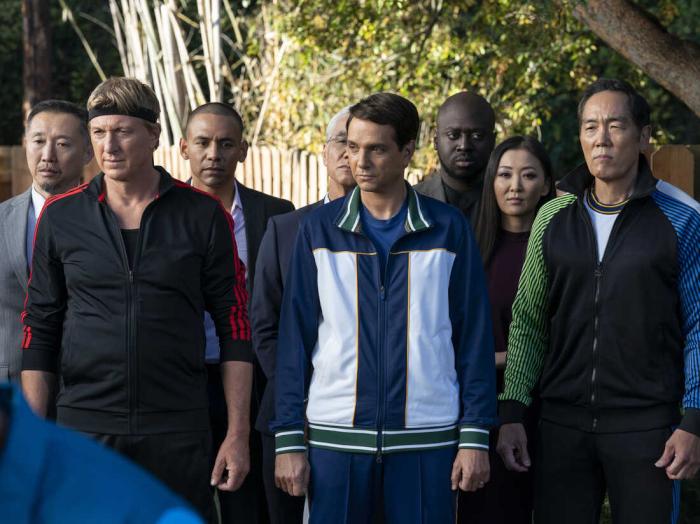 Where Does 'Cobra Kai' Go From Here?

Netflix recently released the fifth season of Cobra Kai, and while it hasn’t officially picked up the series for a sixth go-around, it’s hard to imagine even Netflix would put the kibosh on a series as popular and, presumably, as inexpensive as the Karate Kid sequel series.

Where could it possibly go in its sixth season? I ask because I’m always skeptical that the series will be able to maintain the magic after each successive season, though every year I am left pleasantly surprised by creators Josh Heald, Jon Hurwitz, and Hayden Schlossberg’s ability to stay true to the spirit of the original film while mixing and matching the old and the new. It’s all the more impressive that it’s managed to do so without ending each season in a big competitive showdown.

Much of the success of Cobra Kai has been the ability of its main characters to maintain their underdog status even after victories, a lesson it has probably picked up from the likes of Friday Night Lights, which doled out the bitter and the sweet in equal measure. In Cobra Kai, Johnny — the bully of the original film — gains the underdog status against a likable favorite, Daniel LaRusso’s Miyagi-inspired dojo. Cobra Kai and Miyagi-Do trade both underdog status and a number of characters the next season before Johnny has to turn on Cobra Kai himself after John Kreese takes it over. It also helps that Johnny’s son, Robby, is a lost soul we root for even when he’s at his worst, and even when he’s pitted against perpetual good guy Miguel.

Cobra Kai has also managed to maintain its tension by continuing to pit Johnny and Daniel against each other even when their interests aligned. That changed in the fifth season when they finally met a match too great for either to go at it alone in Terry Silver. Over the course of the season, Daniel and Johnny grow closer, rooted in both a shared history and a shared enemy. Once Robby and Miguel finally befriend one another and the one major holdout, Tory, joins the Miyagi-Fang fold and vanquishes Silver (with the assistance of sometimes antagonist, sometimes comic relief Raymond (Paul Walter Hauser)), it’s hard to imagine there’s any room left for the series to go. Silver is defeated, Kreese — after escaping from prison — is a fugitive, and everyone else is now friends, or at least friendly.

What’s left? The creators suggest that a sixth season will go global, which makes sense. The existing Cobra Kai is cooked, there’s little left to prove in San Fernando Valley, and the end of the fifth season sets up an international competition for the sixth season. It’s hard to imagine that happening without Cobra Kai — the show’s namesake — so I expect that Kreese will evade authorities and set up shop internationally. That almost certainly means setting up new antagonists and new obstacles, but presumably, it will also need to shed some characters. The cast is wildly overstuffed at the moment, which has meant old favorites — like Hawk and Demetri — have seen increasingly less screentime as the series centers on its core six: Daniel, Johnny, Robby, Miguel, Tori, and Samantha.

The problem with going global, however, is that it takes away from the intimacy of the characters’ home lives: If Johnny and Daniel take their show to Asia or Russia, where does that leave Johnny’s now pregnant girlfriend and his shabby Reseda apartment? Daniel’s marriage and car dealership? Does Chozen — a welcome addition from the past — continue tagging along? If the characters within Miyagi-Fang lose their shades of grey as they face an unambiguously evil international Cobra Kai, will the magic finally disappear? Or will they finally bring in the one franchise character they haven’t yet managed to lure to the series: Hillary Swank’s Julie Pierce from The Next Karate Kid?

It’s tough to say, but I’ve also counted out each successive season of Cobra Kai and Heald, Hurwitz, and Schlossberg have yet to disappoint. If the Fast and the Furious can keep its growing family together after ten movies and numerous international locations, I suppose there’s no reason that Cobra Kai can’t do the same.

← Review: Crowd-Pleasing 'The Woman King' Revitalizes the Old-School Historical Epic | After a Royal 'House of the Dragon' Wedding, a Bushel of Oranges Seems Rather Tempting →