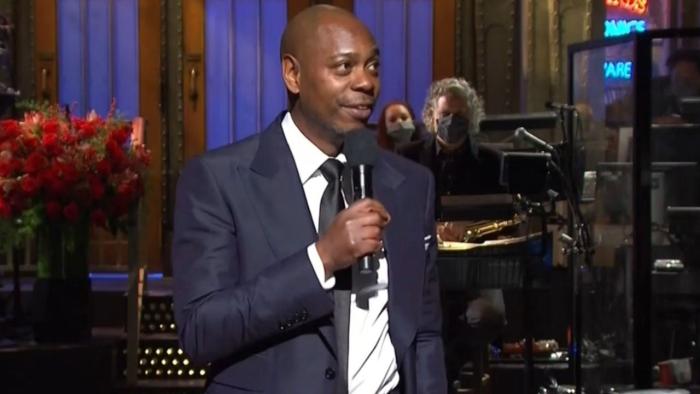 Dave Chappelle Sort Of Hosts 'SNL,' While The Foo Fighters Blow the Roof Off the Joint

Cold Open — Listen, Joe Biden was declared the victor of the Presidential race today, so I am going to take it easy on the cold open and just say that Maya’s Kamala Harris was great, and also that I’m sure Alec Baldwin is as excited about never doing another Trump impression as we are in not seeing him ever do another Trump impression. Also, Jim Carrey brings back the Ace Ventura “Loser.” I’m not proud of how much I enjoyed that. (Score: 5.5 out of 10)

I think we can also assume, based on the placard he held up at the sign-off, that Baldwin is done with Trump? Weird way to announce it, but it’s also very Alec Baldwin. Thanks, I guess?

alec baldwin holding up a “you’re welcome” sign during the end of snl is my joker origin story i swear to god pic.twitter.com/htUqjJ81rD

Dave Chappelle Monologue — Chappelle gives a long, 16 minute monologue. Some of it works; some of it does not (AIDS jokes in 2020? The crack about women deserving to make less money?). He also sums up the current moment by saying that we need to find a way to find joy in our lives and to also forgive. This space right here is probably not the place to get into this debate about Trump and forgiveness, so I’ll leave it at that. As a monologue, however, it was hit-and-very-miss. (I should note, too, that because of a college football game, SNL started an hour late last night, and I was beat, so I watched this a second time this morning and raised the score half a point, but it’s still not great and feels out of sync with this moment). (Score: 5.5 out of 10)

Aunt Jemima and Uncle Ben — Aunt Jemima and Uncle Ben don’t understand why they’re being fired, “All-State Guy” doesn’t understand why he’s being lumped in with them, and Pete Davidson’s lips are big. This skit goes off the rails, but not in an entirely bad way. Chapelle’s Dennis Haysbert voice is hilarious, and no one in this skit can keep it together. It’s goofy, trainwreck good. (Score: 6 out of 10)

Mario Memories — Two guys try to talk about their favorite memories of Mario, the video game, but they get sidetracked by a story about one of them losing his testicles in a traumatic, painful way. It’s definitely a Kyle Mooney sketch, and it definitely goes on too long, but for some reason, Kenan transcends, and I lost it every time he had to react to the nut-popping story. Oh, and Mat: This is definitely the skit for you. (Score: 6 out of 10)

Weekend Update — Jost and Che really enjoyed tonight’s “Update,” and it’s genuinely fun to bask in their joy. And look: I didn’t like how they handled the 2016 election, and I wasn’t thrilled that — of all the people — they were the anchors during the Trump era, but in the end, they came around. Maybe it’s the Biden/Harris high talking, but the thing about “Update” this year is that it’s been the best part of the show, which is to say: It’s just like old times at SNL. Kate McKinnon also comes on to lay out Trump’s legal strategy. (Score: 8 out of 10)

NewsCenter 5 Albany — A news anchor tries to get two co-workers to describe a harrowing hail storm, but all they can talk about is how they fell in love during the storm. It’s a real bad skit. (Watch Here) (Score: 3 out of 10)

DC Morning — Another news program, though this one is about the election, specifically Trump abandoning the White House and going on the run. They use footage from the OJ Simpson Bronco chase. There’s nothing to this skit, but at least it features Chappelle, who only appears in two sketches the entire tonight. I feel like they just brought him in to give the monologue, but the monologue wasn’t that great, and it ran long, so there were also fewer skits. Maybe they should have had someone better suited to this moment to host. Someone who could have celebrated the moment with us, or had it gone the other way, expressed anger with us. Someone like, I don’t know: Leslie Jones. (Watch Here) (Score: 3 out of 10)

Foo Fighters — The Foo break out a new rendition of “Times Like These,” and I don’t know if it’s specifically meant to apply to this weekend’s events, but it sure feels suited to it. Also, I fucking love The Foo. This version of the song, too, is a lot like the election: They make you wait a long time for the climax, but when it comes, it’s totally worth it.

Also, how did SNL NOT do a Steve Kornaki skit this week? Mikey Day was right there.


← The Presidential Race Has Been Called for Joe Biden | The Sights And Sounds in America On November 7th, 2020 →