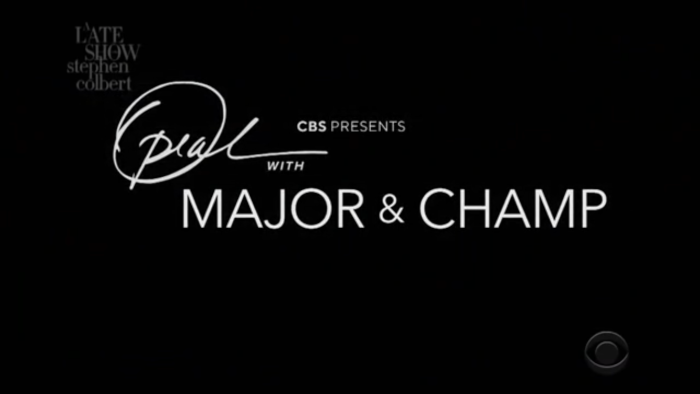 We’re All Talking About The Wrong Oprah Interview

Unless you’ve disconnected from all social media (which, if you have, go ahead and live your best life) you have probably been made aware that Oprah recently sat down to interview Harry and Meghan. There were bombshell revelations, accusations, and some eyebrow raising. The interview was so anticipated that it drew 17 million viewers which, in today’s television landscape, is inSANE. However, it is still not the most important interview Oprah has conducted recently. Just ask Stephen Colbert!

On the newest episode of A Late Show with Stephen Colbert, the crew opened with a short sketch. The sketch involves Oprah interviewing Major and Champ Biden, the president’s “controversial” dogs. Major and Champ were removed from the White House recently after an “aggressive incident” and the segment hinges on that, but if you’re expecting a serious take (though I don’t know why you would be) look elsewhere.

This segment is pure silliness, with the dogs answering strictly in barks. I gotta tell ya, I chuckled for pretty much the entire thing. It’s short but effective, although I’m an easy target when it comes to comedy based on people somehow understanding barks or growls or clucks.

So thank you, Stephen Colbert, for opening everyone’s eyes to the real issues. Major and Champ are good, good boys and deserve to be heard. Such good boys!