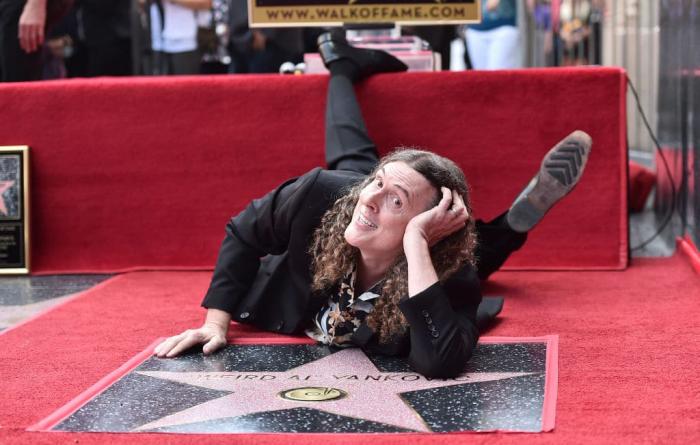 When I was young, I had a friend who loved two things: LEGO and “Weird Al” Yankovic. We spent a lot of our time together building weird space bases and listening to “Weird Al” songs. He often had to explain them to me because I was all about Top 40 back then. If you were a pre-teen in the mid-’80s, you were a real dork if you went to Tower Records and left with a “Weird Al” cassette. He was the quintessential, awkward white dude. He played the accordion. Who plays the accordion? Scratch that. Who can build a Grammy and platinum award-winning music career playing the accordion? This guy:

He got his start on the Dr. Demento comedy radio show and he released his first single, “I Love Rocky Road,” back in 1982. Since then, “Weird Al” has racked up 10 gold records, 5 platinum and 1 double platinum album, and 5 Grammy wins — all on the strength of clever parody and sick accordion skills. It’s been a badge of honor for many musicians to get the call from “Weird Al” asking if he can use one of their songs (unless you’re Coolio, who didn’t appreciate Al’s take on his hit, “Gangsta’s Paradise”).

Yankovic has also made a nice voice-over career for himself, appearing in animated shows like Adventure Time, Robot Chicken, and Teen Titans Go! He’s also been featured in plenty of live-action projects, most notably he’s the star of the 1989 cult-classic UHF.

All of this is to say that “Weird Al” is the unexpected rock star we all love in our own dorky ways. He’s been consistently laying down people-pleasing music for three four decades and deserves some laurels thrown at his feet. A few years back, Funny Or Die created a fake trailer for a fake “Weird Al” Yankovic biopic that starred Aaron Paul. Now Funny Or Die, founded by Adam McKay and Will Ferrell (RIP that relationship), is producing a full-length biopic starring Daniel Radcliffe as the man himself. The catch? It will stream exclusively on The Roku Channel, so only about six people will ever see it. This is a shame because Dan Radcliffe has proven himself as a standout among stars his age — willing to take risks and acquit himself very well even with the most questionable material, all without being some sort of insufferable ass (ahem, Jared Leto.) Did I expect to like Swiss Army Man based on the synopsis? No, no I did not. Did I enjoy it mostly because of Dan Rad’s “performance?” Yes, I did. If you haven’t been watching him on TBS’s Miracle Workers, you’re missing out. I believe this will be a quirky, good fit for him. Al agrees.

“When my last movie UHF came out in 1989, I made a solemn vow to my fans that I would release a major motion picture every 33 years, like clockwork. I’m very happy to say we’re on schedule. And I am absolutely thrilled that Daniel Radcliffe will be portraying me in the film,” said Yankovic. “I have no doubt whatsoever that this is the role future generations will remember him for.”

Here’s the Funny Or Die video from 2013. Let’s just pretend this is a preview for now, shall we?


← Netflix Hates You and Hates Teenagers, So They Made A Sequel to 'Tall Girl' | The Expanse's Final Series Is About Ethics in the Face of Mass Suffering →