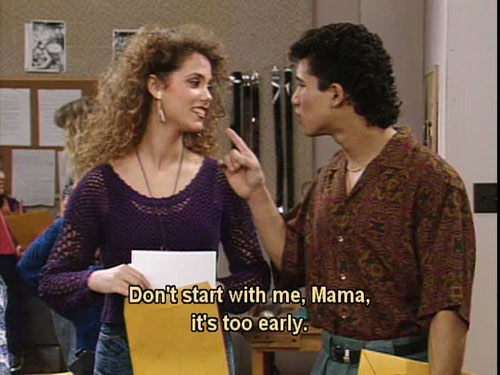 It is bizarre to me that, in 2019, as the streaming wars heat up between the various studio-backed platforms, the lynchpins in this competition are two shows from the ’90s (Friends and Seinfeld) and one show from the aughts, The Office. People are going to make subscription determinations based on shows that are 15-25 years old, because of reruns.

NBCUniversal and their new streaming service, Peacock, is going to get The Office, as well as Parks and Recreation, but as Kayleigh told you, they are also reviving Battlestar Galactica, Punky Brewster and Saved by the Bell.

What she didn’t mention, however, was the premise for the Saved by the Bell revival. Let’s put aside the fact that Mario Lopez is returning (although, Mario Lopez is a transphobic trash person), and just focus on the premise. From Vulture:

Per a press release confirming the revival, which has been rumored for more than a year, the new show imagines a world where Zack is now governor of California (no, really), but he’s in political trouble for “closing too many low-income high schools.” To fix his political problem, Governor Morris decides to “send the affected students to the highest-performing schools in the state — including Bayside High. The influx of new students gives the overprivileged Bayside kids a much-needed and hilarious dose of reality.”

Ummm. So, it’s Saved by the Poor Kids: The Series? The low-income students are going to give the rich white kids a “hilarious dose of reality”? In other words, they’re props? And Zack f**king Morris is the goddamn governor? It took them a year to come up with this premise? What a sh*tty, condescending idea for a television show.

And of course, the white guy who stopped time so he could talk to the camera is The Governor. Maybe he should stop time and rethink that premise. I look forward to seven seasons of poor kids spoonfeeding lessons to overprivileged rich kids. What a “hilarious dose of reality.” I think TK said it best when he said in Slack, “[grinds teeth to dust]”

← Did Jennifer Lawrence and Cooke Maroney Get Married at New York City Hall? | Warner Bros. Releases A New Poster For 'Birds of Prey' And It Is PERFECT →