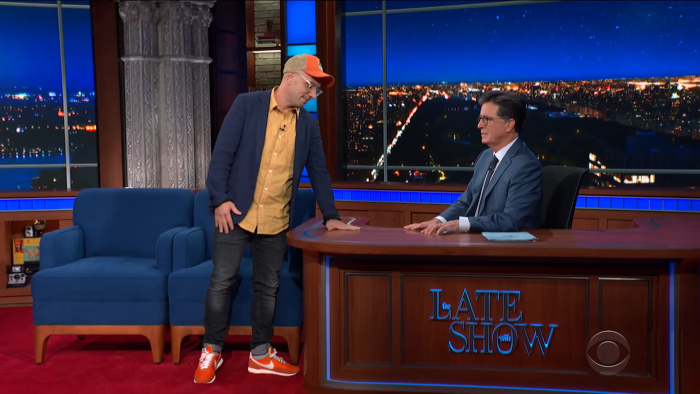 If you’re like me, you openly wept while watching the viral video of Steve from Blue’s Clues telling you that you were still his friend. The video, created for the 25th anniversary of the show, is a wonderful hit of positivity. It’s not even just that it was a childhood icon that delivered the message. You could have almost anybody say the exact same things Steve says, with the same sincerity, and I would be a puddle of mush. I know I’m not the only one, as evidenced by the newest episode of The Late Show with Stephen Colbert.

First, we get Stephen watching the video in question. Sure, it’s a bit. He’s playing the situation for laughs but dagnabbit, the man seems genuinely touched. His reaction also speaks to my point. It’s a sweet, kind, loving video. Anyone with a pulse, whether they know Blue’s Clues or not, should have the same reaction. Maybe I’m exaggerating. Perhaps I just assume that everyone wants a little positivity injected into their lives, as it happens so rarely these days. Either way, I stand by it.

Next, the big reveal. Steve is actually in the studio! He arrives to offer Colbert a hug, and oh man, there is some good huggin’ that follows. I’m a hugger if the other person wants one. I’ve got long arms due to possibly having Marfan Syndrome, so I’m perfect for it. It’s one of the things I’ve missed most of all during the pandemic. Sure, I can hug my wife and children, but that’s expected. Hugging a dear or new friend is a different kind of special. Steve and Stephen embraced that specialness when they embraced each other.

It’s Friday. Start your weekend off with this hit of sweetness. Pass it along to someone else. Hug somebody close to you. You look great and I’m proud of all that you’ve done.