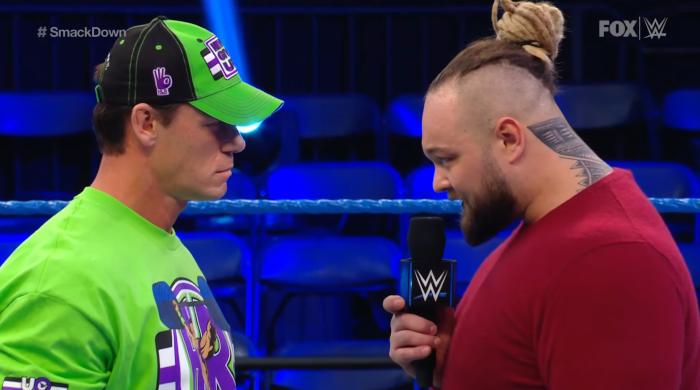 Watching The WWE With No Audience Is... Surprisingly Entertaining?

With life full of disruptions at the moment due to COVID-19, television, naturally, is no different. Scripted shows in production have largely shut down, and those that normally film in front of a live audience have tried to find ways to adapt, which is how we get weird things like Stephen Colbert performing his monologue from his bathtub.

The WWE has adapted as well, moving their traveling shows off the road to their training complex in Orlando, Florida, and filming without an audience, which means their shows have become very, very weird in a way that… I kind of can’t stop watching.

Before we get into some of the footage: I used to watch wrestling when I was younger, off and on through the late-’90s “attitude” era. My viewing has definitely fallen off since, except for the occasional clip here and there.

While my fandom and viewership waned, one thing about professional wrestling that’s always impressed me is the sheer level of difficulty in providing an entertaining, compelling performance for the crowd and the cameras. The best wrestlers combine punishing stunts, character work, and an ability to improvise in a single, glistening package, and without the crowd, that commitment and work is even more impressive and surreal.

Let’s start with this Edge promo from this Monday’s Raw, where he challenges Randy Orton to a match at the (still scheduled) Wrestlemania:

The emptiness of the room and the lack of a crowd to react to/feed off means that our focus is entirely on Edge and his performance, which, already intense, feels weirdly ominous and compelling in a way that I’m not sure I’d appreciate normally.

The lack of an audience also makes the absurd parts even more, well, absurd. Like in this showdown between John Cena and Bray Wyatt on last week’s SmackDown:

If you watched that (and I hope you did, at least a little bit), there’s a lot to unpack:

At 2:06, I love how, as Bray Wyatt comes out of the crowd, John Cena and Michael Cole stick doggedly to the script, and look around, confused, as if they can’t find him.

At 2:28, I confess I don’t know anything about Bray Wyatt beyond what I’ve read in the past few minutes, but this persona is very weird, and the lack of an audience enhances that.

At 4:05, Bray Wyatt gets to the portion of his promo that was so weird and creepy that I’m just going to embed the video here again, starting from that point:

Seriously, am I the only one being strangely drawn in by all of this? Don’t get me wrong, the live audience remains a crucial part of the full experience, but these performances feel like they’re being heightened by the empty void.

That said, when you get to matches, that’s where the lack of audience really makes a difference, as wrestling gets pretty strange when you can clearly hear everyone, including the referee:

“It’s two, what do you want me to do? It’s two!” Oh, never change, nameless ref who we can now hear way too clearly.

How much longer the WWE can (or should) keep this up is anyone’s guess: as of now Wrestlemania is still scheduled for April 4th and 5th, to be performed without an audience. Although as we’ve seen, things can change in a very short period of time. For now, the bizarre spectacle of empty arena wrestling is making some otherwise ordinary wrestling moments into memorable ones.

One last example: Stone Cold Steve Austin sticking to his call-and-response script (with a shot to the empty seats) captures the absurdity perfectly:

← There Was No Good Reason for Brandon Routh's Departure From 'Legends of Tomorrow' | Former Meghan Markle Co-Star Says He Was Offered $70,000 To Lie About A Relationship With Her →