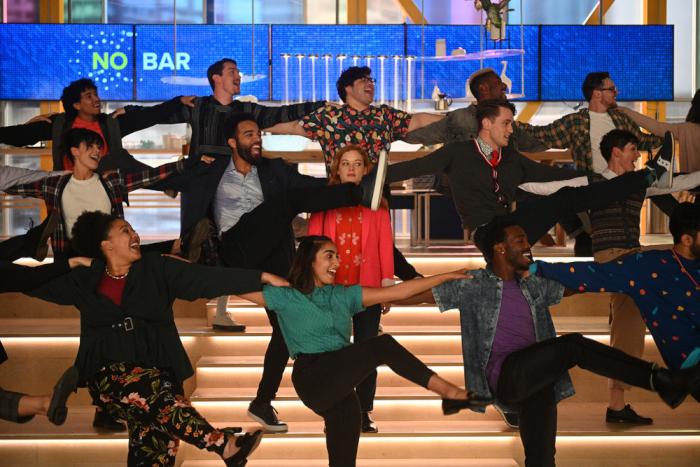 As January gets underway and TV shows that aren’t focused on mask-wearing storylines are premiering, it’s come to my attention that watching actors interact in group settings, especially knowing they filmed these scenes months ago while in the midst of the pandemic, is giving me anxiety.

While most recently watching the Season 2 premiere of Zoey’s Extraordinary Playlist, the first big musical sequence involved a group of Zoey’s co-workers singing and dancing around her. They were very, very close to her face, circling her, and generally being all up in her personal space. They were also unmasked because this show is completely ignoring the year 2020 (as it should). Of course, I don’t want to watch my favorite characters talking to each other like they have been on Grey’s Anatomy or This is Us or anything. Six feet apart just won’t do because I want that fantasy right now.

But damn it if watching that scene didn’t make me slightly uncomfortable. I was so tempted to shout, “Stop what you’re doing and get away from each other right now!” I was terribly weirded out about watching a group of people being so physically near each other despite knowing that what I was watching was only fiction. In real life, the actors were being tested at least 3 times a week, which is way more than the rest of us have probably been tested. They were also filming in Canada, where the Covid numbers are still bad but not as bad as they are in the U.S. And still it was the most bizarre TV watching experience in a long while.

I’ve seen a couple of episodes from other upcoming shows that also filmed in the months during the pandemic (and still are because we’re far from over this) and it was also hard to shake the strange feeling of watching people interact sans masks and social distancing. After months of being stuck at home without group interactions and Zoom calls replacing happy hours and get-togethers, watching people breathe in each other’s faces was pretty disgusting and anxiety-inducing. It might be a while before I’m completely comfortable watching others speaking in such close proximity without being paranoid that they’re going to contract the virus.

← Review: 'Herself' Is A Balm For Your Ragged, Aching Soul | 5 Shows After Dark: 'All Creatures Great and Small' Premiere PBS, 'Tiger' Premiere HBO →