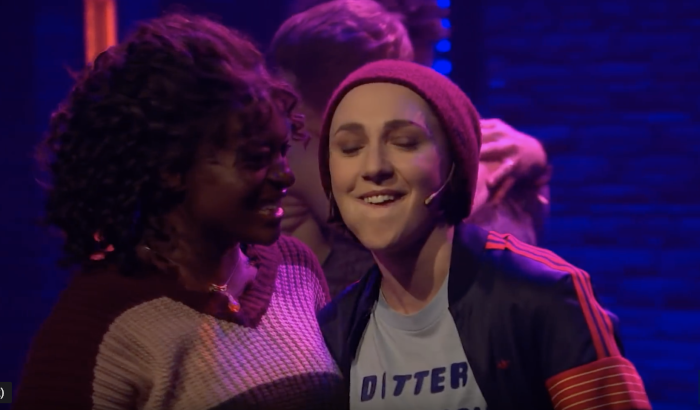 I love Alanis Morissette. I really do. In fact, Seth — who saw an early version of Diablo Cody’s stage production of Jagged Little Pill in Boston two years ago — got me and the boy tickets to see Alannis this summer with Liz Phair and Garbage. It will be the boy’s first concert, and I feel good about that. For the rest of his life, when someone asks him, “What was your first concert?” he will say, “These women rockers from the ’90s I’d never heard of, but it was a blast! I saw it with my Dad and Uncle Seth, and my Dad drank too much and broke his arm trying to crowd surf because all those Boomers couldn’t hold his weight.” (Teenagers call everyone over the age of 30 a Boomer now, no matter how many times you insist that you are NOT a f**king Boomer, you little jerkface!).

What I don’t feel good about is the performance of “Hand in My Pocket” on last night’s Late Night with Seth Meyers. I mean, the Broadway production may be very good — in fact, Seth favorably reviewed the Boston version — but this out-of-context performance is so bad that my body may have fully cringed inside out. Like, I feel like I may need to listen to some Motörhead just to pop my body back into place.

It hurts so much to watch, so I beseech you to do so! The high five alone is enough to give you cringe whiplash.

Again, it might work much better in the context of the entire play in a Broadway theater. Also, Alannis and Ryan Reynolds are the Keanu and Winona of the aughts. I will not be moved from this.

← Prince Andrew Not Co-operating With FBI on Jeffrey Epstein Case; Accusers Outraged | Well That's It, We Can Shut Down Twitter Now, Everyone. Job Done →