SPOILERS AHEAD FOR THE NOV. 19, 2021 EPISODE OF THE GREAT BRITISH BAKING SHOW

Here is an absurd thing I did this weekend: I watched the semifinals episode of The Great British Baking Show on Netflix (or The Great British Bake Off, or GBBO, if you refuse to give into the American renaming of the show), and I cried the whole time twice, and took 1,274 screengrabs on my computer. ONE THOUSAND. AND TWO HUNDRED. AND SEVENTY FOUR. Never tell me that pop culture writing does not include extensive research and archiving!

Yes, most of those screengrabs were of Chigs’ face, for personal reasons.

But a solid chunk of them were also because this episode was the best of this whole season, and this season is itself far better than the series’ two preceding seasons, and I really think we are looking at a Ruby/Rahul/Kim-Joy or Nadiya/Tamal/Ian retread here, in which all three people are coming into the final evenly matched and consistently supportive of each other and goddammit, isn’t it just great when people are nice to each other? And when they also really want to win?

I do not think the last few seasons of GBBO have been great. There was the very young season, in which the baby contestants did not know what lemon curd was; get out of here with that. Come back to me when you can whisk egg yolks and citrus juice together into something tart and viscous and magnificent and not curdled! And then there was the first COVID-19 season, which suffered from both really goofily elaborate challenges (remember the caged tart?) and what I perceived as very inconsistent judging. I didn’t agree with the winner last year, which felt like a course correction for the preceding year rather than a genuinely judged final, and basically what I’m saying is: The casting has been up and down lately, and Prue and Paul have been a sometimes strange duo. It feels like the show is editing out portions of judging, so people are baking more elements than we see the judges actually tasting, and the Noel and Matt pairing continues to wound me. Like, what the hell is this, man? These sketches are AWFUL. 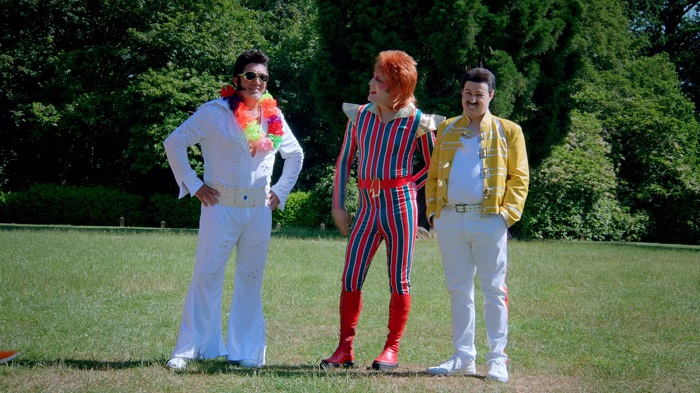 BUT. BUT. BUT. This season has been so good from the very beginning, and it finally feels like things have clicked. Like Paul and Prue are complementing each other as judges, rather than constantly going back on things they’ve said or contradicting each other. Matt has calmed down a fair amount since last season. The tent still doesn’t have air conditioning, which is unbelievably dumb, but the challenges this year haven’t been so over-the-top as in recent years. And, most importantly, the contestants! Hot damn, these contestants! A mix of enthusiastic, gung-ho, genuinely excited people who mostly seem very deserving of their presence there! I know people were mixed on George, but I think he was always trying very hard, and often had good results! I liked Freya too, but I think going vegan-only for so many challenges was a hindrance, although a morally righteous one! And at a certain point, I realized that I wanted everyone in the tent to win, and for no one to go home—and it really felt like the people in the tent felt that, too.

this high-five solidarity was about when ALL MY TEARS STARTED COMING OUT. pic.twitter.com/KG5NC94dNk

It’s when Lizzie helps Crystelle make an isomalt dome, or Chigs helps Amanda move her collapsing terrine pie. It’s Chigs saying some variation of “Well done” to every single other baker, and everyone rolling their eyes at Jürgen’s very loud dough-handling techniques but also being seemingly legitimately thrilled by his bakes. It’s Giuseppe, an Italian man, actually saying “Mamma mia!” out loud at the end of a stressful challenge. That is the good shit!

Which leads us to Pâtisserie Week, where that perfect “Mamma mia!” moment is just one of many delightful things to happen. On the one hand, this episode was always going to be a heartbreaker. Jürgen, Giuseppe, Chigs, and Crystelle are all exceptional, and there’s never going to be a four-person GBBO final. On the other hand, again, I do not think Jürgen was as safe as people thought! He started off very strong and won a series of Star Baker titles, but who also benefited, I think, from Paul and Prue’s favorable judging over the season even when his bakes fell flat. They really cursed him with German Week, but he didn’t exactly rise to the occasion. His chouxnuts weren’t puffy at all. They strongly disliked his triple nut caramel tart. Honestly, I thought he should have gone home last week for his failed macarons and that sloppy brown birthday cake; I really thought Lizzie had earned her place in the semifinals with that amazing showstopper Koosh ball cake. Alas. So Jürgen was formidable but also had a tendency, it seemed, to overcomplicate his ideas or not pull off his executions.

Which left Giuseppe, Chigs, and Crystelle, and all of them are so passionate and so gifted. To be true, they haven’t all had great seasons. Giuseppe takes classical Italian flavors and revamps them into something new, but he’s sometimes faltered in design and decoration. Chigs, who has only been baking for a year, has an intuitive grasp of the precision required for baking, and his attention to detail makes him quite good at finesse, Paul and Prue’s favorite word this season, but his flavors aren’t always strong. And Crystelle, who has a little bit of self-deprecation, a la Nadiya and Rahul, has very well-thought-out, well-considered bakes, but also tends to repeat herself. I do not understand her obsession with miso caramel at all! She pipes far too many buttercream flavors for my liking! But remember that curry pie? GIVE IT TO ME.

So we head into that semifinal with everyone capable of success or failure, even Jürgen! And everyone steps up, or tries to step up, to the best of their ability, which makes for an exceptionally pleasing-to-watch episode. Look at how happy Crystelle is to get a handshake for her black sesame and yuzu slices! 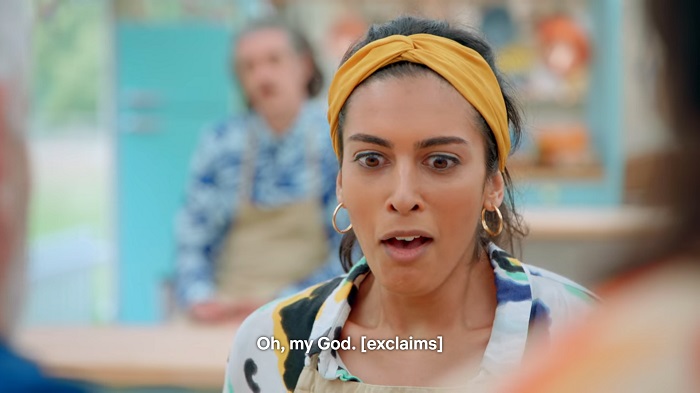 And look at how happy Chigs is for her! 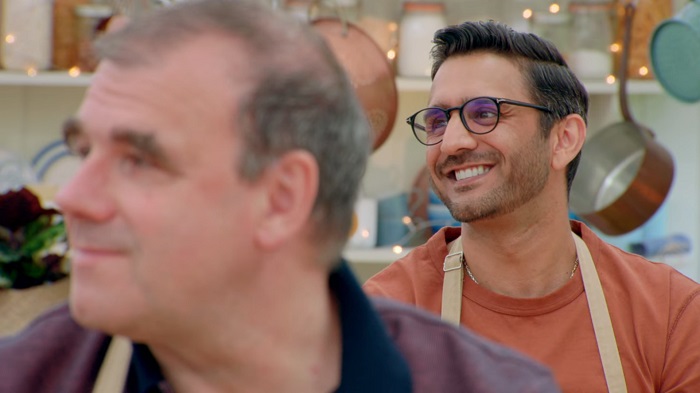 Yes, it was shocking that Jürgen didn’t get a handshake in the signature challenge and the other three did—but there’s precedent for that. In the final years ago with Candice/Andrew/Jane, Candice and Jane got handshakes for their meringue crowns but Andrew didn’t, which actually led to this funny moment of synchronicity between seasons: 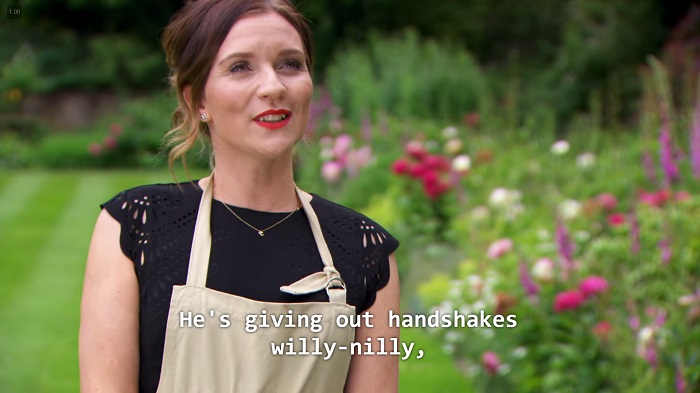 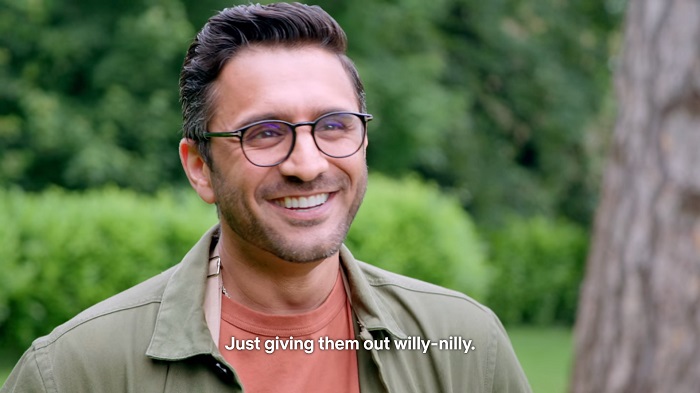 And yes, it was dispiriting when Chigs’s pistachio mousseline—excuse me, Mussolini—didn’t set during the technical. But the fact that he rallied and kept going anyway, no holds barred, for his The Apple Doesn’t Fall Far from the Tree entremets presentation with caramelized apple, white chocolate, hazelnut, and cinnamon was inspirational! The fact that Giuseppe went all-in on a Leaning Tower of Pisa entremets display with pine nuts and cherries that he hadn’t tried before, that was inspirational too! And Crystelle’s family-inspired Tropical Wedding display, full of passionfruit and mango! And Jürgen’s Torii Gate in the Sea architectural Shinto-inspired display with raspberry, white chocolate, matcha, and gingerbread, which made me think that the Jürgenator is actually a pretty philosophical dude! Everyone did their best, and everyone cheered for each other, and everyone mostly succeeded. If Jürgen’s entremets were less matcha-y, would he have stayed and Giuseppe would have left? Is it weird that Paul and Prue had all four bake edible centerpieces for their entremets displays, but then didn’t taste any of those baked elements? Shouldn’t Jürgen actually baking his gingerbread count for more than Crystelle and Giuseppe only using puffed rice and marshmallow for their structural element?

Sure, we could argue those questions over and over. I am sure there are GBBO sub-Reddits doing so as I type! But I realized at a certain point during this episode that I was crying, and that wasn’t going to stop. Maybe because the episode seemed to be giving Chigs the “going home” edit early by emphasizing his inexperience, and that hit me. Or maybe because Jürgen, for the first time, seemed rattled, mumbling through his usual banter with Noel. Or possibly because Crystelle and Giuseppe were each struggling with the glaze on their entremets—and then Chigs, with his big beautiful stupid hands, knocked into his cinnamon biscuit tree and caused part of it to break! Nooo! All of it was stressful, but the good kind, like when you’re watching a heist movie and you’re certain the thieves will get away but until then your stomach feels like it’s eating itself.

That’s how it felt when it was announced that Jürgen was going home, but there’s comfort, too, in knowing that Jürgen had anticipated it, and had made peace with it. He had a good time, and that good time being over didn’t negate what had come before. 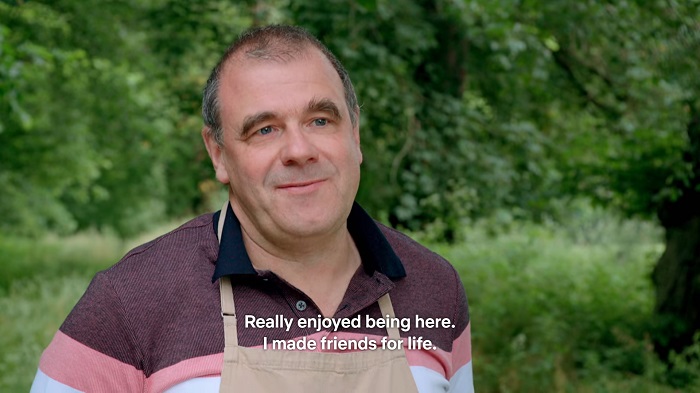 That’s ultimately the life lesson that this silly little show about a group of people in a tent, baking and cooking and spinning sugar and burning caramel, provides in its best seasons. It’s not life or death, but it is life, and all the exertion and energy and passion and confidence and joy that comes out of it. It’s Chigs’ and Crystelle’s air high five, and everyone’s shaky exhales and wide smiles, and the sense of satisfaction that comes from a job well done. We don’t need the caress of Paul Hollywood’s sausage fingers to feel like real human beings, but when he tells Chigs, “You’ve been on a journey”—we all have, haven’t we? And sometimes the journey matters more than the destination. What a great season of GBBO. Whoever wins, deserves it. And if that person is Chigs, well. Please check on my health.

The season finale of this season of The Great British Baking Show premieres on Netflix on Friday, Nov. 26.


← Watch: 'If Video Game Companies Made Jigsaw Puzzles' | 'Mayor Pete' Covers the Rise of Pete Buttigieg But Papers Over the Fall →