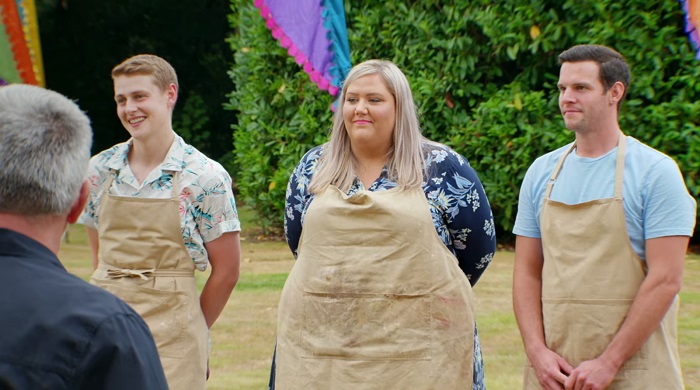 ‘Great British Bake Off’ Season Finale Recap: Why Even with Technicals?

Did you watch the series 11/season 8 finale of The Great British Bake Off yet, whether you’re watching in the UK or in Netflix in the US? The finale was just added to Netflix on Nov. 27 as a post-Thanksgiving treat! DID YOU WATCH? If you didn’t yet, BEWARE, AND BE AWARE: SPOILERS FOLLOW!

OK, so let’s get into this. Paul and Prue, be real right now: What the fuck was that?

Peter? REALLY? Come on. To be honest with myself, we all should have known. As soon as (ahem, onetime Tory) Prue said the 20-year-old contestant reminded her of her grandson, and as soon as Paul gushed about his flavours, we should have known. This precocious Scottish baby, this Tethered version of Andrew M. Smyth, this perpetually rosy-cheeked Hufflepuff, was going to win the whole thing, and there was nothing we could do to stop it.

I guess I’m just exhausted because the narrative was so obvious. Peter, the wunderkind, was like the producers of GBBO defending themselves after the debacle of last season, in which the youngest group of contestants ever were often flummoxed by what seemed like pretty typical GBBO challenges. You should know how to make lemon curd and choux pastry if you are a contestant on this show! Come on! Remember that unceasing nightmare of mediocrity? There was a lot of grumbling in response to last season, some of it quite justified, from viewers about how youth just doesn’t match experience, which I think is sometimes forgotten by Paul and Prue. Mary Berry was more forgiving when she was a judge, but if you look at all the GBBO winners, most of them skew quite young. Nancy Birtwhistle won at 60 years old, making her the oldest GBBO winner, and since then, it seems like Paul is a real jerk to older contestants—he doesn’t think they’re adaptable, he doesn’t think they’re quick on their feet. So we’ve had an ageist problem on GBBO for a while, and last season felt like the apex of that, and then this season felt like a correction in the other direction. Wasn’t Peter so inventive! Wasn’t Peter so good! When Peter made a mistake, forgive him for his lack of experience! Prue and Paul couldn’t stop tripping over themselves in praise, and by crowning him, it’s like GBBO patting itself on the back.

Of course, constantly praising Peter was often at the expense of other contestants who certainly seemed just as good, and this is where I have to share that I don’t understand how Dave didn’t win this thing. (Yes, I’ll get to Laura later.) Dave and Peter seemed pretty neck and neck after the finale signature challenge: Yes, Paul and Prue liked the crunchy texture and custard flavors of Peter’s Cranachan custard slice, but Paul noted that it was a bit thick; meanwhile, Dave also flubbed a bit with a slightly too-set custard in his Caramel Latte Custard Slice, but Prue loved the coffee flavor. Seems even to me! 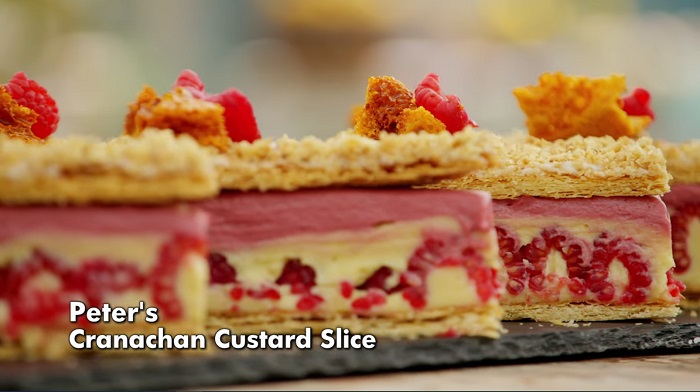 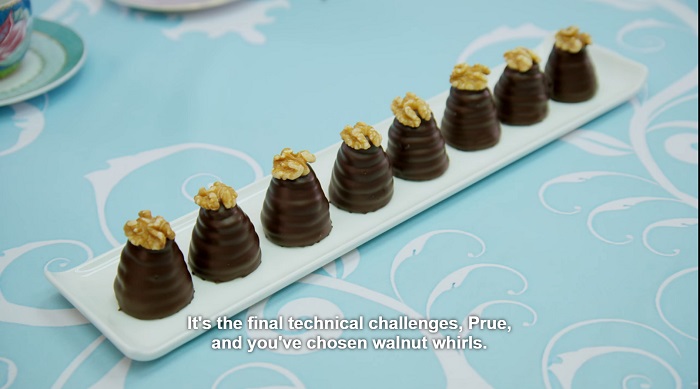 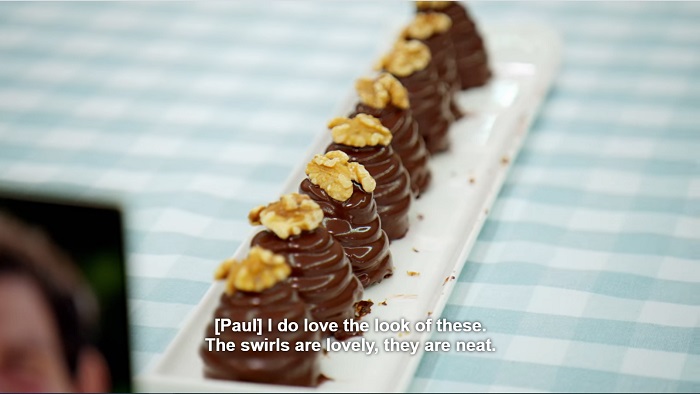 Let me say this first: I inherently respect that Dave used his showstopper to recreate challenges he hadn’t done so hot on earlier in the season, and I inherently disrespect that Peter used as his showstopper theme “chaos.” That, to me, seems like a built-in excuse in case something went wrong with his bake, like a preemptive hand-waving away if something were messy or crooked or unfinished. This is GBBO! Shit is meant to be precise! But again, I should have known better. I should have known that Paul and Prue would look the other way at Peter’s mistakes to maintain the narrative, and they did.

Because consider: The top puffed-rice layer of Peter’s Bonkers Bake Off Bubble Cake looked, in the passive-aggressive vernacular of GBBO, rustic. It looked rushed, baby! (To bring up another familiar criticism: Why didn’t Paul and Prue taste the puffed rice and judge that, as they did so many seasons ago with Flora’s puffed rice?) Anyway, about Peter’s signature, Paul and Prue had criticisms about two things: His base cake, the Victoria sandwich, was dry and didn’t have enough strawberry cream; and his friands, or mini almond cakes, were stodgy and doughy. 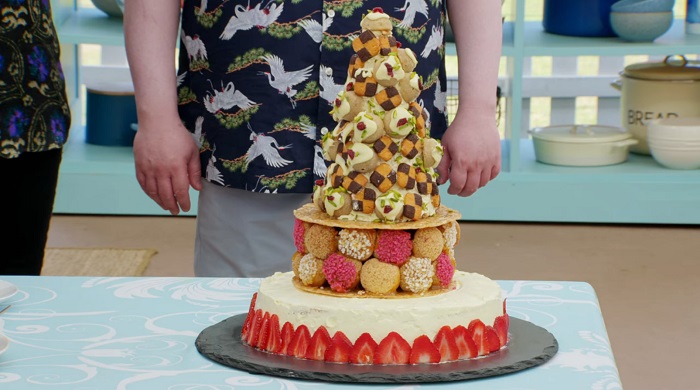 And, to be fair, Dave’s Tower to Redemption cake also had issues: The Fraisier cake was a “luxury slice of cake,” according to Prue, and Paul quite liked Dave’s dark and white chocolate and macadamia nut brownies. But his chocolate babkas were overbaked and a little dry, and his choux buns didn’t puff enough, nor was their cream filling set enough. Once again, just like Peter, two disappointing things vs. two very good things. 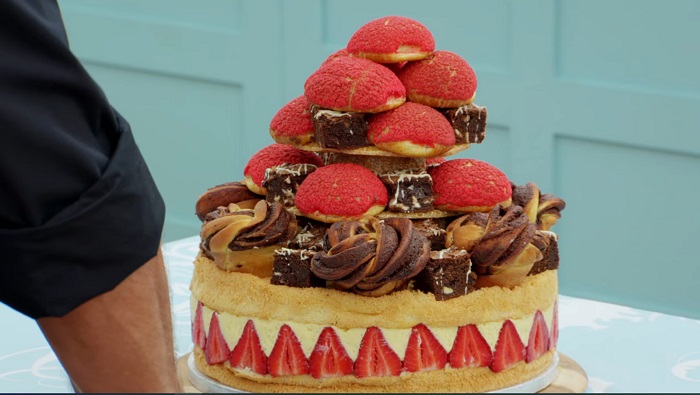 I’ve been irritated by Matt all season, but it’s really a mood when Matt is the voice of reason compared with Paul and Prue, and called it a “draw.” In this situation, I would think it comes down to the technical being the tiebreaker, OR, the fact that Dave attempted more challenging bakes, and set himself a greater obstacle by revisiting things at which he had failed, and trying to improve them. That, in and of itself, is commendable! And he did improve! But no. Given the “draw” situation, Paul and Prue went with their favorite, and maintained the decision that had already seemed predetermined, and here we are, with Peter as our champion.

Look, none of this is to say I think Peter is a bad person or anything like that! I threw some mockery his way earlier in the piece, but I’m more annoyed by a season in which it felt like Paul and Prue kept around people they liked, or people whom they thought made good storylines, rather than people who had legitimate, sustained, consistent talent. Which is why we’re now going to talk about Laura and Hermine, because once again: What the fuck was that?

Let’s revisit last week: Pâtisserie Week should have been Hermine’s time to shine, given her French baking background. And I will admit that she had a slight misstep at first: Paul and Prue gushed about the flavor of her Creme ét Abricot Baba au Rhum savarins, but thought the dough was too tough. But Hermine absolutely should have won the technical, Danish Kransekake Cornucopia Cake, for being the only person who didn’t overbake her pastry, and who actually assembled the stupid thing to look like a horn. Who cares if the icing was applied incorrectly when it looked and tasted right otherwise? 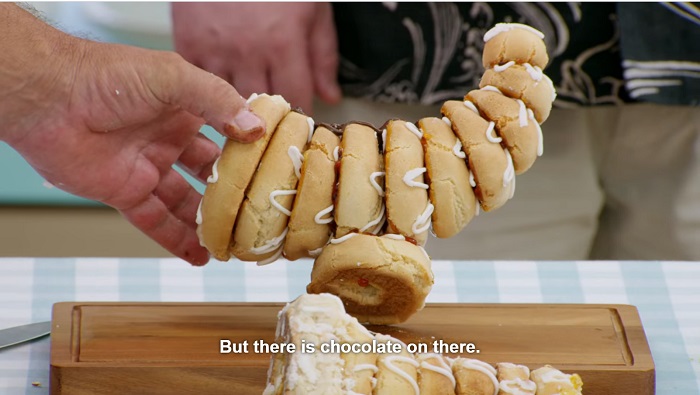 But no: Top spot in the technical went to Peter for his a half-dry cake that wasn’t even assembled correctly.

And I think that rattled Hermine so much that she completely changed her plan for her showstopper on the fly. I truly believe that overt favoritism made Hermine think, “Well, what can I do to impress them?” and instead we got a half-cocked idea for the “The Best of Hermine” Cube Cakes that didn’t really work. 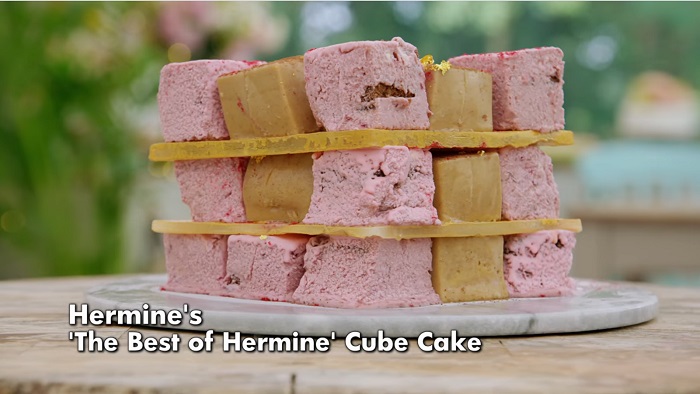 But—even still—should Hermine have stayed while Laura went home? Yes, I deeply believe this. How did Laura keep scraping through these challenges?! Remember her terrible Freddie Mercury bust in Cake Week? Her leaking Piggy Pork Belly Buns during Japanese Week (still yikes on that theme)? Her mostly melted Death by Chocolate ice cream cake during ’80s Week? Her placing fourth, and last, in the Danish Kransekake Cornucopia Cake technical in Pâtisserie Week? Her horrendously iced Black Forest Cube Cakes in that same week? 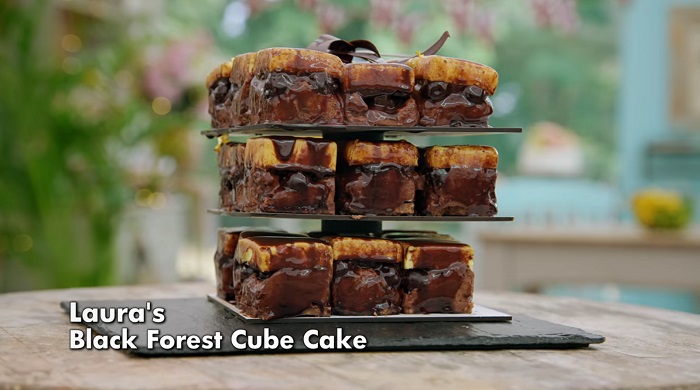 Paul and Prue have (often, but especially this season) done a horrible job week to week in terms of consistent judging—are they sending people home based on their work only that week, or on what they think that individual is capable of doing, or what they have done so far in preceding weeks?

By ANY ONE OF THOSE METRICS, Laura should have gone home long ago, and she really should have gone home so that Hermine could stick around. It’s impossible to say if Hermine would have done better in the final than Laura, but there was such a huge gap in terms of quality between Laura’s Yuzu Custard Slice and her walnut whirls compared with Dave’s and Peter’s, and it looked like an incredibly stressful and ultimately disappointing experience for her. 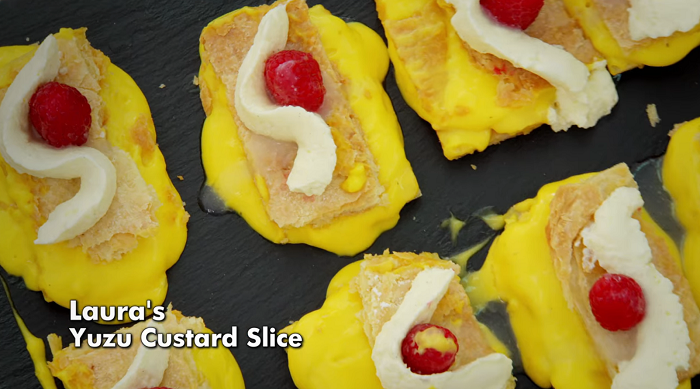 All of the accommodations made for Laura, when it seemed like Hermine got kicked off based on one bad showstopper alone, was a really fucking bad look.

So it goes, another season of GBBO wrapped, with a particularly disappointing conclusion. This now makes two back-to-back seasons with confusing judging decisions, lackluster challenges, and competitors who seemed to fall apart right when the highest level of pressure hit. What do I want from this show at this point? I’ll be honest with you: I want a redemption season, where people who were eliminated come back and compete again. GBBO already does this for the holiday specials; why not for a whole season? Say it with me now: JUSTICE FOR HERMINE.