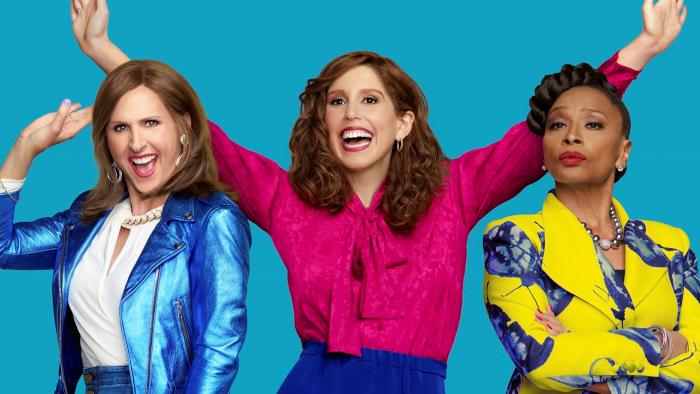 SNL alum Vanessa Bayer was diagnosed with ALL leukemia when she was 15 years old, a type of blood cancer that requires nearly a year of intense chemotherapy and another two years of maintenance chemo. It’s a hell of a thing for a teenager to have to endure, and I cannot say enough about how Bayer came out of it with her spirit and sense of humor fully intact. If anyone deserves to create a cancer comedy, it is Vanessa Bayer. Who better to tell a story than someone who has gone through the experience? Unfortunately, it’s cancer — or specifically, the lack of it — that prevents I Love That for You from being a much better show than it could and should be.

In I Love That for You, Bayer plays Joanna Gold, a teenage cancer survivor who — now in her 30s — is at a dead-end in her life and still lives under the watchful eyes of her parents. While Joanna was undergoing cancer treatment, however, she became enamored with a home shopping network. Twenty years later, she auditions to become an on-air host, lands the gig, and proves that she has a knack for selling useless products on TV. On the job, she also meets her childhood idol, Jackie Stilton (Molly Shannon), the network’s most successful host. Jackie is going through a divorce but takes a shine to Joanna because Joanna feeds her ego. There’s also another host, Beth Ann McGann (Ayden Mayeri) who sees Joanna as a threat, a crew member who is a potential love interest, Jordan Wahl (Paul James), and a hard-charging, cutthroat boss played by Jennifer Lewis, who has a kiss-ass hanger-on assistant (Matt Rogers).

All the ingredients — and the cast — for a great comedy exist in I Love That for You, including its creators, Bayer herself and a longtime SNL writer, Jeremy Beiler. The pilot episode is very good, and I almost immediately took a liking to Bayer and Shannon’s characters. The home shopping network setting is likewise ripe for comedic possibilities.

The problem is the premise: After Joanna makes a mistake on her first day on the job and Lewis’ character, Patricia, fires her, Joanna tries to hang on to the position by lying and telling everyone that her cancer has returned. It works. It works too well, in fact, because Patricia insists that cancer become part of Joanna’s on-air narrative. By exploiting an illness that does not exist, Joanna’s ability to push products on air only grows. Her network competition, Beth Ann, sees her as a threat, and she will obviously do what she can to out her and destroy Joanna’s career.

That’s the tension in I Love That for You, and that tension is way too much for a comedy. Joanna has to cope with the guilt of lying while she continues to dig herself deeper into a hole the longer she sustains the lie. The problem is that not only is her job built on a lie but so are her relationships. I don’t see how Bayer and Beiler can write themselves out of this corner. There’s a lot that people are willing to forgive — obviously — but you can’t come back from fake cancer even if you experienced real cancer in the past. If she comes clean, she loses her job and her friends and she blows up the show’s premise, but if she doesn’t, the audience has to sit with this discomfort right along with Bayer’s character until she does. We want to root for her — and it’s easy to do so — so we don’t want to see her get caught. Getting caught, however, is inevitable, and the longer the lie persists, the harder it will be to overcome (just ask that Grey’s Anatomy writer).

I genuinely do not see a realistic scenario in which this works out for Joanna, and for a character with whom we immediately invest, that’s a problem. It’s one thing to lie, come clean, and apologize at the end of a 22-minute episode, but it’s quite another when the lead character and the entire series are predicated on an unforgivable lie. Nevertheless, I will soldier on, because I love the cast, and Bayer deserves to tell this story. I will do so, nevertheless, knowing that it can only end in disappointment.