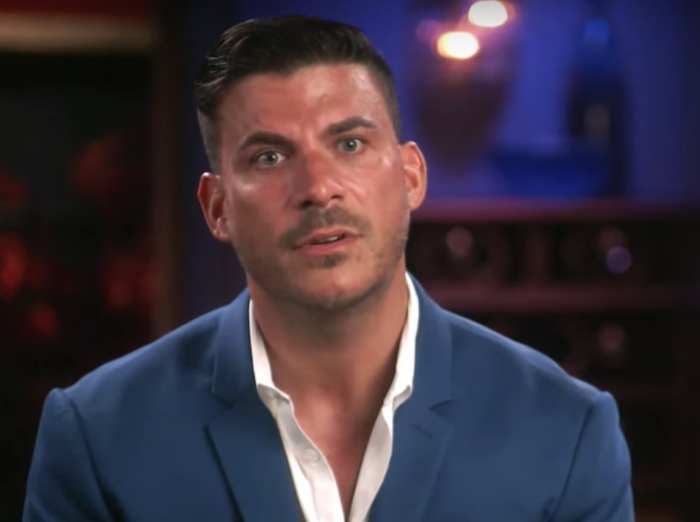 Friends, there is no way to sugar coat this. I’m kind of bored with season 8 already. The good times couldn’t last forever—and the Vanderpump Rules crew did give us some epically good and entertaining times, in particular, one person.

I’ll never forget the multiple times Jax Taylor took off his shirt to fight random dudes in various parking lots. Or how Jax stole sunglasses because that’s what you do in Hawaii on vacation. Or how Jax cheated on Stassi and then got his ass kicked out of her apartment. Jax Taylor has given us years of stellar TV—but all good things have to end sometimes.

Now that our core cast is older, (questionably) wiser, but definitely more financially stable, the stupid things they did to, and/or with, each other have simmered down. They were a thirsty group of people when we first met them seven years ago, and now that the thirst has been quenched, we’re starting to fall into a rut where the same things keep happening over and over.

For example. How many times has Lala had the conversation with DJ James Kennedy like she did in this ep that he did some shitty things, but he’s forgiven now? I feel like we get at least one a season. We’ve seen the cast try comedy before, like Dayna did last night. We’ve seen them get ready for a bachelorette party. We’ve seen them do “sexy” photoshoots for their upcoming marriage (Scheana pulled this long before Brittany did it last night, because of course she did.)

I don’t know, the show is getting a little stale and I’m not sure how they can return it to a fraction of its glory from previous years. Maybe it’s time for a spin-off to follow some of the people who work at Vanderpump Cocktail Garden in Vegas?

So, what happened that was new-ish, last night?

We found out more about Dayna, her background, and why she’s in LA (to fulfill her late mother’s wish that she really make a go of trying to be a comedian.) I like Dayna, but I don’t see the attraction with Max. He seems like a sleezy dude who just wants to sleep around—which was all but confirmed by Scheana, who gave this guy an Apple Watch for Thanksgiving. I love Scheana, I hope she never changes.

Jax and Brittany went to buy their wedding rings, the highlight of which is Jax in a talking head commenting that he and Brittany are not “Meghan Markle…and…whatever his name is?” I adore Jax, and I love him a little bit more for knowing who Meghan Markle is and not Prince Harry. This man works overtime to make sure this show is entertaining.

This is why I was surprised that he was the voice of reason in his discussion with Doute about what a parasitic leech Carter is on her finances and her soul. F*ck me, Carter is gross. He is totally taking advantage of my dear Doute and I am not here for it. The sooner she gets rid of him, the better. Puke.

Finally, friends, I have good news if you were like me and were very intrigued as to what Stassi’s favorite candle is, that she insisted on bringing to Katie’s home in order to make it look more feminine and smell like Stassi. I am happy to report that I spent the better part of an hour diving deep, and, well? I’m pretty sure I know what it is. You heard it here first, folks—

Like a psycho, I just spent 20 mins trying to decipher what Stassi's favorite candle that she gave to Katie on #PumpRules last night, and I'm pretty sure I found it. Tocca "Bianca" pic.twitter.com/z0wgHmoTJQ

(Apologies for the indulgence of embedding my own tweet. I’m really proud of myself for putting on my bedazzled detective hat and finding the answer. No, I haven’t ordered this candle…yet, but I do have plans to go to the fancy pants boutique in my neighborhood today to smell it. Is that weird?)

Probably the most real part of the show came in one of the fakest set-ups. Ariana, for plot reasons, decided that she should go pull a shift or two at SUR, and had to ask Lisa for the privilege of getting her job back. The conversation morphed into something more authentic, with Ariana admitting to Lisa that she is clinically depressed, unable to get out of bed some days, and Lisa told her she can pull herself out of it like Lisa did with her own depression.

Aww, Ariana. I feel for her. I know what this feels like, and her talking head where she admitted depression is something she will have to carry with her for the rest of her life hit home. I’ve said those exact words at times. It’s very hard to see a way out of it when you’re in the middle of it, and I wish her the best. It can and will get better, with time and proper treatment, but enduring it in the moment is the worst. Hang in there, lady!

If you noticed a discrepancy in the way Ariana looked in that scene, you’re not alone. Here’s the example, and her explanation:

not reshoots. it’s a pickup shot.

That about sums up the ep. Looks like Stassi is going to lay into Sandoval next ep, so you know I’ll be watching, and hoping that we get some classic VPR moments from that fight. Until then, friends.