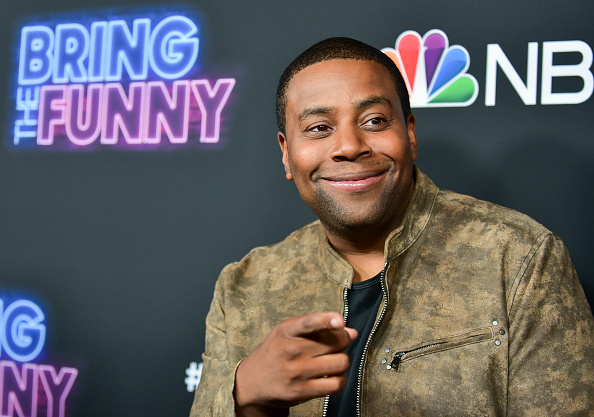 With a mere month to go before the Emmy ceremony, NBC has landed on a host: longtime SNL veteran Kenan Thompson. Is he the greatest choice ever as host of an awards show? Perhaps not, but he’s well-liked (a notch below National Treasure status) and unlikely to incur much backlash. That’s about as good as it gets for awards ceremony hosts these days. Plus, he gives great reaction face.

— Criminal Minds has been revived for Paramont+ after being off the air for a whopping two years. When Paget Brewster returns, however, her character will sport gray hair. It works, as all things Paget Brewser usually do:

Oh, hi Guys !! This is my first ⁦@criminalminds⁩ hair and make up from this morning…. I hope you’re all excited for a slightly older, sassier, no filters, grey-haired Prentiss. And if you aren’t, that’s cool, just tell someone else. pic.twitter.com/9gW05qcCke

— 9-1-1 fans who love a good disaster can look forward to a blimp crashing onto a soccer field in the season premiere of the series set for September 16th.

— Kaley Cuoco is taking a break from HBO Max’s The Flight Attendant (a third season is up in the air) to star in Peacock’s Based On A True Story, a darkly-comic thriller series about “a realtor, a plumber and a former tennis star whose lives unexpectedly collide, exposing America’s obsession with true crime, murder and the slow close toilet seat.” She has already committed to two seasons of the series.

— We haven’t seen Lamorne Morris since his Woke was canceled (and I don’t think many people saw Woke), but he’s returning along with Joe Keery (Stranger Things) and Richa Moorjani, who will join Jon Hamm, Jennifer Jason Leigh, and Juno Temple in the next season of Fargo.

— Armando Iannucci’s Avenue 5 may have been a misfire (a second season is still reportedly in the can), but he’s returning with Sam Mendes for a new project with a clever premise. HBO’s The Franchise will follow “a hopeful crew trapped inside the dysfunctional, nonsensical, joyous hellscape of franchise superhero movie-making. If and when they finally make the day, the question they must face — is this Hollywood’s new dawn or cinema’s last stand? Is this a dream factory or a chemical plant?”

— Finally, Q-Force on Netflix is done after one season.

← Rob McElhenney Shines As Host Of Jimmy Kimmel: Live! | Watch: 'Why You'll Never Own a House' →