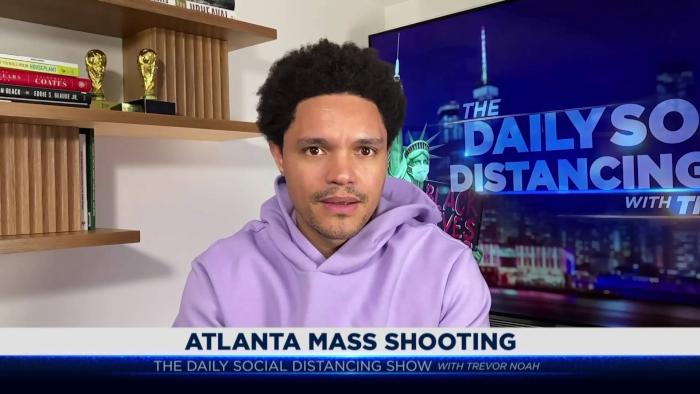 Trevor Noah: 'Your Murders Speak Louder Than Your Words'

“He was pretty much fed up and had been kind of at the end of his rope,” Captain Jay Baker said about the Atlanta mass shooter. “Yesterday was a really bad day for him, and this is what he did.”

“It’s always interesting who the police choose to try and humanize,” an angry Trevor Noah said in response during last night’s The Daily Show. In this particular case, the shooter blamed his “sex addiction,” and Captain Baker — who posted several anti-Asian Facebook posts last year — seemed to want to blame anything else except racism. “This guy blamed a specific race of people for his problems, and then murdered them because of it. If that’s not racism, then the word has no meaning.”

The question is why would a police officer even want to blame anything other than the obvious? The answer to that is obvious, as well. It’s because if it’s racism, it makes white people with a history of anti-Asian Facebook posts complicit.

“Many people are saying, ‘Stop being so woke, stop being so dramatic. Kung-flu, come on. It’s just a joke,” Trevor Noah beseeched. But it’s not just a joke. Because all that anti-PC, cancel-culture bullsh*t led us to a shooting on Tuesday night.

“Racism, misogyny, gun violence, mental illness, and honestly, this incident might have been all of those things combined because it doesn’t have to be one thing on its own,” Noah said. “America is a rich tapestry of mass shooting motivations.”

The Atlanta shooter blamed a specific race of people for his problems, and then murdered them because of it. If that’s not racism, then the word has no meaning. pic.twitter.com/4gIKN5hM28


← Trailer Round-Up: 'Arlo The Alligator Boy,' 'The Irregulars,' 'The Falcon and The Winter Soldier' And More | Conan Trades Insults With Joel McHale →