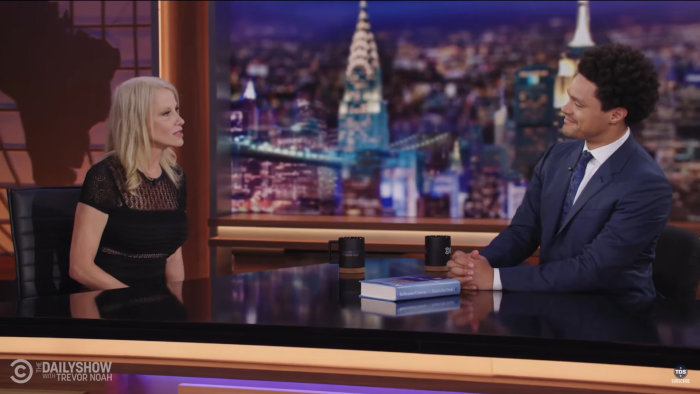 “Why?” That’s the question that Trevor Noah was asked by his friends when he told them Kellyanne Conway would be on The Daily Show. She thought she knew why. Her answer involved playing the victim. But the fact is that people asked “Why” because she is known for lying outright, not answering questions, and shifting blame as much as possible. Surprise! She did all three of those things ad nauseam in this interview.

Conway is one of the worst kinds of Trump Republicans. She’s efficient, for one. There is no stopping and starting, no flubbing or stuttering. She can say something demonstrably false with all the confidence of a mind reader. She also possesses an unfettered arrogance that’s more worthy of a bully on Stranger Things. She treats politics like it’s a game while simultaneously lamenting it. She’s everything that Trump’s base loves turned up to eleven but without the inherent bananas behavior that seems to follow most of her compatriots.

To Noah’s credit, he does try to talk to her like she’s a human being. His questions were fair, so she didn’t answer them. Any time she tried to smugly play to the crowd, which was a lot, he tried to reel her back in. He was giving her a chance, often in vain, to have a “normal” interview, one where she didn’t pounce on any opportunity to jab at her opponents. To be frank, it didn’t work. Yes, there were times when Noah got her to seem normal. But at the end of the day, she’s not interested in that.

Kellyanne Conway is interested in appealing to rubes. She wants people who are easily swayed by confidence, a nice smile, and the ability to string two sentences together without saying “um.” It’s all a ruse and even though Noah can see right through it, even he can’t penetrate it. It’s not for lack of trying. Noah is at his best here as well. He’s appealing to her human side. The problem is that side was sold off a long time ago.