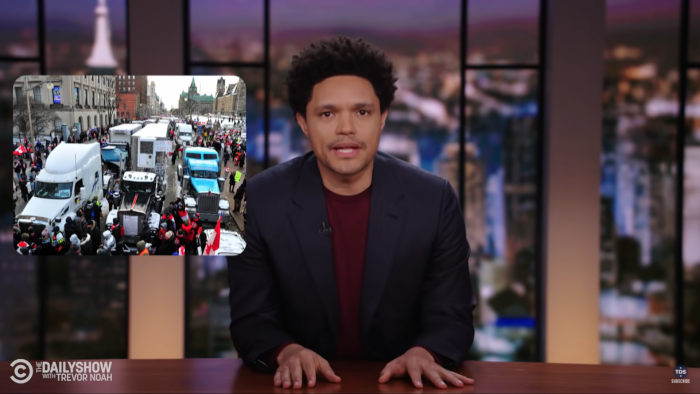 Protests have been an essential part of American history. Great changes have been made after scores of American citizens stood up for what they believed in. As is their right, some people have chosen to protest for less than noble reasons. Either trying to strip rights from others or, in the case of the American trucker convoy, making things less safe. Luckily, as Trevor Noah pointed out in a recent episode of The Daily Show, they haven’t been that successful.

The American Trucker Convoy was protesting against vaccine mandates. The reasons ranged from equating it to slavery to being afraid that it would “digitile” them. Ya know, classic stuff. Their nonsensical reasons were made even more embarrassing by the fact that they were much less successful than their Canadian counterparts. That convoy stopped traffic. Some thought it would even threaten the Super Bowl. No way was this going to happen, but people thought it anyway.

The trucker bit doesn’t come in until the end. Throughout, he takes shots at Bill Barr, Andrew Cuomo and makes a joke about John Oliver that made me cackle.

The truckers may seem like an easy target. Some of them appear to be a little… off. That doesn’t make what they’re trying to accomplish any less shitty. They’re also failing. Miserably. So take them shots. By shots, I mean personal jabs or insults, not the vaccine. We already know how that’s going to go.