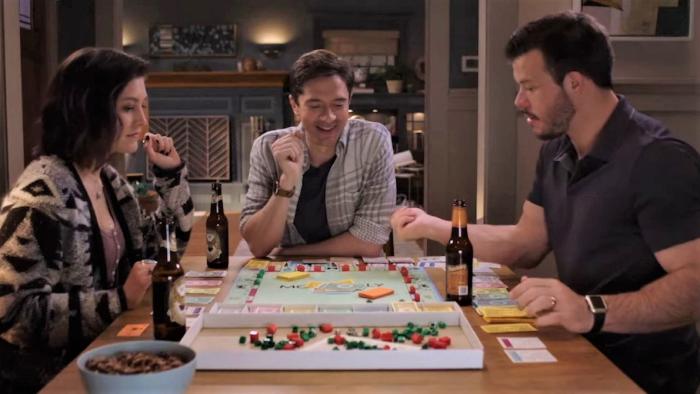 Topher Grace never really went away after he left That ’70s Show, but it seems like he never really became the future star that Ocean’s 12 seemed to want to portend, either. He starred in a steady stream of likable misfires (Take Me Home Tonight, In Good Company, Predators), but I think he remained overshadowed by his poorly received villainous turn in Spider-Man III and never quite recovered. Still, Grace soldiered on and has done some solid, though mostly unrecognized work in movies like American Ultra and BlacKkKlansman, as well as the TV miniseries The Hot Zone.

In ABC’s Home Economics, Grace returns to the medium and format that made him a star: Sitcom television. Honestly, it feels like a more natural fit for him, and he’s well cast in the single-camera family sitcom, which comes from Michael Colton and John Aboud, regular commenters on the old VH1 show Best Week Ever and co-writers on A Futile and Stupid Gesture and Penguins of Madagascar.

Home Economics comes from the Modern Family mold of sitcom, only the focus is less on the composition of the families and more on their socioeconomic status. Topher Grace plays Tom; Caitlin McGee plays Sarah; and Jimmy Tatro (the awesomely dumb guy from American Vandal) plays Connor, who is an awesomely dumb character here, too. The three are siblings, and they each have their own separate families that are struggling in their own different ways. Tom and his wife, Marina (early standout Karla Souza) are the middle-of-the-road family. Tom’s an Ivy leaguer, and a critically beloved writer, which means he’s also secretly poor (but well regarded). They have three kids, and Sarah is amusingly deeply unsatisfied with her life doing laundry and listening to true-crime podcasts on her headphones.

Sarah is married to Denise (SNL’s Sasheer Zamata), and they live a poor, Bohemian lifestyle with two kids in what appears to be a tiny one-bedroom apartment (Sarah has also recently lost her job). Meanwhile, Connor — the dumb brother — is absolutely loaded, because isn’t that the way. He has a kid and they live in Matt Damon’s old house (a joke that is referenced at least 5 times in the episode), but he is going through a divorce.

So, they’re all broken in their own way, and they fight like siblings, and they love each other like siblings, and that’s basically the premise, give or take a Matt Damon joke. As is often the case with sitcoms, it’s hard to make a judgment based only on the pilot, but there is good chemistry, the writing is Happy Endings clever, and I enjoyed chilling with the characters for 22 minutes. That’s about all I have to offer, except that I absolutely expect to continue watching, and that Home Economics feels right at home among the other ABC family sitcom offerings.


← 'Law & Order: Organized Crime' Missed Their Chance to Join the 'Bones' Universe | Khloe, the Streisand Effect, and the Impossible Standards of Kardashian Beauty →