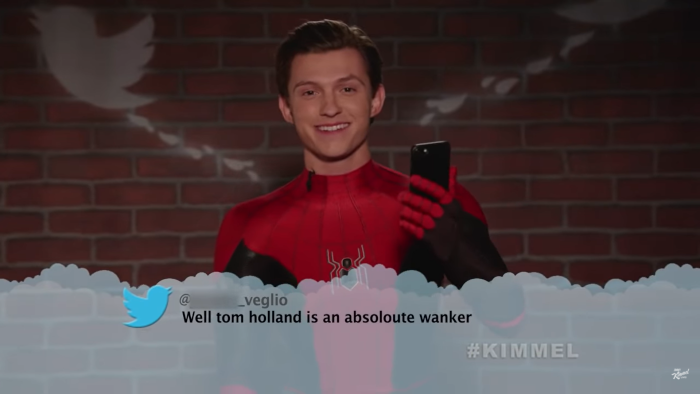 Tom Holland Drops By For A Jam-Packed 'Mean Tweets'

Spider-Man: No Way Home is almost here. Within days the new Marvel film will unleash its secrets upon the world. However, the new film has little to do with this article. I’m so sorry. You likely saw the headline and picture and thought, “Oh, hey, some spidey stuff!” Well, that is hardly the case.

This is a hilarious mean tweet segment. Tom Holland does show up in it, it’s just not all about him. How could it be? Do you want to watch a whole bit that’s just him reading mean tweets about Spider-Man? That… actually does sound pretty great. Dammit. Well, this isn’t Spidey-centric, but there are lots of great celebrities in it!

John Cena shows up. Everybody likes him, right? Now that he’s gone from a jean shorts-wearing wrestler to a suit-wearing actor. Patton Oswalt is in here. He just made his big-screen MCU debut. He was on Agents of S.H.I.E.L.D., but I don’t know if that counts anymore. Like Spider-Man’s status, it can be a bit confusing. Dammit, I brought up Spidey again.

Look, at least part of you showed up to watch a classic Jimmy Kimmel: Live segment. Celebrities reading mean tweets is one of the best things he does. I just knew it would be easier to lure you in if I started with Peter Parker himself. Everyone is gung ho for Spider-Man right now, it just seemed like the right way to go. At least now you get to watch Kevin Hart find out that he is not a human being but just Shaq’s penis. You’re welcome?


← Texts Reveal Desperate Fox News Hosts and Trump Jr. Pleaded with Trump to Call Off Rioters | What is the Baby Bar Exam that Kim Kardashian Passed? →