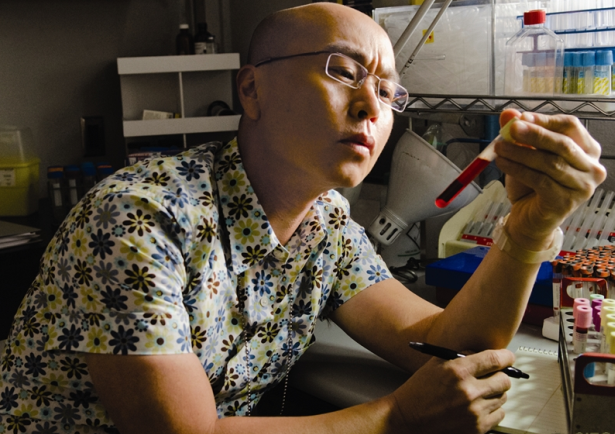 This week’s episode of Dexter is largely centered on Kurt Caldwell’s attempt to murder Harrison and make Dexter watch. He has one of his lackeys abduct Dexter. After Dexter escapes from the lackey’s car, he spends most of the rest of the episode running away from him, which proves to be difficult in the snow with blood dripping from a bullet wound to the leg. Dexter is easy to track, but eventually, Dexter manages to kill the lackey and drive his abandoned truck to Kurt’s cabin.

Before that, however, Kurt continues to bond with Harrison, first with a pitching machine that Harrison allows to bean him repeatedly in the ribs — yikes — and then at Kurt’s cabin, where Harrison and Kurt continue their father-son charade over venison and Scotch that tastes like band-aids. Once Kurt gets Harrison nice and liquored up and convinces Harrison that he is the father he never had, Kurt disappears and returns with a rifle and his serial-killer gear. “Run,” he tells Harrison. He does, but before Kurt can shoot and kill him, Dexter arrives and breaks up the scene. Kurt flees into the forest.

In the car on the drive home, Dexter finally confesses to Harrison. Dexter tells Harrison that, like his son, he was “born in blood” and that he has the same dark urges. He apologizes for not saying so before and tells Harrison that he will teach him the code. An elated Harrison, who finally gains the connection with Dexter that he has for so long sought, hugs his father. It’s a sweet parenting breakthrough, and it only took Dexter essentially confessing to his son that he’s a serial killer after another serial killer tried to kill Harrison. Happy Holidays!

That is not, however, where the annoying continuity error lies. While Dexter is running for his life in the forest, and while Harrison is bonding with Kurt, Angela decides to follow a hunch. She learns that a drug dealer that Dexter nearly abducted and the drug supplier that Dexter killed both have needle marks on their neck. She learns from the coroner that the drug supplier had ketamine in his system. Based on this and a couple of other strange coincidences — Dexter changes his name and leaves Miami; he shows up at Kurt’s cabin just in time to save podcaster Molly — Angela develops a suspicion that Dexter is the Bay Harbor Butcher. Of course, she’s correct, but the evidence she has in support of that suspicion is flimsy, at best.

However, she draws a solid connection between Dexter and the Bay Harbor Butcher when she Googles “ketamine” (what Dexter used to kill the drug supplier) and “Miami PD,” where Dexter used to work.

Here’s the issue, and while it might seem small, it’s a fairly major continuity error for this series. Dexter never used ketamine in Miami. He used M99/Etorphine, which he acquired in Miami under the alias Patrick Bateman, M.D. This was no small thing in the original Dexter. In fact, at one point, Masuka learned that the Bay Harbor Butcher used M99 after doing a tox screen on one of his victims. There’s even an M-99 page on Urban Dictionary that quotes an episode of Dexter and a Dexter wiki page devoted to Dexter’s tranquilizer of choice. Hell, when Dexter used Ketamine on the drug supplier earlier this season, he even said himself that it was not his usual tranquilizer.

Dexter used M99, so how did that Google Search bring up anything?

@CraveCanada @Showtime @SHO_Dexter I know you guys didn’t do 8 years of consistency just to have “bay harbour butcher solved, he would drug them with ketamine” hmm peculiar what happened to the M99?? #dexter

*Semi ep 8 spoilers* Angela googles "Ketamine Miami Metro" & gets results for "Bay Harbor Butcher," but Dexter did not use Ketamine, he used M99. So there's no reason explained yet why Ketamine would link Dexter's killings to make Angela suspicious of him being the killer.

yeah, he used M99, that search shouldn't have brought anything

The writers are making it too convenient for Angela to be the one to figure Dexter out/bring him down. I find it hard to believe they would make this much of a slip up though when M99 was mentioned many times throughout the show.

So, what gives Dexter: New Blood?


← Fringe Republicans Are Abandoning Not Just Trump, But Openly Rejecting Christianity | Review: Simon Rex Kicks Us Deep In The Crotch of Texas With Sean Baker's Fearless And Funny 'Red Rocket' →