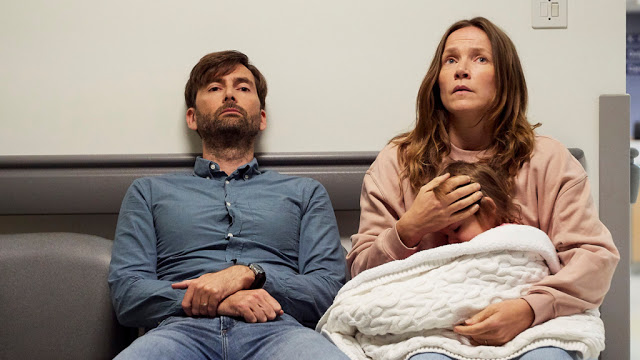 'There She Goes' Is a Brutally Honest, Painfully Funny Show About Parenting

I have three children. They are not angels, but I would not characterize them as particularly difficult, either. They are lovely, smart, and very strong-willed little humans, but they can be very loud, and — as most siblings do — they fight. It also takes 10 times more effort to compel a child to do a chore than it does to do the goddamn chore myself. However, they are rarely defiant, which is a small mercy, because it is impossible to parent defiance. When a kid’s sense of pride takes over — when they continue to misbehave even after you’ve given them time-outs (that they refuse to abide by), and even after you’ve taken away their devices until their college years — it feels impossible to parent. There are no tools left with which to tackle defiance (my parents, of course, had the belt and the switch, but even those were only marginally effective). Spending 15 minutes with a defiant, tantruming child is one of the most emotionally taxing experiences a parent can endure. It takes it all out of you.

There She Goes is a British comedy-drama based on the experiences of Shaun Pye (The Increasingly Poor Decisions of Todd Margaret ), whose daughter was born in 2006 with a chromosomal disorder (she still has no official diagnosis). The character of his daughter in There She Goes, Rosie Yates (played by Miley Locke), is non-verbal, and severely learning disabled. She spends much of her day behaving defiantly and tantruming, at home, in the park, in restaurants and libraries. It proves to be an incredible challenge for her parents, Simon Yates (David Tenant) and Emily (Jessica Hynes), and it puts a massive strain on their marriage, on their jobs, on their ability to function as normal adults, or even as parents to their older son, the well-behaved Ben (Edan Hayhurst), whose entire life is overshadowed by his younger sister.

It’s a difficult show to watch, but there are a plenty of comedic moments to leaven the drama. Both Simon and Emily frequently make fun of themselves and try to find the humor in certain situations. In fact, my girlfriend in high school and college had a sister who was severely learning disabled, and while I sometimes found her parent’s sense of humor to be cruel, I understand that it was often the only coping mechanism they had at their disposal.

That’s very much the case in There She Goes: Sometimes the sense of humor can feel dark or even malicious, but it also feels necessary. The show would be unwatchable without it, and I suspect the ability of Emily and Simon to survive day-to-day would be likewise impossible. Indeed, to both its credit and its detriment, the series feels real, the sort of show that only someone who has gone through this experience could write. Even still, much of There She Goes feels relatable to even parents of children without special needs, only in lesser degrees.

David Tenant and Jessica Hynes are expectedly perfect here in a way that feels risky. They’re relatable, but they’re not necessarily likable, and it takes a special kind of performance to be relatable when you’re talking about leaving your family, or failing to connect to your child, or having emotional affairs with co-workers. It all feels brutally honest, but also, tremendously hopeful. As difficult and challenging as it is for Simon and Emily to raise a special needs child, there are small victories littered along the way. It’s also moments — when Rosie is able to articulate a want, or when Emily finally figures out a system for putting her to sleep — that make There She Goes almost impossible to stop watching. The show illustrates just how much mental and emotional energy it takes to raise a special needs child, but in its own way, There She Goes also successfully puts into perspective our own parenting challenges.

There She Goes is now airing its second season on Britbox. The season’s six-episode first season is also available on the streamer.