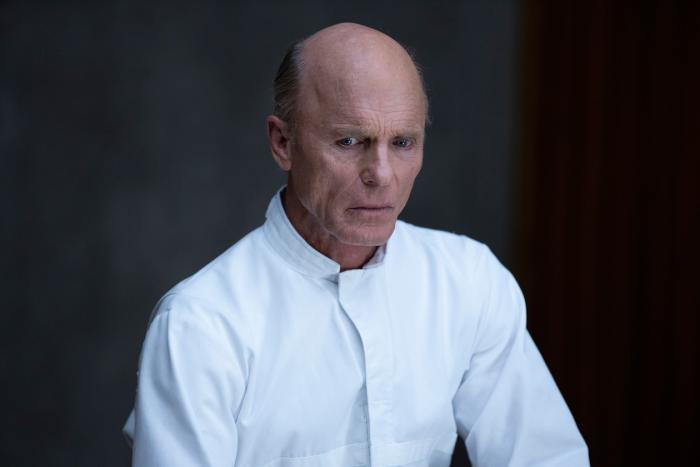 There Are No Heroes Or Villains In 'Westworld,' There Is Only ... Crispy Charlotte

OK, so maybe I sort of love Westworld again? I’m not sure if this week’s installment was quantifiably “better” than last week’s, but I did find it more enjoyable. I mean, don’t get me wrong — the plot is still about as clear as fog on a cold morning. It’s just that despite the overarching nonsense, the show stumbled into a few very fun scenarios. Namely: The Council of Williams, and Crispy Charlotte.

William, Meet William & William & William & William
William’s self-group therapy session is peak Westworld to me. It’s LOADED WITH PLOT IMPORTANCE, and it’s fun, and never the twain shall meet. William, you’ll recall, was injected with something and committed to an asylum by Charlotte-Dolores. Based on what we’ve subsequently learned, it’s pretty much a given that William has actually been handed over to one of Serac’s re-education centers, and the “AR Therapy” he’s undergoing is something that Cal was subjected to in the past (we saw a glimpse of him wearing similar goggles in a flashback last week). That injection is explained this week: it’s a protein tracker, which gives Charlotte-Dolores a bead on William’s location, and by extension the location of Serac’s secret facility, and allows her to… deploy Bernard and Stubbs to fetch him? I guess? Let’s just hand-wave over how those two managed to turn up in Mexico at the precise right moment.

All of that may be why William’s story was important this week, but it’s not why it was entertaining. No, what made William’s story entertaining was the way he found inner peace by beating the sh*t out of himself. His AR Therapy session featured a number of returning faces (Papa Delos as the therapist! Jonathan Tucker/Major Craddock as… an orderly or whatever!), and the conceit was that William had to deal with his daughter-killing guilt by confronting his past selves: William-as-a-boy, Younger William (Jimmi Simpson!), Tuxedo William, and Man-In-Black William. The question, as always, is whether William is responsible for his “dark urges” (the violence he unleashed inside West World). If he’d never met Dolores, or pursued The Game, would he have become so twisted? The first reveal is that yeah, actually, he used to beat the snot out of bullies as a kid, so Delos didn’t make him violent. But that leads him into another logical loop: If he was always violent, then isn’t the outcome inevitable? Did his life happen or did he choose it? The answer, of course, is one that we’ve heard before: “If you can’t tell, does it matter?”

(Yes, the line is a callback to the first season of Westworld, and specifically to William’s first journey into the park, but was I the only one who thought the line was basically referencing ALL of the Devs finale? Shoutout to unintended coincidences!)

Anyway, cue brawl where Institutionalized William beats the crap out of the rest of the Council of Williams because — and try to follow this logic — he’s realized that the past doesn’t matter and his purpose is to be the “good guy”? On one hand, William is giving therapy a real bad rap here, but on the other hand this is very much in keeping with his character. Rather than facing these painful revelations and taking responsibility for his actions (he killed his daughter in cold blood!), he instead submits himself to another fictional framework in which he’s just playing a role. Is this really all that different from the 30 years he spent vacationing in West World, playing the villain?

Speaking Of Heroes And Villains
I appreciated that William’s conclusion is the perfect counterpoint to that other big meeting of the minds that happened this week: Maeve’s confrontation with a past version of Dolores. Again, the reason for their meeting is pretty meh (Serac uploaded this Dolores to give Maeve experience killing her supposed adversary in the safety of the World War World simulation), but the scene itself is electric. Maeve refuses to blindly follow orders, and instead tries to pick Dolores’s brain for insight into what her real world counterparts might be planning. The problem is that even in this simulation, the women quickly arrive at an impasse: Maeve can’t trust Dolores with the keys to Host Heaven, and Dolores won’t hand them over to Maeve because Maeve is under Serac’s thumb. Both women have accrued more power than any individual should have, and neither is exactly sure what the other aims to do with all that power. In that lack of trust, however, there is a sort of symmetry. They agree that they are neither saints nor villains, but “survivors”. Yes, the robots created to perform their prescribed stories know they aren’t cut out for such roles — meanwhile William, a human, can’t help but try and shove himself into one again and again.

Sadly, Dolores’s predictions for what her real-world versions might be planning turns out to be correct, and Charlotte-Dolores disrupts the resurrection of Hector by destroying his pearl. He wasn’t the only host Maeve asked Serac to rebuild for her as an ally, and the others seem to have survived, but still: that one hurt.

Dolores Is Basically Elizabeth Warren
She’s always got a plan! She’s pulling all the strings! Except, maybe, her own…

Crispy Charlotte
Experience has changed the different copies of Dolores that she sent out into the world. Last week we saw that Connells-Dolores was still willing to die for the mission, but this week we see that Charlotte-Dolores is less willing to sacrifice herself for the cause. In fact, she has something to live for: Her son, and her ex (hi, Michael Ealy!). Serac outmaneuvers her last-ditch attempt to keep him from purchasing Delos, and when he arrives to seize his new purchase he’s got two orders for her: Destroy all data that isn’t the directly related to the guest profiles he’s been after this whole time and test all the staff to root out the Dolores copy he’s sure is hiding there. Charlotte-Dolores knows it’s only a matter of time before she’s discovered, so she attempts to secure a copy of the host data and complete all of Dolores’s other side missions (like following up on William’s tracker) as quickly as she can before escaping to her family. Unfortunately, her cover is blown sooner than expected, and she has to shoot her way out of Delos — and even then, it seems like she might have made it when she loads her family into an SUV and drives away.

Charlotte-Dolores emerges unseen from the wreckage, burnt and flaming and angry, and it is glorious. The question, of course, is who killed her family? Serac would make the most sense (the perpetrator looked like one of his henchmen), but I can’t shake the idea that Dolores arranged it herself. What if having a rogue emotionally-compromised copy of herself running around might have put her grander plans at risk? Worth considering. Either way, the act has forged a whole new version of Dolores to contend with. One who has nothing left to lose… and is kind of on fire. Seriously, it’s a good look. Very Terminator.

William’s Fingers
Just a quick reminder, in case you found yourself wondering why William was missing several fingers, only to have them back when he was in the AR session: He lost them when Dolores slipped a spent bullet into his pistol last season, causing it to blow up and injure his hand. I had to look it up myself, I had completely forgotten! Basically the episode used his hand as a way to signal if we were seeing him in reality or not, I think.