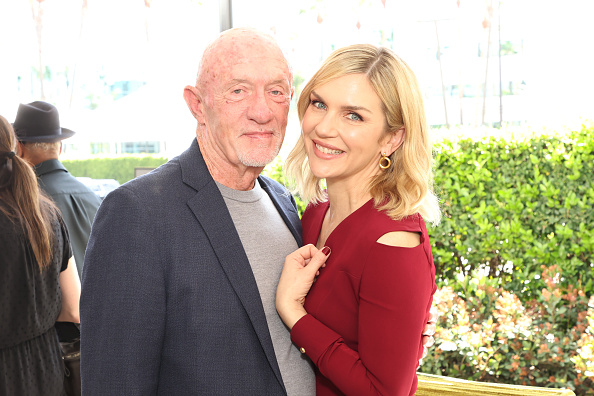 The Sweetest, Most Heartfelt, and Most Profane Emmy Nomination Reactions

I have read a lot of reactions to Emmy nominations from the television stars nominated over the last 24 hours, and they’re largely a combination of four words: “Honored,” “delighted,” “lucky,” and “thrilled.” There were a few, however, that were not of the same variety. These are those:

Rhea Seehorn on her first nomination after six brilliant seasons on Better Call Saul: “I was walking through the Borough Market with my beautiful fiancé Graham and the costume designer on Better Call Saul, Jennifer Bryan, because she’s here in London doing a show. We were hanging out together and we went over to American Bar at the Savoy Hotel because we heard it was beautiful and my fiancé looked over at me and he said, “Babe, you just got it.” And then the rest of the bar brought us over Champagne …

It’s incredible. It’s hard to take in; it’s hard to explain. You could be a great actor who’s not given great material to do, you could be an actor doing the best work of their life and no one’s watching it, you could be doing great work that critics love but fans don’t; or great work that fans love but the critics don’t — and to somehow get all of these things as a gift has not been lost on me. The fans’ acceptance of me, the critical acceptance of me and what the writers and the directors have given me as far as the growth of the character, and me being allowed to challenge myself, it’s amazing. People pulling for me, saying “she should be nominated,” is a bit surreal because you’re just like, “Gosh, I already got the brass ring.” But then when you have the academy and voters acknowledge you and say, “We want to give you a nod,” I won’t lie, that’s a lovely, special feeling that caused a little tearing up.”

“I don’t know Seth Meyers. I’ve been on his talk show once. But he got nominated, and he tweeted that he was more excited that I got nominated. I mean, if that doesn’t make you cry in the middle of the Savoy hotel, I don’t know what will.

This is an honor made all the sweeter by happening the same day @rheaseehorn got hers! https://t.co/1eV7FLDab7

Jennifer Coolidge on her first-ever Emmy nomination, for White Lotus: “It feels great! I thought I’d already lost. Someone told me that if you’re nominated someone calls you at 5:30 or 6 a.m. So, by 7 a.m., when it didn’t happen, I was like “OK. Oh well,” and sort of let it go. Then when I got a call from my publicist saying it had happened, I was so confused. But it’s even more thrilling. It’s really an incredible surprise … In a million years, I didn’t think this would happen. I just can’t believe it. Really seriously can’t believe it.”

Janelle James on her first for Abbott Elementary: “I didn’t need coffee today! I’m ecstatic. I wasn’t watching [the nominations announcement], but the phone let me know something really good or bad happened, and that many people don’t call you with bad news. The life of a comedian is to work in relative obscurity for a decade and then get everything at once, so this feels like the culmination of all the work I’ve been doing mostly for free and for drink tickets and a half sandwich.”

Sheryl Lee Ralph, likewise on her first for Abbott Elementary: “I am at a place that I have never experienced in my life. Wow, I am so happy, so thankful, so grateful. This is everything. I love what I do, I love being an actor, and I do it for the love, I don’t do it for the likes. I’m in Jamaica, and my son woke up early this morning to tell me and I almost fell off the bed. And I really realized what it means when people say “my phone blew up” because it literally blew up.”

Tyler James Williams again with his first for Abbott Elementary: “It’s an honor. It’s shocking to me — for a 13-episode midseason show on network TV, no one really expects us to do this well. I’m in L.A. right now — we started production Monday, so I’m in prep, just not as luxuriously as Sheryl! — and I was so excited for Sheryl and Janelle and Quinta that I didn’t even see mine. Someone had to tell me.”

Crying shaking and throwing up has new meaning to me because I real life did all three.

Still speechless. Congrats to the entire staff and cast of Abbott Elementary. And I want to share this moment with all of the people who watch and love the show. Emmy nominated, baby!

Bowen Yang on his second nomination in a row for SNL: [SNL] is the most wonderful convocation of talents and people and I share this with all the cast, writers, and crew. I was on a plane watching ‘The Real Housewives of Atlanta’ when I found out because I am a company man. Stream Peacock now.”

Steve Martin, who has five Emmy nominations but hasn’t won in 53 years, on his nomination for Only Murders in the Building: “Well, we’re thrilled. We’re thrilled at the nominations, not only for us but for the show. We’re dismayed that Selena was not nominated because she’s so crucial to our performances, really.”

Brett Goldstein, for his second nomination in a row for Ted Lasso: “Holy f—king f—k, this is f—king insane! For this to happen once is magic, but twice is a miracle. I’m so honoured to be included on this list of legends including two of my special Greyhounds! This is truly incredible. There has been so much love for this show and I feel unbelievably lucky to be a part of such a beautiful and talented team. What a ride. I don’t know what to say. I’m really trying to learn to swear less. Golly gee. Is that better? Ah, who the f—k am I kidding, thank you to the Academy. This is f—king amazing.”

Sidney Sweeney, who was nominated twice, for Euphoria and White Lotus:

Melanie Lynskey on her first nomination, for Yellowjackets: It feels very overwhelming and very exciting. I genuinely, in my heart did not expect this, so it’s pretty crazy … You know, at 45 years old, having done this for 30 years, it’s nice to feel relevant, I guess, without sounding too tragic. It was nice for all of us to be like, “Oh, wow. We’re part of something that people like, and people are talking about, and people want to talk to us about.” And certainly, I’m so thrilled for Christina for the Supporting nomination. I really cried when I saw she got nominated.”