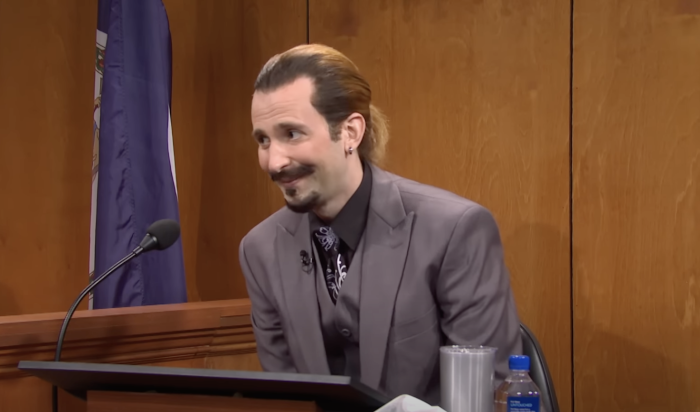 The Selena Gomez Hosted 'SNL' Features Steve Martin, Plus the Worst Cold Open of the Year

Cold Open — Drew Barrymore caught sh*t from the Internet a couple of weeks ago for making jokes about the Depp-Heard trial, so we’ll see how this goes, with the Cold Open zeroing in on the bed poop “because it’s fun.” There’s “video” of the staff finding the poop and reacting. This is getting a crap score, not because it’s mocking the Depp-Heard trial, but because it is terribly unfunny. It is the worst cold open of the season. (Watch Here) (Score: 1 out 10)

Selena Gomez — Gomez gives a nice monologue gently poking Steve Martin and Martin Short, and does a nice Miley Cyrus impression (and then there is a less effective gag about finding love among the cast members). (Score: 6 out of 10)

Bratz Dolls — A teenage girl gets advice about her parents’ divorce from her Bratz Dolls, who manifest themselves as real people and offer a lot of catty advice. “Be authentic, but be a bitch to your waiter.” Another bad skit. It’s going to be a long night. I think maybe Kyle Mooney wrote 60 percent of tonight’s show. (Watch Here) (Score: 3 out of 10)

Old Enough: Long Term Boyfriends — It’s a parody of that Japanese show where they send toddlers out to run errands, only here girlfriends send their thirty-something-year-old boyfriends out to run errands and they behave similarly. (Score: 5.5 out of 10)

A Storm Within — During a Broadway production, everyone has COVID and all the actors are understudies who haven’t had time to rehearse, and no one knows their lines and nobody can act and Selena does a hilariously bad Irish accent. There’s also a penis in the play, and the penis is the only reason anyone has come to watch. It’s a bad skit that is funnier than it has any right to be. (Score: 5.5 out of 10)

American Inventors — Steve Martin makes a cameo as the inventor of the whoopie cushion, which tells you the level of comedy in this episode. The inventor’s muse (Aidy Bryant) also gives him the idea for the hand buzzer, snakes in a can, etc., based on her own real-life experiences. Stupid as hell, but it’s pretty great. It’s also the Mat skit of the week! (Score: 7 out of 10)

Weekend Update — “Update” was going so well. Che and Jost were delivering decent jokes, there was good chemistry, and the punchlines were landing and then DAMNIT BLAMMO, Kyle Mooney’s Baby Yoda ruins everything. EVERYTHING. Is Baby Yoda the worst recurring character in SNL history? YES. Sarah Sherman also gives a tour of SNL based on what she’s learned so far this season, which is mostly an excuse to make fun of Jost, and that is always welcome. (Score: 7.5 out of 10, but only because I’m not holding Baby Yoda against the rest of “Update,” otherwise it would be in negative numbers)

The Three Daughters — A dragon slayer has to choose one of the king’s daughters to marry. The prince knows the setup and keeps expecting one of the daughters to be “weird,” but the weird one won’t reveal her weirdness. You know the joke is coming, but you don’t know what the joke is, and unfortunately, the joke is horribly anti-climactic. (Watch Here) (Score: 4 out of 10)

Baby Monitor —Parents leave their teenage daughter home alone to babysit their twin infants. Her friends, however, are obsessed with watching them on the baby monitor. Both Selena and Post-Malone break in this skit, which is bizarre as hell. (Score: 4.5 out of 10 for being so bizarre).