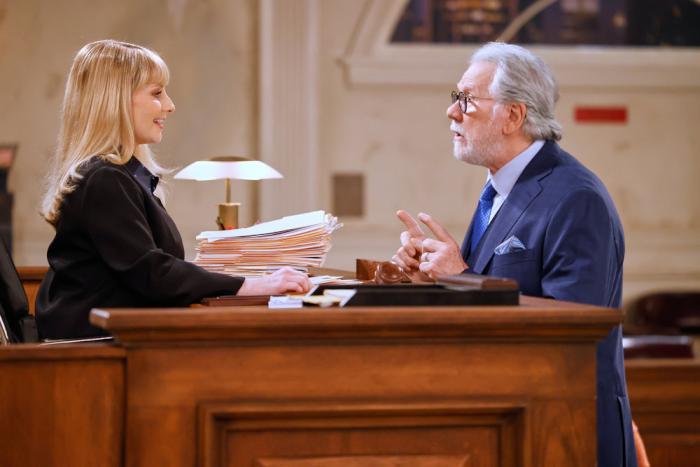 I loved Night Court growing up, and the new Night Court is a lot like the old Night Court. For better, and for worse. In the “for worse” category, the 2023 Night Court is a broad, laugh-track comedy and so was the original. But laugh-track comedies don’t play like they did in the ’80s and ’90s, when it was the mainstream format. Here, it feels more like a throwback, and while there’s plenty of nostalgia value in it, I’m not sure what viewers new to the sitcom might think.

Melissa Rauch, who plays Judge Stone — the daughter of the Judge Stone played by Harry Anderson in the original — has much of the same spirit as her predecessor: A streak of humanity in the bowels of a court system where most of the cases involve public urination, lewd behavior, and petty theft. But Rauch comes more from the Leslie Knope school of character. While that may be more suitable to 2023, it doesn’t leave as much room for the sometimes pitch-black comedy that underlay the jokes in the original series where, for instance, the prosecutor might have chosen between having sex with a much older woman or slashing his wrist, or where a prosecutor often belittled and took advantage of his underprivileged clients.

There are ways that it’s not the same, too. It’s missing Harry Anderson’s drollness, Marsha Warfield’s deadpan, and the teddy-bear qualities of Richard Moll. The supporting characters in the 2023 version, so far, are instead broad caricatures, particularly Lacretta’s bailiff character, and Dimiter D. Marinov’s Eastern European stereotype as the custodian. At least India de Beaufort — who plays the Markie Post equivalent, in this case, a prosecutor — has the potential to successfully follow in Post’s footsteps.

But what both versions of the show have, and what made the old version as successful as it was, is John Laroquette, who is as talented a sitcom actor as they come. Laroquette won four consecutive Emmys in the role in the ’80s — back when his competition was mostly supporting characters on Cheers — because Laroquette has a keen ability to deliver broad jokes and play a prickly degenerate with just enough humanity to make him not only the funniest guy in the courtroom but one of the most likable. He brings every ounce of that back in the 2023 iteration of his Dan Fielding character — now a public defender — and it is as impressive now as it was then, maybe more so because Laroquette can sometimes make you forget you’re watching a laugh-track comedy. The man has a gift; he’s like the male Julia Louis-Dreyfus. He’s funny, but there’s some tragic Shakespearean stage actor energy underlying his performance. I didn’t appreciate it as much in the ’80s, but he is tremendous. To the extent the new Night Court succeeds, it will be in large part because of Laroquette and the chemistry he and Rauch already exhibit after two episodes.

It is not a great sitcom, but neither really was the original. But like the original, it should be fun to watch, Rauch will elicit a lot of affection, and Laroquette may occasionally bring moments of greatness to it. For a network sitcom in 2023, that’s more than good enough.