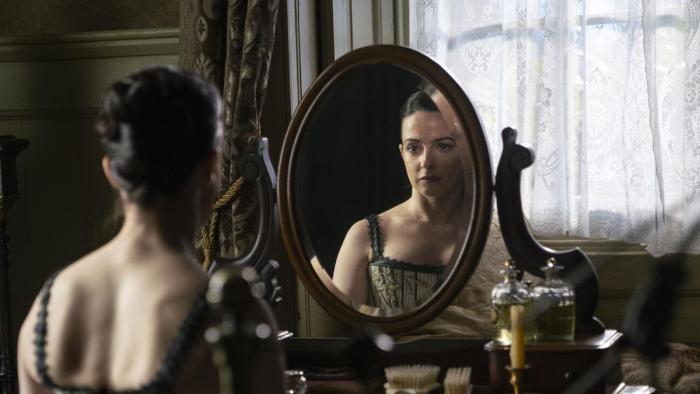 Through three episodes now, I’ve become smitten with many of the characters on HBO’s The Nevers; the production design is impressive as hell; the cinematography and the costumes are out of this world; and in this week’s episode, we were witness to one of the most imaginative and breathtaking action sequences I’ve ever seen on television.

But I still don’t really know what the hell is happening on The Nevers. What’s the mystery? What are the motivations? Where is it going?

I thought Mary Bright was going to be something akin to the season-long MacGuffin, a human prop the various sides fought over because Mary Bright somehow held the key to the future of The Touched. But Whedon is Whedon, and though he’s only around for four or five episodes, he made for goddamn sure to unexpectedly kill off a character just as we were getting to know her. Better now than after we’d completely invested, I suppose, but Bright’s death leaves the show in even murkier territory. The path of the story has not yet availed itself because the motivations of others still remain so shrouded in secrecy.

Take Amalia True, for instance. She’s dead set on expanding St. Romaulda’s Orphanage, presumably because there is power in numbers, but even Mary Bright is suspicious of Amalia’s motives. Why shouldn’t she be? Amalia is connected to Maladie in the past; she was on her way out of this astral plane when she was Touched three years ago; we also know that she has a history of drinking, fighting, and carousing with other men, including one Dr. Cousens, with whom Amalia had an aborted affair that still haunts his marriage. Cousens also has a healing Touch, which he uses on Maladie because of the Hippocratic Oath and all. Although I suspect that the scene between Dr. Cousens and Maladie exists primarily to introduce Chekhov’s Healing Touch, should someone need to be brought back from the brink of death later on.

Mary has reason to be skeptical of Amalia’s motives, especially after Amalia tries to convince Bonfire Annie — a free agent now, having severed her relationship with Maladie — to move into the orphanage. Apparently, Amalia isn’t picky about her allies. Annie, however, is far more interested in breaking up the Beggar King’s racket, although her attempt to do so leads to a big dust cloud of the Beggar King’s opium product, which inspires Penance Adair — high on Aunt Emma — to invent a sound amplifier, which later allows Mary Bright to sing her song for all of London to hear.

In the meantime, however, Amalia has to convince Mary to get over her skepticism and sing! that! song! Amalia does so by interrogating one of Dr. Hague’s people, who reveals that she drowned her own daughter because she was Touched. This is the kind of bigotry the Touched face out in the world on their own, Amalia illustrates, which is enough to convince Mary to use the power of her song to beckon others who have been Touched to the orphanage. Maybe there really is power in numbers.

Before we get there, though, Amalia spills everything to Lavinia Bidlow, including Dr. Hague’s `underground abduction ring, which Lavinia already knew about, because she is funding it. It also means that Lavinia is well aware of Mary’s plan to sing for The Touched, so that when Mary finally does — and she’s gunned down by Mr. Machine Gun Arm — Lavinia is suspect #1. Is she in cahoots with Maladie, too? Or did Lavinia hire Machine Gun Arm on her own? Or did someone else hire Machine Gun Arm?

The list of other suspects, so far, is limited. Could it be Lord Massen, the sourpuss who continues to grieve his wife and daughter, even though there’s something in his basement who could very well be his daughter despite the grave markers? (We know from the pilot that Massen’s daughter was Touched).

Could it be the Beggar King himself, who did try to have Amalia killed by sending one of his goons who could walk on water to kill her? Plotwise, the sequence didn’t add much to the story — except to establish that Amalia and the Beggar King are now foes — but wow! It was intense and terrifying and one of the coolest underwater sequences I’ve ever seen.

Or could it be Hugo Swann, who does have a motive, after all? He’s super sketchy — he auditions both men and women for his brothel — but he’s also trying to hoard the Touched for himself, and if Amalia lures them all away to her orphanage, he’d have fewer sex workers for the brothel to which he’s attached Augie Bidlow’s good reputation against Augie’s better wishes.

It’s worth mentioning one other possibility, although this one can be filed under The Nevers theories: Inspector Frank Mundi. Why would he want Mary killed? She did leave him at the altar, and while she doesn’t feel threatened by Mundi, isn’t that all the more reason to suspect him? Also, why did he insist on being there when she sang, even though he could not hear it? Let us also not rule out Mundi’s connection to Hugo Swan, with whom Mundi is in bed both literally and figuratively.

It still blows my mind that Mundi is played by Ben Chaplin, but he also gives me a strong Doc Holliday from Wynonna Earp vibe, which may be the show’s way of intentionally obscuring what a bad guy Mundi actually is.

Any way you look at it, the problem so far with The Nevers is, as Donald Rumsfeld once so eloquently put it: “We know there are known unknowns; that is to say we know there are some things we do not know.” Right now, there are too many known unknowns to make heads or tails of where The Nevers is headed. What’s Lavinia Bidlow’s end game? What is Amalia hiding about her past? What’s Lord Massen’s role in all of this? Is Hugo Swan just a shitty dude, or does he have a bigger play? Is the Beggar King more than just a disrupter? The wild card, meanwhile, remains Frank Mundi.


← 'For All Mankind' Season Two Finale Review | 'Roadrunner: A Film About Anthony Bourdain' Will Look Back at a Legend →