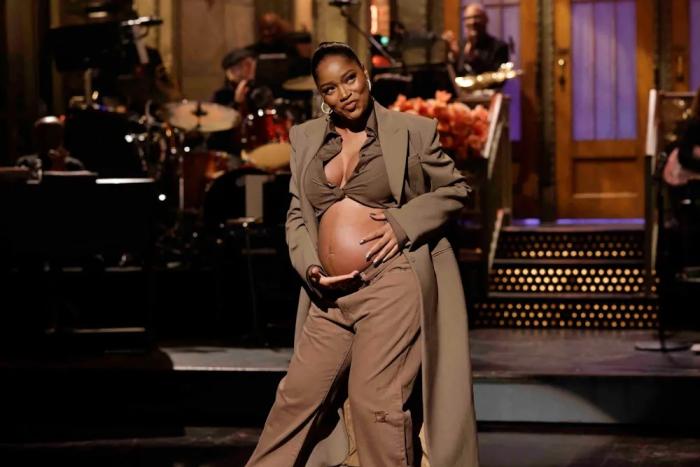 Cold Open — A few Senators (including Mitch McConnell) have a conversation with Herschel Walker ahead of the run-off. It’s basically just a lot of dumb jokes — jokes about how dumb Walker is — that are far more endearing coming from Thompson than Herschel himself. In the end, the Senators agree to lock him in McConnell’s panic room until election day. Again, the problem with Kenan playing Herschel Walker is that it makes me forget how much I dislike Herschel Walker. It’s also a lame sketch. (Watch Here) (Score: 3 out of 10)


Soap Channel — It’s a parody of an ’80s soap opera and we don’t know what the joke was until Keke Palmer and Cecily Strong start fighting and the stunt doubles get involved. It’s spectacular. (Score: 7 out of 10)


Big Boys — Keke and SZA perform a song about needing a “Big Boy” during the winter months and rejecting fit dudes in favor of the warmth a big guy gives them. It’s basically a bunch of fat jokes, but they’re endearing. (Score: 6.5 out of 10)


United Tingz of Aubrey — A large group of women who are referenced in Drake songs band together to unionize as Tingz. And no, Keke is not that Keke. (This will get two scores, because the sketch is much funnier if you actually know Drake lyrics). (Score: 5/7 out of 10)


Hello Kitty Store Orientation — During an orientation with employees, they learn that Hello Kitty is a real human girl, and two of the employees are appalled. “If I had a baby who looked like Hello Kitty, I would throw it back.” And then things get really weird, and Natasha Lyonne shows up, and things get really New Yorker patriotic. It’s both funny and nonsensical. (Score: 6.5 out of 10)


Kenan and Kelly — Keke Palmer comes to Kenan and suggests a reboot of Kenan and Kel called Kenan and Kelly starring Keke, who is using the Nickolodeon show to gun for an Emmy award. Lots of good stuff here, notably seeing Kenan as his ’90s character again, Keke’s dramatic monologues, and Kel himself making a very dramatic appearance. (Score: 9 out of 10)


Arby’s Ad — Various characters question how it’s possible that Arby’s can sell 5 roast beef sandwiches for $10. “Arby’s is a for-profit business, right? Because I can’t make 5 roast beef sandwiches at home for $10. Where are you getting all this roast beef? And what kind of meat is it?” And then a cheap Taco Bell gets involved, and Kenan does a Ving Rhames impression. It’s gloriously insane. (Score: 8 out of 10)


Weekend Update — Che and Jost do some good work with a lot of jokes about Kanye, and there are a few groaners, too (even Jost contributes a couple), and then Michael Longfellow talks about the perks of being a child of divorce. Sarah Sherman — as the President of the Peppa the Pig Fan Club — is very upset that a same-sex couple is being added to the show. “It’s cute until THEY ANALLY ENTER EACH OTHER.” Sarah Sherman is a gem, and her segment also gets the Mat sketch of the week, the first time an “Update” segment has been named as such. (Score: 8 out of 10)


Ultrasound — Keke’s baby bump makes an appearance, and we find full-grown adults on her ultrasound breakdancing and smoking. It’s not a particularly good skit — too much Mooney energy — but the cigarette smoke coming out of Keke’s undercarriage is funny. They can’t all be winners. (Watch Here) (Score: 3.5 out of 10)

Choir Practice — Keke’s character transfers to the school and poses a challenge for the choir solo. It’s not a great skit, but Keke does get to show off her voice. (Watch Here) (Score: 4 out of 10)

Flight Attendants — Keke and Ego play flight attendants celebrating the fact that the plane has flown 10 million miles. “It’s not just a lot. It’s illegal!” (Watch Here) (Score: 2.5 out of 10)