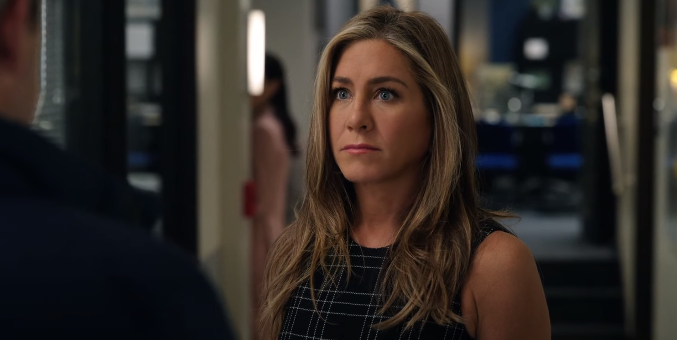 It has been a deeply weird season of The Morning Show, and not just because of the melodramatic soap storylines or the bizarre death of a main character. I’m sure it has to do with COVID protocols and not because the two leads don’t get along, but it’s remarkable how little screentime that Jennifer Aniston and Reese Witherspoon shared this season. Aniston’s Alex Levy spent almost the entire season away from The Morning Show studio and, instead, in hotel rooms, her apartment, in an Italian villa, most often with only one or two other characters, and away from the morning show that is the very subject of the series.

The result has been an inconsistent season, at best, one where they spent all 10 episodes trying to pick up the pieces from last season only to end in a place where it feels like “The Morning Show” is as broken as it’s ever been. Alex Levy left after last season only to be pulled back in, except that she only did a handful of episodes of the show before she has another meltdown, flies to Italy to talk to Steve Carell’s Mitch Kessler, comes back, and delivers a mea culpa at a dinner party while admitting that she slept with the resident sexual harasser. iPhone footage of the speech leaks, and Levy is “canceled.” The season ends, however, with Alex Levy pulling a Chris Cuomo and sharing her experiences with the symptoms of COVID on a new streaming network that had its launch canceled on Tom-and-Rita Day. “I am done apologizing for myself. Either get on the Alex Levy train or just stay at the station,” she tells her audience.

I think that Levy’s brutal on-camera honesty about her illness, the string of profanities, and the delirious pushback she put up to her own backlash is meant to illustrate that Alex has been redeemed. The series substitutes an illness for contrition — Alex has COVID and she’s in agony, so let’s ignore all the horrible things she’s done and forgive her! — but like last year’s finale, this one ends on an ambiguous note that next season will probably paper over again with another big-time jump.

At least Chip and Alex are friends again, although Chip’s engagement to Madeleine (played by Duplass’ real-life wife, Katie Aselton) may be in danger since Chip specifically and stupidly puts himself at risk for COVID by going over to Alex’s apartment while she is infected without informing his fiance. But, again, that’s something we’ll have to wait until next season to find out about, assuming that Apple+ picks it up another year (I’m sure they will).

Meanwhile, Reese Witherspoon’s Bradley doesn’t spend that much time this season dealing with the specifics of her job, either. Her character is dating another television journalist character played by Julianna Margulies — who doesn’t even appear in the finale — while dealing with her drug-addicted brother, Hal, which feels almost like a tacked-on storyline to give Bradley something else to do while Alex manages the various things that kept her off-camera this season. The kicker to that storyline, however, is that Cory Ellison (Billy Crudup) — while helping Bradley find her missing brother — confesses that he loves Bradley, which is extremely out of character for Cory, even during a pandemic. Bradley doesn’t respond to the confession because she’s called away by a convenient phone call telling her that her brother is in the E.R., meaning that storyline will dangle, too. She does find her brother, however, after pulling a sort of “You know who I am” Reese Witherspoon move and ignoring the demands of an E.R. unit and barging in anyway during a pandemic.

The subplot where the public tries to cancel weather man Yanko Flores (Nestor Carbonell) because he used the phrase “spirit animal” during a weather report also fizzed into nothing, while the storyline of producer Mia Jordan (Karen Pittman) ends about where it ended last season: With her holding the bag while “The Morning Show” falls apart around her. It was a strange season where they seem to want to make “cancel culture” a big theme, but they failed to really say anything about it.

The only certainty of the season — at least for now — is that Daniel Henderson (Desean Terry) finally wised up and quit instead of stepping allowing himself to be taken advantage by the show, which only seems to appreciate him when no one else is available. I am guessing, however, that the series finds a way to bring him back, if only as a rival to Alex and Bradley (and hopefully one who bests them in the ratings).

Ultimately, it was a mess of a season, one where — aside from killing off Mitch Kessler — the series didn’t advance the story much. It ended in a place similar to where last season ended, with Alex Levy on the verge of being kicked to the curb and Bradley adrift. Maybe the biggest problem with the season, however, is that it did nothing to make us care more about Alex and Bradley beyond the fact that they’re played by Jennifer Aniston and Reese Witherspoon. The series spent all season tearing Alex down and expecting us to buy back into the character because she got COVID, while Bradley lost a lot of the chutzpah that characterized her first season role. Beyond vying for the role of moderator at a Presidential debate, the show allowed Bradley’s love life and her problems with her brother to get in the way of her ambition. She also lost her fish-out-of-water underdog status, her role as the fresh-voiced tell-it-like-it-is journalist. This season was mostly spent being glum about other people’s problems and worried about (gasp!) revealing that she’s bisexual.

Still, as beset by problems as it is, it was a very watchable season.