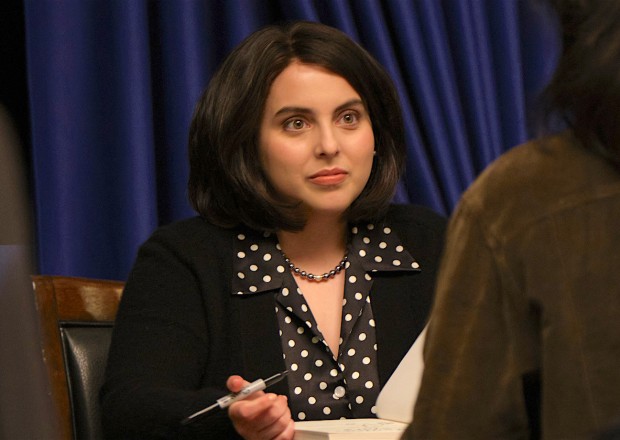 The 'Impeachment: American Crime Story' Finale Lands with a Thud

It might be an understatement to say that Impeachment: American Crime Story fizzled in the end. I thought I’d nodded off and missed the last minutes of the finale, so I rewound it to watch again only to watch the same wan epilogue to the events of the last 10 episodes: Linda Tripp trying out some brutal honestly with a magazine reporter over dinner in an effort to rehabilitate her image, while Monica Lewinsky took a moment away from a chaotic book signing to collect herself and remind herself that she was all right.

The final episode, like the Impeachment trial itself, was anti-climactic, in part because it doesn’t even bother to cover the impeachment trial. The last we see of Bill Clinton in the episode is when the House approves an Article of Impeachment against him while he depicts himself as a victim. Before that, it’s mostly a harried sequence of reactions to Ken Starr’s report: Ann Coulter delightfully wallowing in the filth of the report; an angry Matt Drudge exploding because his site went down; Chelsea reading the report; Bill Clinton urging his staff to make the argument that the report was “too personal,” laying the groundwork for it to blow up in the face of Republicans; a friend of Monica’s doing what friends do — razzing her over the cigar.

We also see Paula Jones, more of a casualty of this situation than anything. She’s living with her mother, reluctantly accepting an offer to appear nude in Penthouse because she needed the money. The Republicans used her up and spit her out when she was no longer useful to them. Juanita Broderick gives an interview to NBC revealing that Clinton had raped her, although that revelation is pushed aside by the impeachment news cycle, rendered a footnote in the whole episode.

Linda Tripp got plastic surgery to look more like Sarah Paulson but otherwise faded into obscurity. She was indicted for secretly recording Lewinsky, but the charges were dropped because the court ruled that Lewinsky — having lied previously under oath — was not a credible witness. (She did receive a federal settlement from the government in 2003, and passed away after a battle with cancer in 2010).

Monica would get her redemption, but not until the #MeToo era resurfaced and reframed the story, none of which is depicted in Impeachment beyond the fact that the series itself, for which she consulted on every episode, is its own form of redemption.

The abhorrent Anne Coulter, in a conversation with Drudge, captures the sentiment of those days after the Article of Impeachment passed better than anyone, save for the insults directed at Hillary: “The sitting President of the United States is a felon. We exposed him … but if he ran for a third term today, he’d win. Hillary — a walking void of charisma, a sentient bag of ice chips — is so popular right now that she’s going to be in the Senate. We showed this country exactly who they are, and they said, ‘Yes, please. Can we have some more?’”

As someone earlier in the episode said, men in sex scandals always get a second chance. Women? Not so much.

There is some irony to the anti-climactic nature of the finale, mostly in that everything that came before it was mostly underwhelming. There was little here we didn’t already know. It was a rehash of those events, and though it was recontextualized from Lewinsky’s perspective, most of the people inclined to watch Impeachment had probably already recontextualized it themselves. It took me a while to adjust to Beanie Feldstein as Monica, but she grew into the role. The rest of the performances were good, too: Sarah Paulson was suitably monstrous and “misunderstood” as Tripp; Clive Owen brought in the villain buried beneath Bill’s charisma; Edie Falco’s Hillary was terrific, but the character gets short shrift in the series; Cobie Smulders was a deliciously evil Ann Coulter, and if anything, it was good to see Mira Sorvino on our screens again (she played Monica’s mother). In the end, though, I don’t think that the series changed our minds about any of the participants save for maybe Annaleigh Ashford’s Paula Jones.

I don’t know how widely viewed Impeachment was, either, but I suspect it might have gained a bigger audience with a Hulu streaming audience. Maybe. Then again, it never gained cultural traction the way The People vs. OJ Simpson did. It’s wasn’t nearly as good, for one. For another, though one participant was obviously in a greater position of power, Impeachment was mostly about the illicit private lives of two consensual adults. As the country illustrated in 1998 (and apparently again in 2016), we don’t really care that much about the private lives of politicians, and that’s probably even more true today than it was in the ’90s. Republicans overplayed their hands during the Clinton impeachment scandal, and so apparently did Ryan Murphy in overestimating our collective interests in the sordid details of Clinton’s sex life.

← Review: Brazilian Drama '7 Prisoners' Reveals the Inescapable Hell of Poverty | The Fate of Hannah on 'Dexter' Has Been Revealed →