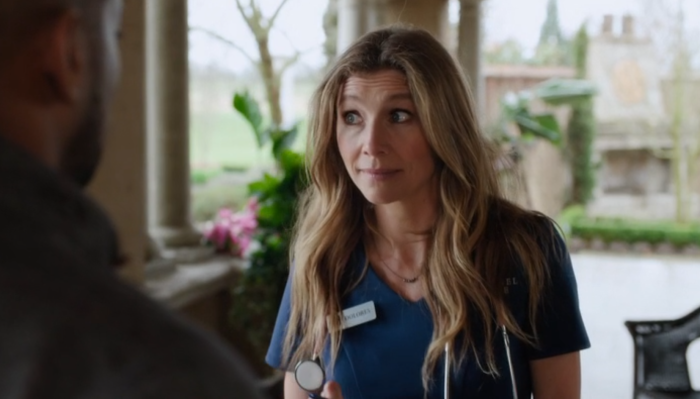 Psych 2: Lassie Come Home debuted today on Peacock, the new NBC/Universal streaming network. The second Psych movie is essentially a love letter to Timothy Omundson, who plays Lassiter, and who had to be written out of the first Psych movie because the actor suffered a massive stroke from which he is still recovering. In Lassie Come Home, Lassiter’s character in some ways mirrors that of Omundson’s real-life situation: Lassiter was shot six times and suffers a stroke while doctors were performing surgery.

Here, Lassiter is recovering from the stroke, which allows Omundson to spend most of his time either in bed or in a wheelchair, as the movie also pays homage to Hitchcock’s Rear Window while also reversing the dynamic between Lassiter and Shawn (James Roday Rodriguez). Lassiter typically plays the straight man who has to be convinced of Shawn’s (psychic) visions, but here, it’s Shawn and Gus (Hill) who are disbelieving of Lassiter’s visions about ghosts in his convalescent home, which is overseen by a Dr. Hirsch, played by Richard Schiff.

I won’t say much else, except to say that the whole gang is back, even if only briefly in the case of a few characters (Kirsten Nelson, for instance, and MAGA-loving Kristy Swanson, who makes a very brief cameo as Lassiter’s wife). It’s good see Shawn and Gus together again, and the movie immediately falls back into its comfortable pattern. Despite the time apart, Roday Rodriguez and Hill pick up right where they left off, and the names that Shawn comes up for Gus never get old (“My name is Shawn Spencer, and this is my partner, Bill Poopingtons .. All the Pips in One … Ding Dong Ditch”). There’s also a few other fun cameos, including one from Joel McHale (who plays Lassiter’s Dad) and Jimmi Simpson, who returns as Mary Lightly.

Psych has also always been very good about its pop-culture references, and I have to give a shout out to one particular cameo from Allison Miller, who plays Maggie, Roday Rodriquez’s love interest in A Million Little Things, and who bears a striking resemblance to Maggie Lawson, who plays Shawn’s wife in Psych. Allison Miller plays the owner of a cat-feteria (don’t ask), housed in the old Psych office, which is being sublet by Shawn’s Dad, Henry (Corbin Bernsen) to hipster pop-up joints. In fact, the second best joke in the movie is when Shawn expresses annoyance with his father for watching This Is Us. “Dad, why are you watching This Is Us?” he asks. “They have the same show on ABC, but newer!” The joke, obviously, is a nod to A Million Little Things, which stars Roday Rodriguez and Allison Miller, but also, it should be noted that Omundson has been recurring on This Is Us, so there are layers of meta here.

My favorite little Easter egg, however, comes earlier on in the movie. I am a huge fan of both Scrubs and Psych, and the two are obviously familiar with the similar dynamics between the two leading pairs. On the Scrubs rewatch podcast, in fact, Zach Braff has even mentioned a desire to make periodic Scrubs movies modeled after the success of the Psych movies, and just last week, Donald Faison conceded that Dulé Hill would have made a terrific Christopher Turk (he also said that Jaleel White and Damon Wayans Jr. would have made terrific Turks, as well).

Anyway, enter Sarah Chalke, who played Elliot Reid in Scrubs for eight seasons (and some change), and who — in Psych 2 — plays a nurse working in the convalescent home in where Lassiter has been admitted. She quickly develops a crush on Gus, and in the best pop-culture reference in the movie, Chalke’s nurse says to Gus and Shawn, skeptically: “I know this goofy little white guy, sexy black dude routine the two of you got going like the back of my scrubs.”

No one ever said that Psych’s pop-culture references weren’t obvious. Still, I laughed, rewound it, and laughed again. I am the precise target audience for this joke.


← Book Review: Lindsay Ellis Brings Aliens to the Near Past in Her Sci-Fi Debut 'Axiom's End' | 5 Shows After Dark: 'United We Fall' Premiere ABC, 'The Challente' on MTV 35th Season Finale →