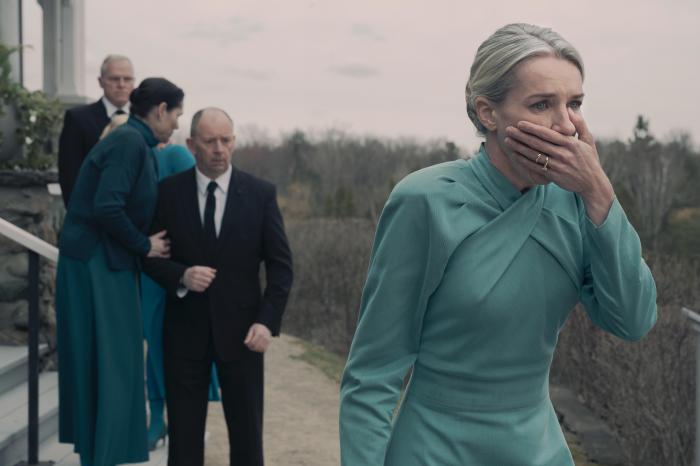 ‘The Handmaid’s Tale’ Recap: I Never Thought Leopards Would Eat MY Face!

Previously, on The Handmaid’s Tale: June and Luke went on an eventful stroll in the woods of No Man’s Land, made a new wee buddy, got some intel on Hannah, and then got captured by unknown baddies. Serena didn’t see the net slowly closing around her in her special safe house, and she’s run out of pals to come and save her. Here’s my recap for episode 5 if you missed it!

This week: Y’all… Serena’s finally figured it out. She is not pleased. And she’s not going to take it lying down. Meanwhile, in Gilead, Lydia is gunning for Creepy Warren’s blood. Spoilers are ahead, so without further ado let’s dive into episode 6, aka “I never thought leopards would eat MY face,” sobs woman who voted for the Leopards Eating People’s Faces Party.

Still grappling with the ramifications of her recent epiphany, Aunt Lydia is at the hospital awaiting news of Esther. Having tried to kill herself and Janine, Esther’s not Lydia’s favourite person, though Janine has urged Lydia to show compassion. Thus far, this involves a plan to sterilise Esther. Hmmm, not sure that’s what Janine meant. However, the procedure has been postponed due to a shocking development: when Creepy Warren demanded to be left alone with her at Fred’s funeral, he raped her and she became pregnant. Lydia is horrified, and if we’re grading on a very generous curve, her conversation with Esther is quite … sympathetic? Some of her questions admittedly cross a big line, but if we remember the HER FAULT, HER FAULT chanting from the Red Center of yore, she’s miles away from that now: “There is nothing to be ashamed of”. Lydia believes her — and vows to do something about it. This is huge! GET HIM, LYDIA! Yes, yes, yes, of course, she is a massive hypocrite as she sends her charges off to ‘serve’ in the Ceremony, but this is progress and I am here for it. GET THEM ALL.

She presents her case to Lawrence, who responds with a hearty shrug. LAWRENCE IS NOT YOUR FRIEND. He just sees Warren’s crime as ‘jumping the gun’. “Watch your tone,” he warns Lydia. Her eyes narrow. GET HIM, LYDIA.

Lawrence even toasts Creepy Warren for his ‘achievement’, until he reveals he’s killed Lawrence’s master plan for New Bethlehem, and gets in a few digs at Lawrence’s lack of reproductive prowess. Suddenly, action against Creepy Warren becomes convenient for Lawrence and he has this useful nugget of information from Lydia to justify it. He waits to strike until the Putnams are out to breakfast. Poor Naomi has no idea that Creepy Warren has been up to his old creepy tricks again, and she finds out in the most dramatic way when Guardians bundle Warren out of the restaurant to deliver him to his impromptu sentencing. It’s a bullet in the head for Warren, delivered by … wait for it … NICK. I was going to give him credit for this, but come on, he’s just following an order. Let’s see what happens if he’s asked to shoot someone he doesn’t find completely gross. That’s a real test.

Mrs Blaine, sporting a growing bump of her own, wonders what Nick is becoming. Sorry to break it to you, Rose, but Nick’s becoming what he always was. He wants to make “Gilead a safer place” for their child, when he should be burning it to the ground. Nick got into all this because he was groomed by a terrorist, became one himself and then did well from it until he started to find it icky, at which point he feathered his nest some more and stayed anyway. He’s had ample opportunity to escape; sure, there’s the pesky issue that the America he betrayed might bear a grudge and he might face treason and terrorism charges, but Tuello wants him to flip and Tuello’s made deals with worse monsters than Nick.

OK, fine, I will give him a little credit. Shooting Warren is the most exciting only thing he’s done in ages, and Warren had it coming.

Lydia takes her Handmaids on a cathartic field trip to see Warren’s body on the Wall. Has Lawrence sold this to her as him doing her a favour? Will this be a new alliance, with Lydia feeding Lawrence intel on terrible Commanders (HINT: It’s all of them) so that he has viable excuses to have them killed? If so, things are going to get interesting.

Whilst Luke is having a normal panicked reaction to being captured by armed scary dudes, June is remarkably calm. It’s not her first time. She figures out quite quickly that these are not Gileadeans, but something else, some faceless militia operating in No Man’s Land, picking up runaways and escapees and deciding which nation to take them to. They have picked up a valuable captive in June, aka Public Enemy Number 1.

I love the scenes with June and Luke here, with all the fear, bickering, ranting, and sweetness spilling out everywhere. Luke’s terror for their circumstances and his horror about what it means that June isn’t panicking as much, is almost refreshingly normal compared to scenes from episodes past, where we just had lots of extreme close-ups. There are even moments of lightness to balance it out: “How’s your butt?” But that dread never fully goes away. June has plot armour; Luke doesn’t.

When the Goons come to take June’s fingerprints, she tells them to talk to Lawrence or Nick, presumably so that they can help her out. LOLOL. That’s faith for you. Luke tries a little escape move of his own and gets soundly beaten for it.

At least this time they get to say goodbye, reasons Luke. June snaps him out of that, with a pep talk through the bars.

“Last time, when we were apart, no matter what happened, I never gave up hope. And you never gave up hope, because we knew, we just knew, that we would find each other again. So we’re just going to do that again, right?”

Moments later, they are separated, dragged to different vehicles. Luke is going to be dropped off “at the border” but which one? On June’s bus are lots of Gileadeans, so it looks like she’s on the Gilead Express and he’s on the road to Canada, but thanks to Mr Wheeler, we know that there’s an unscheduled stop for June on the way, so maybe it’s curtains for Luke as well…

If you didn’t feel at least a little bit of ner-ner at Serena’s predicament, you are a better person than I am. OK, OK, there were moments where I felt a bit sympathetic. The terrifying birthing room hidden at the top of the house; the creepy doctor who asks her out while she’s practically still in stirrups … It’s Handmaid treatment, but the Premium version; doctors offer to impregnate Handmaids to do them a favour (Ew. EW) whereas Serena gets asked out to dinner (also ew, but with food). Handmaids have a double-decker birthing stool, but Serena gets a bed. LUCKY HER, eh? But she’s still going to be locked in the attic while people scheme to steal her child. So it’s not going great. If there was ever any doubt, that is dispelled when Serena annoys Mrs Wheeler and is sent to her room like a naughty child. Serena’s power disappears in a flash; it was always an illusion and Mrs Wheeler shatters it. Rather than fight her, Serena obeys. What else can she do? She retreats to her room and weeps. How many times did she do this to June? Quite a few, just in case you were feeling sorry for her.

When faced with a vicious Wife, she seeks an alliance of sorts with the terrible Husband, like she’s following June’s survival handbook. Mr Wheeler reveals that it’s his private militia holding June and Luke, and that he is planning to send Ezra to No Man’s Land to kill June rather than risk June’s allies in Gilead letting her go. Serena immediately asks to go with Ezra, so that she can get closure from watching the execution. She has to work her persuasive mojo here, with her big sad eyes, and Wheeler relents. She gushes her thank yous, because she’s good at this.

Whether she truly wants to see June dead or not, being allowed out of the Wheeler house with Ezra provides the only potential escape opportunity that she can see. No one else will come and save her; this is her only chance. Maybe she thought she’d watch a nice execution and then try to persuade Ezra to help her using those big sad eyes again. But Ezra seems more like the loyal goon type, not a morally constipated Nick 2.0. She must have known that was unlikely. Ezra’s been instructed to bring Serena back again at the slightest sign of discomfort, so Serena is masking what looks like early contraction pains. BODES WELL.

And just like that, Serena and June come face to face again, but this time, June’s not the one with a gun.

I choose to believe that what Serena did next was what she planned all along. Why else would she ask Ezra to unbind June’s hands, and to give her the gun to let her pull the trigger herself? Maybe I’m giving her too much credit for planning. Maybe June’s reluctance to shoot Serena in episode 4 was just a favour that needed to be repaid. Maybe it was June’s speech that won her over. But I think it’s more that Serena got a taste of her own medicine with the Wheelers, saw how desperate it made her, and simply switched sides to save herself from a worse fate. She made June squirm for a while first, to sell it to Ezra. And because she’s mean. And because it makes a more satisfying twist when … BOOM. Serena shoots Ezra, and it’s on. She orders June to get in the car with her, and drive, leaving Ezra groaning in the dust, the bullet lodged in his hidden vest. Someone knew this was a risk, and planned accordingly; was it Ezra or Mr Wheeler? Serena doesn’t stop to finish Ezra off, because between the twist and the contractions, there’s a lot going on, and maybe she’s not quite that murdery. Yet.

Welcome to the team, Serena. I guess.

Next time: Serena and June have a lovely road trip. Will they become BFFs? It’s a long shot…


← With Two Losses In A Row, Is It Time For The USWNT To Panic? | Why No One's Talking About Brendan Fraser's New CW Series, 'Professionals' →