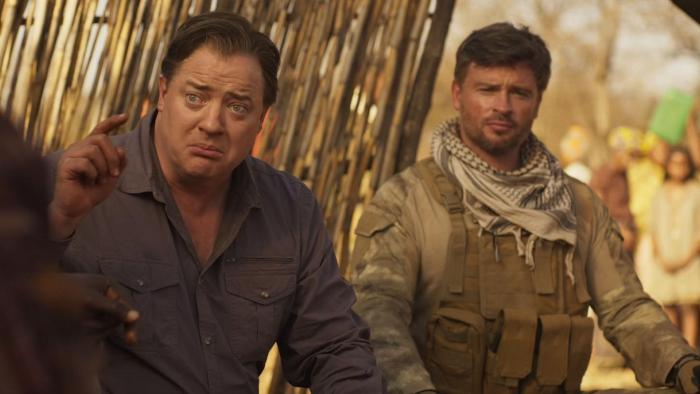 Brendan Fraser is having a moment. He’s getting a lot of attention for his performance in The Whale, he’s been tapped for Martin Scorsese’s next film, he’s recently completed a film with Josh Brolin and Peter Dinklage, and fans are crestfallen over the cancellation of Batgirl. There’s also genuinely a lot of goodwill toward Fraser on the Internet — the reverence is almost Keanu-like.

What most people don’t realize, however, is that he also has a new television series that debuted this week on The CW called Professionals, where he stars alongside Tom Welling.

There’s a reason for that.

The Professionals is actually a 2020 Swedish production loosely based on the 2014 film Soldiers of Fortune, and the CW got the international rights to re-air it. It premiered this week after the debut of The Supernatural prequel, The Winchesters.

It’s bad television, and no doubt CW licensed it to take advantage of the Fraserssance, like Netflix pulling a straight-to-Redbox before-they-were-famous title out of the vault and placing it on their New Releases. I watched the pilot, and as bad as it is, there’s an amusing novelty about it. Not to overstate the talents of Fraser (and even Tom Welling), but it’s a bit like watching Broadway actors join a high-school theater production. There’s a clear contrast between what they’re doing and what everyone else.

The very short version of the plot is this: Fraser plays Peter Swann, a billionaire scientist who attempts to launch a satellite into space that would be able to detect pandemics early. The rocket explodes. He hires a former counterintelligence spy, Vincent (Welling), to help him figure out who was behind the sabotage. Swann has to buy an entire hotel in order to check their surveillance footage. Vincent has problems of his own. He had to steal a briefcase full of valuable information from an Interpol agent and hand it over to a mob-like criminal to get his brother out of debt. Meanwhile, Swann’s girlfriend — the lead engineer on the satellite — is also the ex-girlfriend of Vincent, so there’s some friction there.

Fraser is the smug but likable rich guy; Welling is the gruff spy, and everyone else is a broad stereotype. It’s obvious that 90 percent of the budget for Professionals went to Fraser and Welling, because what’s left looks like a television show shot with a second-generation iPhone and edited with MS Paint. The writing is atrocious, but both Fraser and Welling can still turn a decent wisecrack, which elevates Professionals from deeply unwatchable to vaguely interesting for a few minutes before it devolves back into deeply unwatchable. Fraser is great, but he’s already been paid and moved on to better projects, so there’s little reason to give this a second thought.