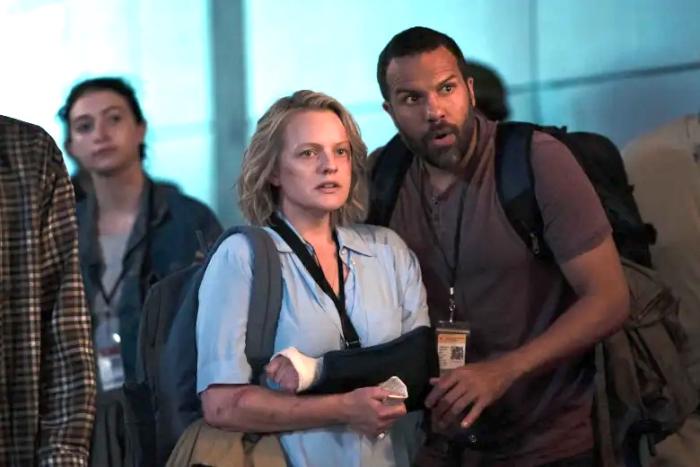 ‘The Handmaid’s Tale’ Recap: If We Met At Midnight In The Hanging Tree

Previously, on The Handmaid’s Tale: The American rescue mission failed, and June declared herself fully on Team America after she realised Lawrence sucks. Nick wouldn’t turn on Gilead because he kind of sucks too. Aunt Lydia got to be comic relief. We cheered on Serena as she escaped from the Wheelers with Noah in her arms. And someone tried to shoot June at a memorial service. Here’s my full recap for episode 9 if you missed it!

This week: Bad things are coming for all our faves, and difficult choices need to be made. Most people have reached the point where they have had enough, and so there are some heroic decisions to say ‘sod it, I’m done’, and hang the consequences. Even if there are, uh, hanging consequences. Spoilers are ahead for the season 5 finale; let’s load up our merry murdering playlists and bop to some tunes as we bid farewell to The Handmaid’s Tale for another year.

The American neighbourhood in Toronto is emptying out; the refugees living there have survived one horrifying uprising, and they aren’t keen to see another. The shooting from the memorial was apparently committed by a Lone Wolf, not explicitly connected with Gilead, just an angry dude being angry at refugees. But there’s lots more of his kind where he came from. Not enough to call them a Pack of Terrorists, of course, just lots of Lone Wolves. Nothing to see here. Remember the cute days when Canada was the Handmaid’s Happy Place? Sob. With all these independently motivated and not at all radicalised Lone Wolves around, June and Luke have to take some precautions. June makes the defensive choice of a bulletproof vest, whereas Luke gets himself a gun. Was anyone else convinced the parcel delivered to the house was going to be a bomb? The Dread had me tense from the start, y’all.

Precautions are good, but there are gaps in June’s risk assessment, like walking in the road rather than on the pavement. Sure, Lone Wolf 2 could have driven onto the path to aim at her, but come on, June. Make him kerb it at least. Lone Wolf 2 mows her down mercilessly with his truck, all the while blaring out ‘Kokomo’ by The Beach Boys, which is an odd choice for a murder playlist, but that’s probably the last thing to judge him for. I’m focusing on that so that I get the image of the wheel going over June’s arm out of my head. Shudder.

Lone Wolf 2 knocks her down, then runs her over, pauses, sticks it in reverse and almost finishes the job, but Luke charges at him. They fight and Luke beats the crap out of him. June is rushed to hospital, gravely injured, and Luke is taken away for questioning.

News of this spreads to Gilead and has some surprising effects across the border, spurring Nick and Janine into action.

Nick was already mad about the shooting, suspicious of Lawrence and his psychotic buddies. He lays down some rules: “She’s not a target, Commander.” Ooh, forceful! I like this new Nick! Lawrence plays the Shaggy defence (“It wasn’t me!”) and then scarpers.

Next time we see Nick, he’s come to the border to meet Tuello, and is then escorted to the hospital to see the aftermath of the latest attack on June. He visits her as she lies unconscious, wrestling with his conscience and looking very constipated indeed. A kiss to her forehead and he’s gone, keen to avoid bumping into Luke.

If he wasn’t ripe for turning before, he is now. Visiting June was a term in a contractual arrangement with Tuello, and Chin Dimple is very pleased to have finally recruited Nick to his team. Nick vows to keep his end of the mysterious deal, as long as Tuello keeps June safe. Tuello is a bit cagey about the limits of his power when it comes to protecting June, but Nick presses for further reassurance. He’s used to slippery contracts. Tuello asks him why he didn’t run before, knowing that he has had plenty of chances. “I’m nothing,” Nick says. “Not to her,” says Tuello. What’s the arrangement? Is Nick going to download all of Gilead’s secret files? Assassinate the leaders? Send some of the really good muffins?

Well. If I may make an analogy: in one of my favourite films, there’s a character who spends the entire movie hyping himself up, only to trip over at the crucial moment and knock himself out. (Yes, I am talking about Spy. Don’t judge me.) That’s what Nick’s next move feels like to me. He storms into Lawrence’s wedding party, punches him in the face and is immediately arrested. Lawrence plays the Shaggy defence again, even less credibly this time. Rose visits him in prison to (effectively) dump him as well. Surely, Tuello did not spend all this time trying to recruit Nick just to make him punch Lawrence in the face. That can’t have been the deal. Unless this is part of a wider and more elaborate ruse — and if it is, I will take this back — we’re left saying “really? REALLY? That was your big move?”

I will, however, give Relatable Points to Lawrence. How should one respond to a violent and embarrassing smack to the face at one’s own wedding? Turn away and demand cake. Naturally.

Aunt Lydia’s softer treatment of Janine has not gone unnoticed by others, and she’s under pressure to post Janine to a household. She really has changed, hasn’t she? Smiling fondly at the ‘girls’ when she hears them singing, and pulling in all her favours to get Janine a posting she would consider safe and relatively happy: in the Lawrence house. From Lydia’s perspective, it’s perfect. She sees Lawrence as less cruel than the other Commanders, and Naomi has shown a softer, more pliable side with Lydia — she’s someone Lydia can work with. Plus Janine will be able to see Angela every day, and we know that Lawrence refuses to participate in the Ceremony. It’s the best she can do, especially considering the other options available for Janine. Naomi takes some persuading, but she’s feeling fairly miserable about what life will be like as Mrs Lawrence, so from her perspective, she sees Janine as a friendly face. Janine has been careful to be sweet and (ugh) grateful around Naomi recently, so even though Naomi tries to be all authoritative and tough, part of her is nurturing a hope that this will be a peaceful arrangement.

Janine, however, hears about June’s attack from a Martha and she is thrown. She is furious. “My June?” she says, shocked. She stumbles through the day in a blur, and when Naomi tries to get all chummy with her, she snaps. Naomi is not her friend. June is. Janine’s had enough. No more pretending. Mirroring June’s honest confrontation with Serena, she tells Naomi that they are not friends, that she hates her and she always will. This happy family is not going to happen.

Lydia is devastated. It’s a posting or (presumably) Jezebels, and she is trying to protect Janine. But Janine doesn’t want her help. She wants to go out on her terms. And then the Eyes arrive to take her away, allegedly called by Lawrence. Lydia tries desperately to stop them, but Janine’s taken to the ominous black van, and sits calmly, comforting her fellow prisoner, awaiting her fate.

Back in Canada, June is out of hospital but when Team America hear that Lone Wolf 2 died of his injuries, it’s time to run. The police will be coming for Luke, and the mood of the nation is so anti-refugee that there will be no leniency. They didn’t run in time before, and Gilead swallowed them up. They won’t take that risk anymore.

“America wasn’t Gilead until it was, and then it was too fucking late. Luke, we have to go. We have to run. Now.”

Tuello agrees, giving them documentation to help them get past ID checks, and tickets for one of the trains taking American refugees away to safer territory in the west. He promised Nick, after all.

It’s chaos at the station. Refugees have come from across Canada to be shipped off elsewhere, plus the station is full of cops looking for Luke. It soon becomes apparent that they have no chance of passing through unseen. And so we have another sacrifice, this time Luke. He sends June ahead with Nicole, and gives himself up to the police, causing enough of a distraction that they don’t look too closely at June.

“June, we’re going to find each other. We always do. Get on the train. Take care of our baby, OK?”

Oh, Luke, you adorable poppet. Take your hero moment and shine. All the guilt from the last failed escape attempt dissipates. No-one will call him a coward anymore.

Although the vision of ‘undesirable’ refugees being sent away on trains is ominous as hell, the train escape feels hopeful, and less milky and refrigerated than the last one at least. It’s packed, and June is struggling with Nicole and the stroller, with her arm still in its cast. (Don’t think about the arm again. Shudder. Just sing ‘Kokomo’ again, and try not to vom.) She inches up the train, looking for somewhere to sit and rest, and when she hears a baby crying ahead, she makes a beeline for it, happy to find a potential friend for Nicole. Who could it possibly be?

Did anyone have ‘June and Serena riding off into the sunset together’ on their bingo card? OK, it’s not quite that. The sun’s already set. But hooray for my fellow suckers everywhere, because when they come face to face again as equals, and Serena smiles, my suckery heart soared. June may have given a weary sigh and a sassy eyebrow twitch in response, but that’s the promise of a reluctant buddy comedy coming up, and if we can’t have Lawrence and Lydia hi-jinks, gimme all the Jurena ones instead. TEAM JUREEEEENA FOREVER!

If Lawrence called the Eyes, is there any chance he’s secretly having Janine rescued, or am I being a sucker again? I keep saying LAWRENCE IS NOT YOUR FRIEND but I don’t want to believe that when it comes to Janine, dammit. STOP BEING MEAN TO JANINE!

Is Nick going to come back from this? Does he have any Eye buddies who might help him out? Is this part of a plan?

Will Nick and Janine end up in the hanging tree on the Wall together?

Will Luke face a fairer trial than them? Will he and June find each other again? He will have Tuello, Moira, and Rita to help him organise his defence, so that’s something.

As Lydia watched the van depart, her eyes narrowed in anger. I think — I think — she is about to go full dracarys, and I can’t bloody wait.

Until next time: Don’t let the bastards grind you down!