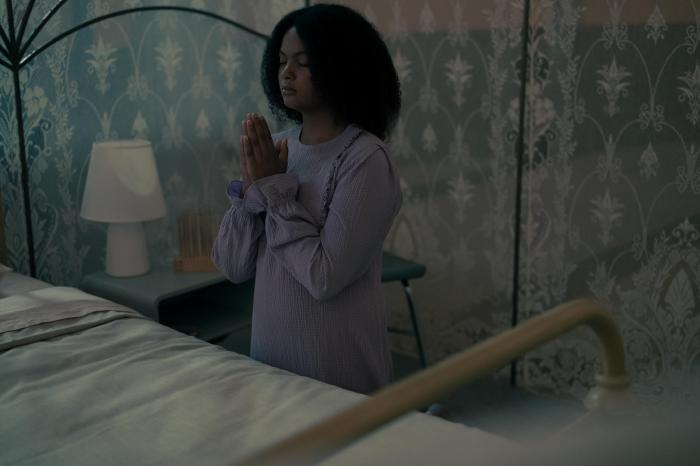 ‘The Handmaid’s Tale’ Recap: The Home Of The Brave

Previously, on The Handmaid’s Tale: Lawrence launched his grand plan for New Bethlehem, revealing his sales pitch and what passes for a conscience. June was seriously tempted to move there to see Hannah, but Tuello made a counter-offer of a military raid to rescue her instead. Serena was reunited with Noah but has to play the docile Handmaid in the Wheeler house in return. Here’s my full recap for episode 8 if you missed it!

This week: June’s firmly in Team America now. Not the one with the puppets, but the nation that’s barely clinging on to continued existence. Episode 9 is a pledge to the flag, and the ghost of the republic for which it stands: a partial nation under God, fractured, with liberty and justice for all, as long as Canada and Gilead don’t ruin everything. It’s not quite as catchy, huh? Spoilers are ahead for episode 9, so place your hand on your heart, say a prayer to the land of the free and the home of the brave, and let’s send in the planes!

Many moons ago, I spent a year teaching in America, and I still remember that very first lesson; all the kiddies were in, my resources were prepared, and I was at the front, ready to blow their minds with my funny-accented wisdom. The bell rang. I opened my mouth. Before any words came out, they all stood up, turned 45 degrees to the right, and started reciting something in that tone of voice that British readers will know as School Assembly Voice. No one had warned me about the pledge thing. Why would they? It was entirely normal for them all. To an outsider, it was weird. I may have described it as creepy to my friends later. I’m sorry. My point here is that symbols of national identity are moving and important on the inside, but weird from the outside. I may poke fun at them a little here. I do so fully aware that I am from the nation of commemorative Royal Wedding tea towels. The whole Queen’s funeral thing was probably very weird to you; I cried when the Queen’s pets showed up for the procession in Windsor. I get it. Are we good? Are we even? Cool.

Team America then. It has Mark Tuello, Lord of the Chin-Dimples. It has the reassuringly hot military guy, Elijah. It now has June. It’s trying to get Nick (sigh). It’s still displaying its Stars and Stripes, despite enemies all around, both of the anti-refugee Canadian and exterminatey Gileadean variety. The flag flies with the magic of its past among its foes, bringing together a crowd to pay tribute and to re-dedicate themselves to the cause, in defiance of the hecklers and the protesters. It endures. Even as shots are fired at it, its fabric suddenly scarred with bullet holes, the Star-Spangled Banner yet waves. In the world of The Handmaid’s Tale, the American Dream has taken a few turns, but it persists, the dream of equality, justice, and democracy persevering against all the overwhelming odds stacked against it. It’s a dream that they live and die for. It’s kind of beautiful.

It’s just that when the little girl comes forward to stand in front of the flag of an almost extinguished nation and a picture of her reassuringly hot military daddy, who just died in the line of duty, and she starts to pledge her allegiance to a country she’s probably never set foot in, it starts to feel kind of … weird. She stumbles over the unfamiliar words, tripped by nerves and grief, her mother weeping behind her. It’s a memorial for the fallen; it doesn’t really feel like the time for recruiting children. Especially when she is standing in front of a target. It’s a little bit creepy. Even (whisper it) a bit culty.

But ‘Allegiance’ is the name of the game this week, so that’s where we are. Who you say it to, and how much you mean it when you do — that’s what we’re looking at this week.

The American armed forces going in to rescue Hannah and the other girls at Wife School are fully fledged and pledged patriots, ready to do whatever it takes to complete the mission and fight for the cause. They are basing their mission on the intel June and Luke brought back from Gilead plus the video footage Lawrence gave them as proof of life for Hannah. They are under the misapprehension that Lawrence pledged his allegiance to June. He didn’t. HE IS NOT YOUR FRIEND. Turns out that the school is better protected than the intel suggested; all the Americans are killed in action, and Hannah isn’t going anywhere. (That’s both good and bad: Hannah is not rescued, but she is still Hannah at heart, not Agnes, as her secret breach of the no-writing rule shows us. Her name is her own personal flag, and her loyalty to it endures.)

Serena, by contrast, has to perform allegiance for the Wheelers whilst trying not to erase herself. Genevieve Angelson is having an absolute blast playing the hideous Mrs Wheeler, and because we don’t feel too strongly attached to Serena, we can sit back and enjoy the power play between the two women rather than finding ourselves too disturbed.

Also highly enjoyable: the unlikely buddy duo of Lawrence and Lydia, both of whom are still terrible but have some useful pangs of conscience from time to time. Lawrence has asked Lydia to help him propose to Naomi, Creepy Warren’s widow, who Lawrence had shot at breakfast in front of her. It’s kind of like when Richard woos Anne over her husband’s coffin in Richard III, except Richard uses his persuasive mojo and Lawrence just looks shifty and uncomfortable and has to be saved by Lydia.

Lydia: “Commander? Might I suggest you convey your intentions?”

Lawrence: [stammering] “Right. So basically, it’s a quid pro quo. You need security, I need to represent traditional Gilead values, so you can move in here with the kid, if you want.”

Lydia: “As his new wife and child. A sacred union, of course.”

Aw, the romance. I can’t think of a worse duo to do a proposal bit. He’d have been better off with a Handmaid flashmob dance routine to Bruno Mars’s ‘Marry You’. Is this a match made in hell? It’s convenient for Lawrence, as no-one will be able to hold his status against him in his rise to the top. Naomi is vulnerable and could certainly do worse, and she’s had a few almost sympathetic moments this season too. Lawrence won’t be actively cruel to her, and even though he’s still terrible, he won’t do the same terrible things as Warren. Naomi doesn’t repel Lawrence like Serena did with her equally cold and uncomfortable proposal to him.

Lawrence: “What do you say?”

Wait, Lawrence and Lydia are now the comic relief? I don’t know what has happened, but I am HERE. FOR. IT. I want full unlikely buddy comedy antics from now on. I want them lost on a road trip. Bickering over what to buy Naomi for her birthday. Trying to assemble flat-pack furniture together. All of it. Naomi agrees to think about the proposal, but she’s currently veering between bemused and horrified. Her allegiance is assumed, but it’s hers to give if she chooses. Thanks to Corinthians.

Back in Canada, June doesn’t renounce her allegiance to America when the mission fails; her faith is renewed. This is partly because Lawrence’s phone call to her backfires spectacularly. He claims to be sorry for the “bloodshed” but says that that’s what happens when “you threw your lot in with the Americans”. He repeats his offer for her to move to New Bethlehem, so she can be with Hannah, and be neighbours with Nick, but now he adds a new demand: that she goes public against the mission, to make “Gilead look like the victim” of American aggression. It’s a hard no from June. “Do you think that you can dangle Nick in front of me and I’ll do whatever the fuck you want?” She’s had enough of his pleas that he’s trying to fix it from the inside. “You are still a part of it; you are one of them. It’s even worse because I know you know better.”

And then it’s time to burn the Lawrence bridge for good. He brings up his dead wife, saying that he’s doing what he promised Eleanor. On the other end of the phone, June smirks. It’s on.

June: “Eleanor hated you. She couldn’t stand the sight of you. She was so broken and so ashamed of the man that she loved that she’d rather be dead. I watched her die. I did, I watched her die, and I did nothing. Nothing.”

Lawrence: “I knew you had something to do with it. But Eleanor would still want me to help you with Hannah. So come back.”

June: “I want her here. I want my baby here. Safe and free. Please.”

June: “Then go fuck yourself.”

She promptly signs up to Tuello’s team. Tuello is still hoping to turn Perpetually Dangling Nick, to get him to defect to their side with full immunity. He tells June that Nick has turned down this offer already but that it’s still on the table, so he dispatches June to have another crack at him. Remember: Nick needs immunity, because he was actively involved in the initial coup that brought about Gilead. The resistance associations came later. He wasn’t just some guy who made the best of a situation that happened around him; they didn’t make the nice people Eyes. That’s one of the reasons I’m mean about him. (It’s also mostly because it’s fun!)

Nick’s pledged allegiance to Gilead though, and he’s not budging. He believes in Lawrence, in fixing things from the inside. He claims his wife is happy there. (Sure, Nick. Sure.) He has a child on the way, and (presumably) he feels he’s got time to make Gilead a better place before the child is old enough to notice. They exchange messages of love, but they are firmly on opposite sides of this war now.

There’s time for a gathering of Wives and Husbands (and Lawrence and Lydia), all of whom are very pleased with themselves and still being awful, so any significant change to The System is still a long way off. China, Russia, and North Korea are all cheering for Gilead, for “sticking it to the Americans”. Blaine’s moving battalions of troops to the border ready for an attack on Canada, to teach them a lesson about being friends with America. And Commander Mackenzie’s still suggesting that Gilead quietly assassinates June. So. Good job, Nick. Way to go, Lawrence. Great friends you’ve got there. So much good you’re doing.

Meanwhile, Serena chooses her moment carefully to escape the Wheelers. She pledges allegiance to herself, to her son, and to the nice if slightly shocked woman who nearly runs her over as she flees from the fertility centre with her baby in her arms. Go, Serena, go!

The episode ends where my recap began, with the pledge of allegiance that ends in violence. A promise to commit to a dream, in defiance of the powers assembled against them. When gunshots ring out, June throws herself in front of Elijah’s child, protecting his daughter as he swore to save hers. One of the bullets narrowly misses her, hitting the flag right where she had been standing moments before. Was this Canada’s anger? Or Gilead’s revenge? I guess we will find out next week…