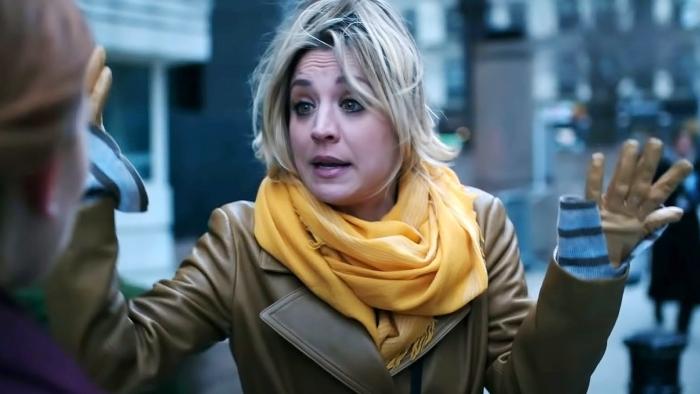 How Long Has Kaley Cuoco Been Hiding in Plain Sight?

One of the joys of HBO Max’s new comedy-thriller The Flight Attendant — of which there are many — is the realization that Kaley Cuoco is kind of amazing. I had no idea. It’s not that I don’t know who Cuoco is, it’s that’s she’s been hidden away for the last 12 years on a terrible CBS sitcom, and “terrible” is my most charitable assessment of The Big Bang Theory. Granted, I’ve never seen more than a few episodes, but in my estimation, no one could transcend either the obnoxious laugh track or the even more obnoxious nerd stereotypes (TBBT claims to celebrate nerdery, but it does so at a condescending remove — it’s a “comedy” from the guy who wrote Two and a Half Men that is about nerds, but — unlike Community — it was never a show for nerds).

In either respect, to the world outside of TBBT, Kaley Cuoco has largely been hidden beneath a giant rock that wears glasses and snorts. I vaguely recall her playing a Kelly Bundy type character on 8 Simple Rules, but aside from TBBT, Cuoco hasn’t ventured very far into view for the rest of us, save for a very bad 2015 rom-com with Kevin Hart and Josh Gad called The Wedding Ringer that we placed on our most forgettable movies of the decade list. Cuoco hasn’t even hosted Saturday Night Live yet. Why hasn’t she hosted SNL?

Given her performance in The Flight Attendant — which Cuoco optioned from a Chris Bohjalian novel before it was even published and then cast herself in the lead — she’d be very well suited to SNL. She’s funny and relatable, and a mess, but not a har har mess or even a Requim for a Dream mess, but an, “Ooops, I drank too much, blacked out, and woke up next to a dead body” mess. Given the show’s premise — trying to piece together scattered memories of a drunken night that ended in murder — The Flight Attendant should be darker than it is.

But it’s not. It’s funny. And fizzy. And tremendously entertaining. Susanna Fogel — who wrote The Spy Who Dumped Me and co-wrote Booksmart — directed the pilot, and the series has some of that same energy. It’s like they thought, “What if we took a Fincher-esque thriller and just … decided not to take it so seriously?” The writing is there. The mystery is there. But the secret ingredient is this: It’s also fun to watch.

Much of that can be credited to Cuoco herself, who plays a flight attendant who is unapologetic about indulging in the alcohol and one-night stands that accompany the job. Cuoco’s character, Cassie, drinks more than a Dashiell Hammett detective, but she doesn’t wallow in it. But then, just because she’s an unapologetically promiscuous boozer doesn’t mean that she doesn’t take the murder investigation seriously — she is, after all, the chief suspect, and the only way to clear her name and avoid prison is to find the person who actually killed the man sleeping next to her in bed.

Cuoco is surrounded by a solid supporting cast, including Michiel Huisman as the dead man who speaks to Cassie in fantasy sequences; Rosie Perez and Griffin Matthews as work colleagues; Zosia Mamet as her best friend and lawyer; T.R. Knight as her brother; and Michelle Gomez as someone who is up to no good. As many scene-stealers as there are in The Flight Attendant, however, we never lose sight of the fact that this is Cuoco’s show, and she is far from the kind of lead character who is the worst thing about her own show. It’s a great series, and Cuoco elevates it to even great heights, and I can’t believe I’m writing this about Penny from The Big Bang Theory.

Genuinely, The Flight Attendant is a seriously fun mystery series, and while HBO Max is parceling it out in episode chunks of 3, 2, 2, and 1, it’s not enough. It’s less of a binge-watch, and more of a gorge. In nearly every second of it, I marvel at how criminally little Cuoco has been exposed to those of us outside the TBBT fray — I almost wish she had a back catalog of movies I could discover, because there’s not yet enough The Flight Attendant to satiate my Cuoco fix.


← What the Ending of HBO's 'The Undoing' Says About Us | 5 Shows After Dark: 'Filthy Rich' Series Finale Fox, 'The Disney Holiday Singalong' ABC →