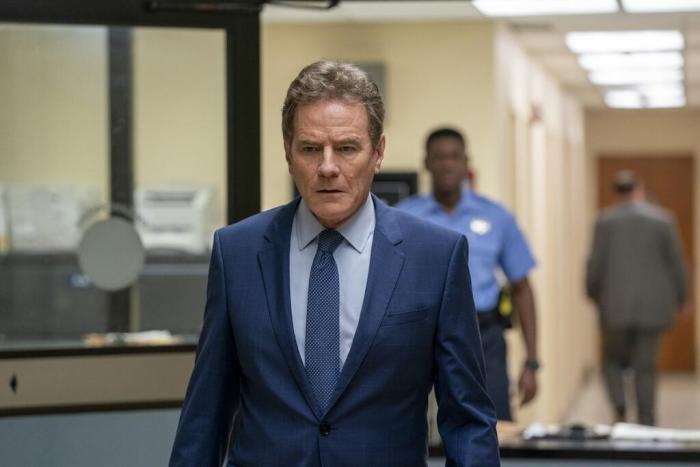 Previously: While experiencing an asthma attack, Adam Desiato (Hunter Doohan) inadvertently hit a motorcyclist while reaching for his inhaler. After calling 911 and trying to resuscitate the motorcyclist, Adam leaves the scene in a state of shock. The motorcyclist dies. Adam eventually comes to his senses and confesses to his father, Michael (Bryan Cranston), a popular local judge. Michael plans to turn his son over to the police and explain that it was an accident. At the police station, however, Michael learns that the deceased is the son of a violent local mob boss, Jimmy Baxter (Michael Stuhlbarg).

The Dilemma: Does Michael turn his only son over to authorities knowing with 100 percent certainty that it’s a death sentence because Adam would be murdered by the local mob boss, or does Michael risk his personal reputation and commit an additional crime by trying to cover up the accident to protect his son?

Episode Two: The Complication: In the first episode, Michael does what most reasonable fathers would do in that situation: He protected his son from certain murder by covering up his accident. He can handle the legal system; he cannot handle a mob boss.

In episode two, Michael calls his very well connected buddy, Charlie (Isiah Whitlock Jr.), and asks him to dispose of the car, but not to tell him how or where he disposes of it.

Soon thereafter, Michael reports the car as stolen, and he’s paid a visit by Detective Costello (Amy Landecker), who is determined to find the car thief. In the meantime, Charlie apparently assigns a 17-year-old Black kid, Kofi Jones (Lamar Johnson) to dispose of the car. Unfortunately, the police pull Kofi over for running a stop sign and treat him like police officers too often treat Black men. He’s hauled into the police station, and while there, the car is reported stolen. Kofi is implicated in the murder of the mob boss’ kid, Rocco Baxter.

Dirty police officers take Kofi out in the middle of nowhere and try and torture a confession out of him. Because he was only asked to dispose of a car, he has no idea what they’re talking about. Eventually, however, they pin the murder on him, and Charlie’s people tell Kofi to plead guilty and take the fall for the murder, or they’ll hurt his family. He does so — he pleads guilty. Jimmy Baxter, undoubtedly, will have him killed in prison.

The Dilemma: In protecting his son from Jimmy Baxter, Michael has buried himself under another layer of lies, and now Kofi will spend his life in prison, where he’ll probably be murdered by Jimmy. Does Michael turn his son in now, knowing that — again — he will be killed? Or does he continue to cover up the crime?

Michael is trying to play it down the middle at the moment and ensure that Kofi gets good legal representation, but at what point do the scales tip in favor of essentially giving his son over to die? The dilemma is morphing into a trolley problem. How many people have to be on the other track before Michael lets the train hit his own child?