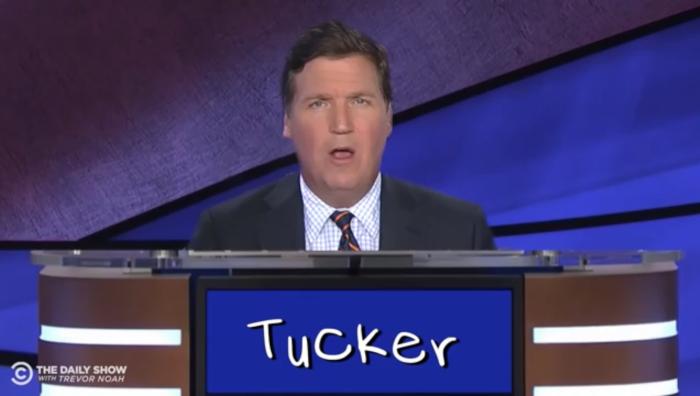 ‘The Daily Show’ Is About To Ruin Your Favorite Game Show

When thinking about the problems facing our planet, it’s easy to overlook those who are … problem adjacent. Parasites who cannot exist unless SOMEthing is wrong. Despicable “human beings” who make their money by stoking the fires of anxiety in which many citizens are constantly engulfed. Unforgivable assholes that seek to prey on people’s fears and prejudices. Vile, slime-filled… look, I’m talking about Tucker Carlson. That’s clear, right?

Carlson is a FOX News talking head, who regularly distorts the truth and consistently attempts to divide this county. He lobs falsehood-laden, hysteria-inducing monologues, laughs maniacally, and calls it news. Usually, he does it under the guise of “just asking questions” which, as the folks at The Daily Show have deduced, makes him a perfect Jeopardy contestant and clue.

In this bit, Carlson is hilariously edited into Jeopardy footage. As a clue, he says the hateful, nonsensical things he’s known for. As a contestant, he asks his stupid, rhetorical questions. It is as funny as it is absolutely nauseating. I’m hoping that next time I watch Jeopardy I won’t see Carlson’s big, dumb face in my head, because this is the kind of joke that lives in your nightmares.

It doesn’t even live there rent-free. But, like, it’s not paying me rent, I’m paying it.

← 'Top Chef' Crowned a Winner; The Next Day, He Was Publicly Outed as a Creep | Hell is Empty, and All the Devils Are in 'Paw Patrol: the Movie' →